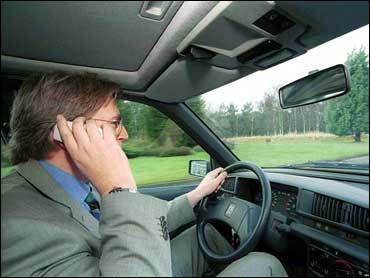 Harvard researchers estimate about one in 20 U.S. traffic accidents involve a driver talking on a cell phone, but say laws banning cellular phone use while driving would cost society about as much as it would save.

"We calculate that around 2,600 people die each year as a result of this use of the technology," said researcher Joshua Cohen of the Harvard Center for Risk Analysis. Another 330,000 are believed injured.

As CBS News Correspondent Sandra Hughes reports, in one high-profile case, supermodel Niki Taylor - a spokesperson for Nokia cellular phones - was critically injured when the driver of a car she was in reached for his cell phone and crashed.

The cell phone industry is running ads about car phone use, but it also questions the Harvard findings. Both sides admit the data are sketchy because there's no uniform standard for reporting accidents involving cell phones. And industry officials argue aren't the worst distraction.

Tom Wheeler of the Cellular Telecommunications and Internet Association tells Hughes, "It ranges from your CD changer to your heater to talking to the person next to you or worrying about the kids in the back seat."

Or eating, or smoking or drinking, the list goes on and on - as do the studies that show it's dangerous to drive under the influence of anything.

"If the technology weren't there, at least according to these estimates, they would not die. Now you have to keep in mind that the estimates are uncertain," Cohen said.

The figure was reached using current cell phone usage estimates to update a 1997 study. That study looked at phone records of Canadian drivers involved in crashes to see if they were making calls at the time.

The cell phone industry found fault with the projections and their connection to wireless phones.

"It's sort of assumptions built on assumptions," said Kimberly Kuo, spokeswoman for the Cellular Telecommunications & Internet Association. "There are not a lot of substantial findings that allow us to make policy conclusions."

"What I found particularly interesting is how much debate and how much public concern there's been it and how little good data we actually have," Cohen said.

The Harvard study also found that cell phones added to drivers' security, plus made it easier to summon help more quickly for accident victims.

"At this point, the best guess is that the benefits are just equal to the costs of a ban," said Cohen.

The Harvard researchers calculated the costs associated with accidents caused by cell phones, such as medical bills and loss of life. The costs added up to an estimated $43 billion a year - about the same as the researchers arrived at for the value that cell phone owners put on their phones.

New York state banned handheld cell phone use by drivers in June 2001. Six other states have some regulation of in-vehicle use of cell phones, ranging from a one-hand-on-the-steering-wheel rule to prohibiting school bus drivers from using a phone.

Felix Ortiz, a New York assemblyman who fought for six years to pass the ban, is helping lawmakers elsewhere write similar legislation. He also wants New York to go a step further and ban even hands-free use while driving.

"Whether they say I'm crazy or they harass me, you know what? I think I am doing the right thing for the public safety and for the quality of life," he said.

The Harvard study found that a cell phone user has about 13 chances in 1 million of being killed in an accident while making a call; that compares with 49 in 1 million for someone driving without a seat belt.

Other drivers and pedestrians have about four chances in 1 million of dying in an accident caused by a cell phone user, according to the study. Their chance of being killed by a drunken driver is more than four times as high — 18 in a million.

"Just because a technology results in death doesn't mean that we're going to ban it," said Cohen. "Obviously 40,000 people die on the roadways each year, and we don't ban cars."

The statistics are based on an average cell phone owner using 600 minutes a year.

Harvard's statistics update a center study released two years ago that estimated the chance of being killed while driving and talking on a cell phone were about six in a million and 1.5 in a million for other people on the road.

The original study was financed by the center and a grant from AT&T. The second phase was paid for solely by the center, which is supported by money from government, academia and individuals and private companies, including some automakers and insurers.

Cohen said the figures changed because more people are using cell phones, and they have better estimates of accidents caused by cell phone use, including those not reported to authorities.

22 Push-Up Challenge hopes to save the lives of veterans