DETROIT (AP) — Andre Drummond wasn't about to predict where he'd be playing in a couple days.

"Your guess is as good as mine," he said. "I don't know what's going to happen. I'm going to go to sleep tonight and wake up and find out what happens."

Drummond had 31 points and 19 rebounds, and the Detroit Pistons handed the Phoenix Suns their fourth straight loss, 116-108 on Wednesday night.

There's been trade speculation about Drummond, and this was Detroit's last game before Thursday's trade deadline. He had 20 points and 11 rebounds by halftime and finished just two points shy of his career high.

He was asked afterward if the possibility of this being his last game with the Pistons had crossed his mind.

"I've been hearing that for the past four years," he said. "It don't faze me."

The Pistons led 101-94 in the fourth quarter after a 3-pointer by Wood, but the Suns scored the next six points to close within one. Detroit answered with a 9-2 run capped by Jackson's 3-pointer.

It was the 402nd double-double for Drummond, putting him in a tie with Bill Laimbeer for third on the team's career list.

Deandre Ayton scored 26 points for the Suns and Devin Booker added 22. Ricky Rubio had no points and 10 assists at halftime, but he had only one assist and four points the rest of the way.

"We have to continue to grow and mature in order to stay solid, to stay focused for 48 minutes," Oubre said. "I think that's the best teams who can follow the game plan, do what they do consistently for 48 minutes."

Coach Dwane Casey, however, was not happy with rookies Jordan Bone and Louis King, who combined for three points in minimal playing time. 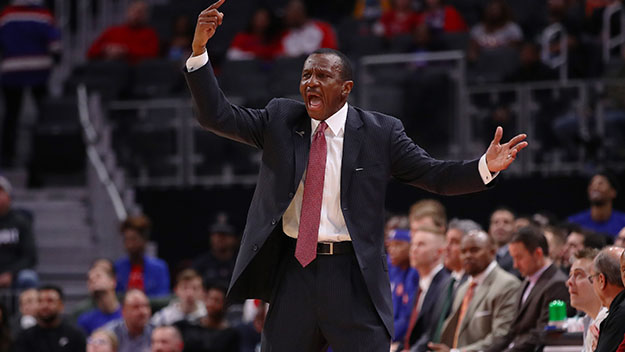 "Bone, Sekou (Doumbouya) and King. Both, I didn't think they played hard enough. I wanted to play them longer, but when you go in, you've got to go in chewing nails, and I didn't see that," Casey said. "I told them, next stop will be (G League) Grand Rapids if they're not going to come in. Because this is an opportunity for them, but it's not going to be given to them."

Doumbouya, also a rookie, started and scored five points in 15:58. King made a 3-pointer in the third quarter, then was immediately called for a technical foul, apparently for taunting.

"Just couldn't get enough of them," Suns coach Monty Williams said. "I didn't think that we responded well to them blitzing (Booker) tonight. I think the simple play is there."

© 2020 Associated Press. All Rights Reserved. This material may not be published, broadcast, rewritten, or redistributed.