BATS! Many people are afraid of them and the only bat that people don't fear is Batman. So why should we care about them? I had the chance to interview Christina Funk an Education Specialist for the Organization for Bat Conservation and we talked about the facts and myths about bats and the most recent threat to Michigan bats.

Why should we care about bats?
"Bats are the primary predators of night-flying insects. They eat large numbers of moths, beetles, and mosquitoes. An individual bat can eat a thousand mosquito-sized insects every hour they are feeding, and they usually feed about 3-6 hours every night. By controlling insect populations, bats are critical to forestry, human health, and they also save the agricultural industry billions of dollars each year."

What kind of myths are there about bats?
"Some common myths about bats include: bats are blind, bats are rodents, ALL bats have rabies (less than 1% of bats actually have rabies), bats get tangled in your hair, bats attack people, bats suck blood, and bats are dirty. People in general fear what they don't understand and bats easily fall into that category! For example, people may assume bats are blind because microbats, like Michigan bats, have very small eyes."

Can bats get tangled in your hair?
"As far as bats getting tangled in your hair, many bats throughout the U.S. (including ALL Michigan bats) are insect-eating bats. Insects are attracted to humans so at nighttime when the bats are feeding, they often swoop around us catching the bugs and people think they can't see so they are going to run into them and get stuck! Many myths are of course amplified by movies and the media, especially in terms of vampire bats."

Are bats harmful to people?
"Bats in general are not aggressive animals. They do not attack people and are afraid of humans, viewing us as predators, and will avoid us when possible. Their first response is to fly away. A bat can and may bite if someone is trying to grab them because they cannot tell us to leave them alone. I always say that anything that has a mouth and has teeth can bite. We can bite! As long as you leave them alone, they will leave you alone."

Do bats have rabies?
"Even though it is very rare, bats can carry rabies, which is a deadly disease. Because there is a small possibility of rabies, it is always best to be safe and never pick-up or move a bat without gloves or a thick towel." 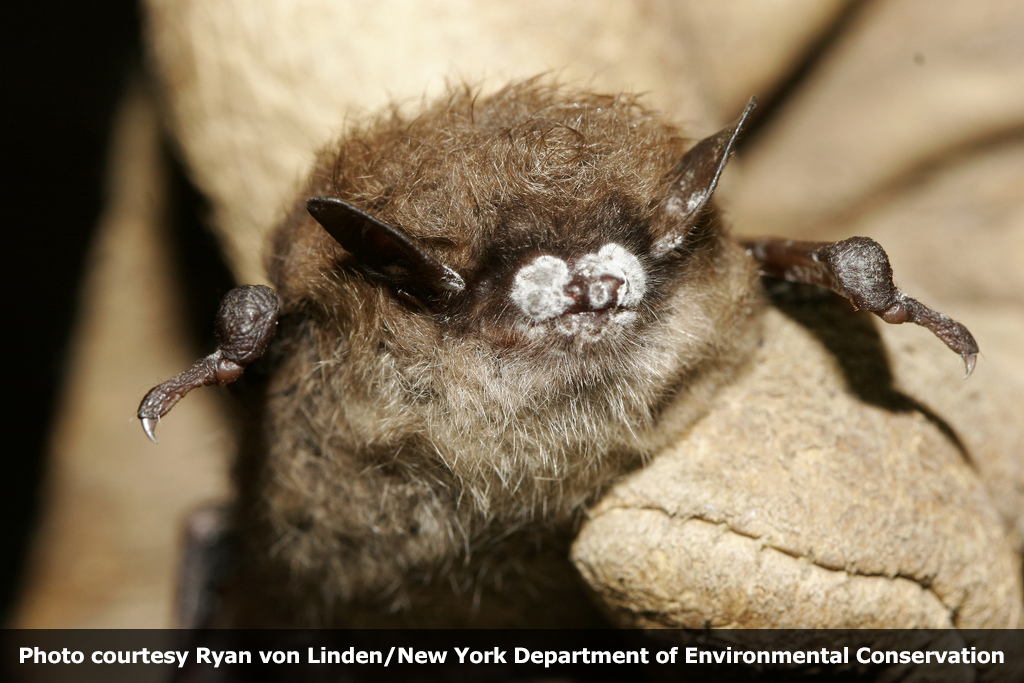 What is the newest disease affecting Michigan Bats?
"White-nose Syndrome (WNS) is a disease caused by a non-native, cold-loving fungus which can be found in the caves of the affected regions. The name of the disease refers to the white fungal growth found on the noses of infected bats, although it is also found on their wings and tail membrane."

How did it get here?
"The fungus is native to European caves where it evolved with the European bats, allowing the bats to coexist and not be harmed by the fungus. The fungus can be transferred cave to cave from the equipment used in each if it is not properly disinfected. It is hypothesized that this method may have been what brought this fungus to the United States. The fungus does not only spread from equipment used in multiple caves, it is also transferrable bat to bat. G. destructans is spread by spores, which are released when the bats try to rub the fungus off of their noses and wings." 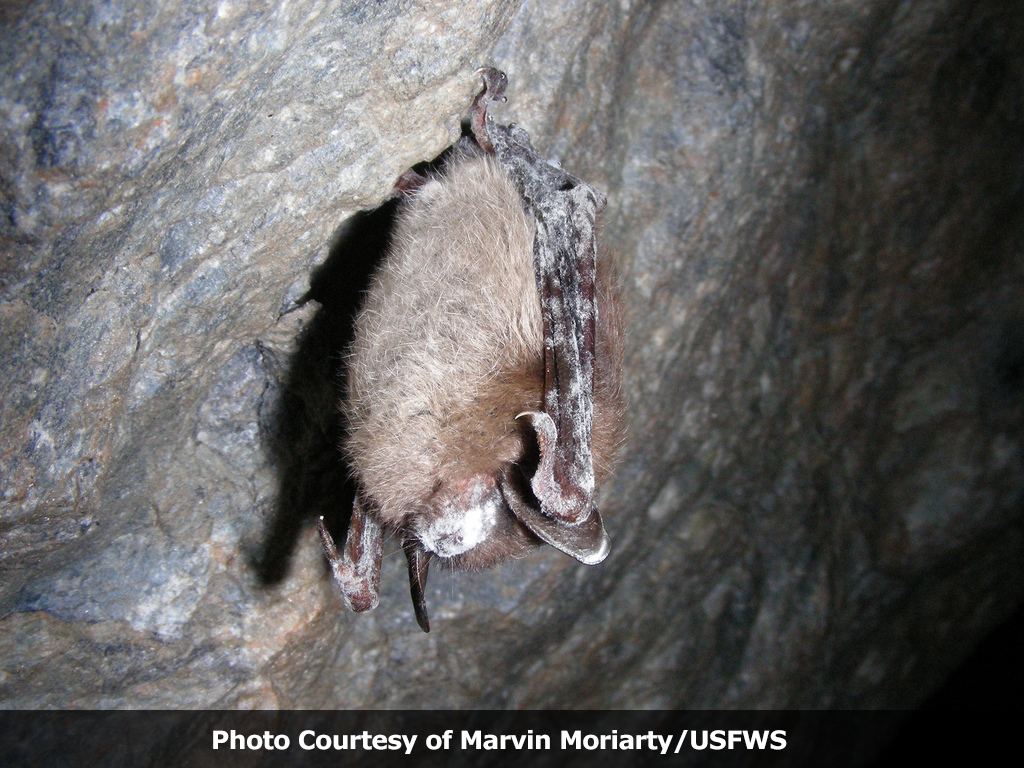 How does this disease affect the bats?
"Research has shown that WNS infected bats are awaking from their winter torpor as often as every 3-4 days as opposed to the normal every 10-20 days. This is considered the "itch and scratch" hypothesis, which means the more irritation caused the higher rate of arousal and use of precious body fat. The fungus damages the connective tissues, muscles and skin of the bats while also disrupting their physiological functions. While bats are in winter torpor their immune system is compromised, because the bats bodies are trying to conserve energy by lowering their physiological activity including heart rate, respiration, metabolism, and body temperature." 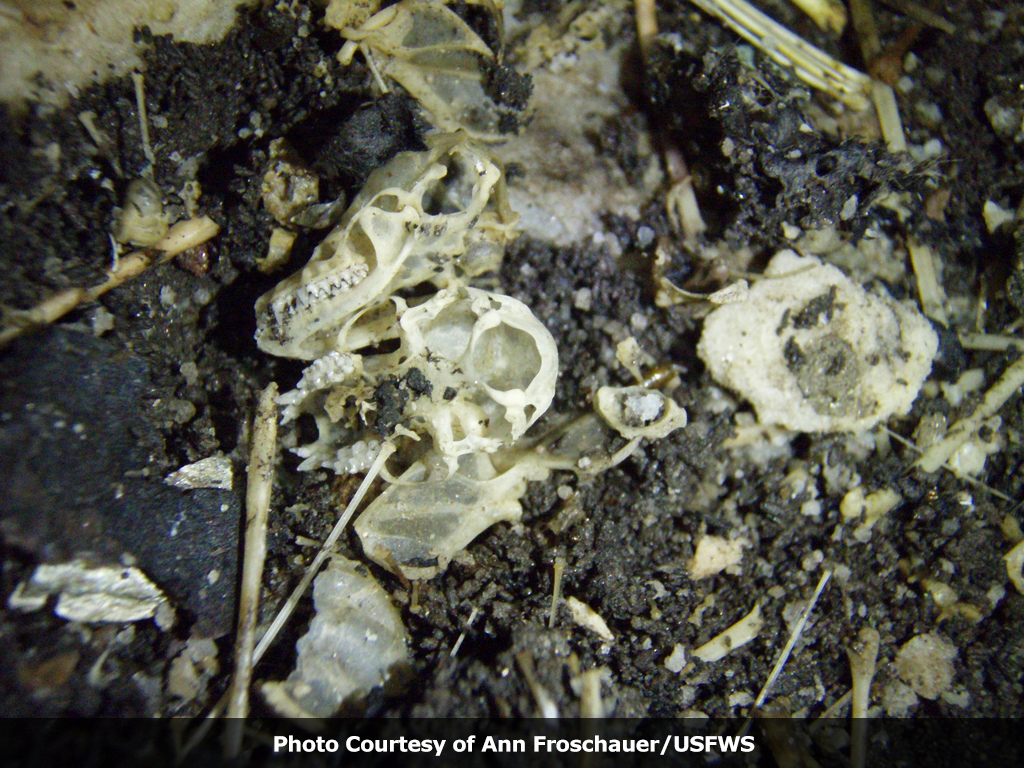 What happens to the bat when infected?
"The bats wake up dehydrated and hungry during the cold winters when there are no insects to eat. Unfortunately, about 90% of the bats affected perish due to starvation. The reason why our bats are greatly affected by WNS is because most species of bats only produce one pup (offspring) per year, so their recovery rate is very slow. The fungus is currently affecting hibernating bat species in nearly half of the United States and parts of Canada. Little brown bats, once a common bat in several areas, are sustaining the largest number of deaths. Caves infected with WNS are displaying 90-100% bat mortality – wiping out most of the cave bat populations."

Can my pet or livestock catch this disease if it comes in contact with a bat infected with WNS?
"No they cannot. The fungus requires a cold body temperature to survive."

Can the public help prevent the spread of more WNS?
"You can help bats survive when they are not hibernating by planting moth-attracting wildflower gardens that attract bugs for the bats to eat. Be sure to garden organically without using pesticides. You can also leave up dead or dying trees to give bats natural shelter or build/buy a bat house to provide alternative roosting sites in your area. In addition to providing food and shelter, you can contact your elected officials and let them know your concerns about WNS or donate to help continue the research on WNS. One of the easiest things you can do is teach your friends and family about the importance of bats."

To learn more about bats and bat conservation go to batconservation.org. If you're more of an adventurous type then you can see bats live and up close at the Bat Zone at Cranbrook Institute of Science in Bloomfield Hills. So now that you know the facts tell your friends! Let's get rid of the fear of bats and help conserve one of nature's most vital creatures.

Carissa Hutchinson is a senior at Ferris State University studying television and digital media production. She's currently on two internships with CBS 62/CW50 Detroit and M-1 Studios in Ferndale. While attending college she was a very active member of Delta Zeta and the Media Communications Association. Take a look at Carissa's work at carissanhutchinson.wordpress.com.