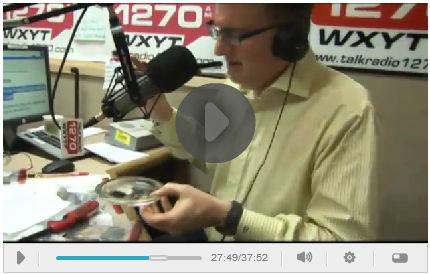 "It's legalized to a certain extent and we need to do something, we need to build this army of people, kids parents, adults, judges, anyone who has contact with anyone in businesses to stop selling it, that's the best way to get it off the market," Debbrecht said.

Williams said he was addicted to the drugs known alternately as spice, K-2, and synthetic marijuana. Williams said after two years of use he still feels strange heart palpitations sometimes.

"I've seen kids basically go into seizures from it, I had a friend die last weekend from it, it's just so powerful and we really don't know the extent of what it really can do to us," Wilson said. "It's something out there, it needs to be stopped.

Williams was joined in a K-2 roundtable discussion on Charlie Langton's Talk Radio 1270 morning show with his father Jim Williams, an attorney, plus the judge, and an undercover police officer. The drugs are in the spotlight as state and local officials consider banning it in the wake of crimes allegedly tied to it.

Most famously, Tucker Cipriano, 19, and Mitchell Young, 20, were allegedly on spice in April when they're accused of beating Tucker's father to death with a baseball bat, and critically injuring his brother and mother.

"About a year ago, I read about how it causes for two or three months then, angry, aggressive, hostile trigger switch behavior that's uncontrolled, that's brain damage," Jim Williams said.

The undercover officer, who remained anonymous, brought 10 or 12 samples of the drug bought at party stores and gas stations in central Oakland County.

"None of it is currently illegal," the officer said, later adding "every one of those samples will get you high."

Versions of the drug sell at $5 for two grams or 4 grams for $10 at party stores and gas stations across metro Detroit.

Cliff Williams said he was an everyday pot smoker as a senior in high school, and started experimenting with K-2 because it was "a lot cheaper."

"Us kids ... We dont' really care as much what happens to us, we feel invincible almost," Cliff Williams said, later adding, "I was smoking it every day, between two and four grams a day."

A version known as "funky green stuff" is the most common synthetic drug she sees, Debbrecht said.

Williams described what it's like to smoke spice, saying "I got noticeably dumber, my heart started beating extremely fast ... You have to sit down, you've got to really think about what's going on ... You can feel like your brain's bleeding almost."

Langton asked: So, where does the fun come in?

"Because you're getting high, it's addictive," Williams said, adding that the short-acting high lasts about 20 minutes before you start to feel "really tired and hungry." He added users feel "really on edge" after coming down from the high.