( CBS DETROIT)- A parking lot no more, an area just outside the Detroit Music Hall being transformed to an outdoor amphitheater, just in time for the summer concert series.

After two weeks of set up, crews putting the final touches on a brand new space right in the heart of downtown Detroit on Friday.

"It's like the Joni Mitchell song in reverse, we took a parking lot and turned it into a garden," said Vince Paul, president and artistic director of the Music Hall Center. 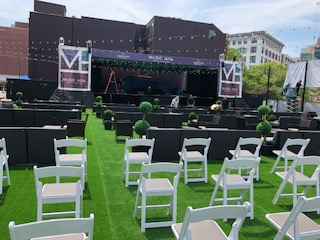 Paul says the idea to transform their parking lot into a beautiful entertainment space, first came about due to the pandemic.

"We really wanted to bring color and vibrancy to the city, but also it was a response to Covid, we're like ok let's move our programs outdoors for a little while," Paul said.

That little while will be the entire summer, Paul not yet reveling the performances that will take place here, but he does say this.

"We booked an entire season of activities both outdoors and certainly indoors our 21-22 season is packed,"

The kick-off of the season starts Friday, May 21 with a celebration of the 50th anniversary of Marvin Gaye's "What's Going On." The event is private and serves as the Music Hall's annual fundraiser. As for the other performances, well, stay tuned.

"It will probably be the most dense Music Hall season we've ever had, like literally hundreds of performances," said Paul