RALEIGH, N.C. (AP) — Detroit trailed Carolina by two goals heading into the third period. Turns out, the Red Wings had the Hurricanes right where they wanted them.
Anthony Mantha scored twice and Frans Nielsen netted the deciding goal in the shootout as the Red Wings erased a two-goal deficit for the third straight game and beat the Hurricanes 4-3 Saturday night.
"That's kind of our sweet spot right now," Detroit coach Jeff Blashill said. "Maybe next game, we'll start down two."
Mantha scored two quick goals at 6:04 and 9:02 of the third period to rally the Red Wings, who have won six of their last seven.
The Hurricanes built a 52-32 advantage in shots, but Detroit goalie Jonathan Bernier made a career-best 49 saves and stopped all three shots he faced in the shootout.
"He just played amazing tonight," Mantha said of Bernier. "All the credit goes to him. He made huge saves in key moments."
Nielsen beat Carolina goalie Scott Darling in the shootout for the Red Wings, who have won 17 of their last 19 games that have gone to a shootout.
After winning only once in their first 10 games, the Red Wings have been resilient. They beat the New York Rangers after falling behind 2-0 in third period and trailed Vancouver 2-0 on Tuesday.
"We just need to figure out a way to play 60 minutes now," Mantha said. "Make it a tad easier on ourselves."
Brock McGinn, Micheal Ferland and Dougie Hamilton scored for the Hurricanes, who have won once in their last seven games.
Sebastian Aho and Teuvo Teravainen led the Hurricanes with two assists each.
The Hurricanes got two acrobatic saves from Darling in overtime but failed to capitalize on a power play in the final 15 seconds of OT.
It was not the way the Hurricanes coach Rod Brind'Amour wanted to start a six-game homestand, especially after taking the 3-1 lead into the third period.
"To me, it was just the third period," Brind'Amour said. "We took our foot off the gas and it cost us."
Mantha was Carolina's biggest problem in the third. On the tying goal, he got out in transition but Carolina defenseman Brett Pesce blocked his first shot. The puck bounced right back to Mantha, who scored on his next shot. 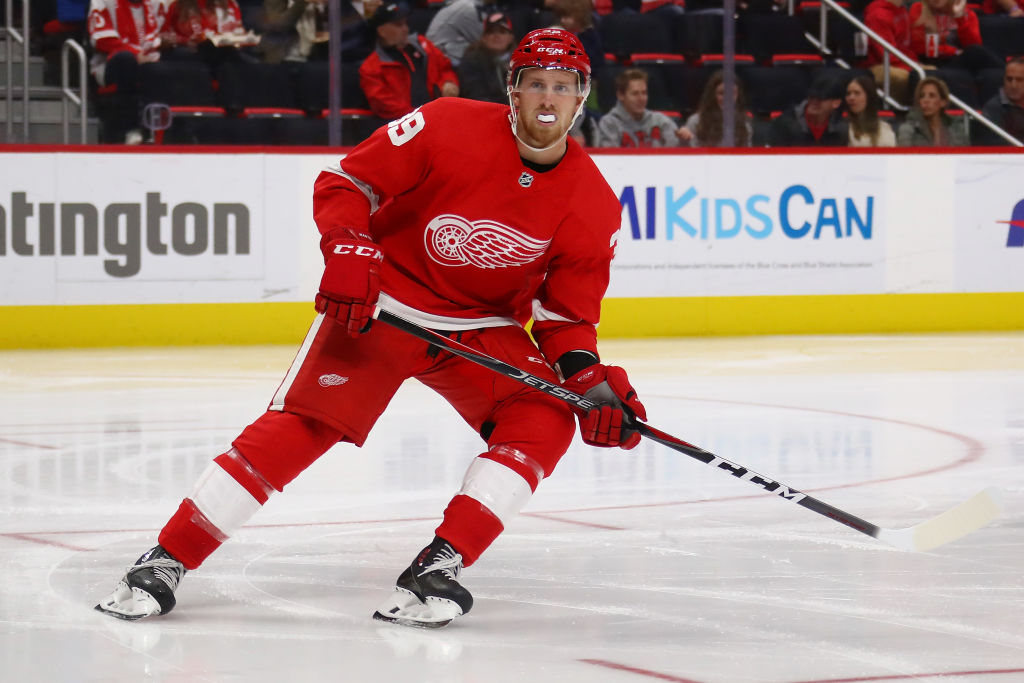 Mantha, who entered the game with a team-worst minus-13 rating, scored for the first time since Oct. 30.
"Obviously, it wasn't going my way these last couple of games and managed to put two in the back of the net today, so that feels good for confidence," Mantha said.
Mantha took care of the scoring and Bernier did the rest. In his sixth start of the season, the Detroit backup stopped 17 shots in the second period, when Blashill thought his team was out-played.
Bernier made a difficult save on Andrei Svechnikov at 13:09 in the second period to keep Carolina's lead at 2-1.
"He allowed us to stay in the game when we weren't good enough," Blashill said. There were times in the second period when we were bad."
After falling behind 1-0, the Hurricanes scored three straight goals. Bernier stopped an odd-angle chance from Aho but the puck bounced free to Hamilton, who swatted in the rebound with a backhand for the 3-1 advantage at 17:01 in the second period.
The Hurricanes have been slumping since a 4-0-1 start to the season. Meanwhile, the Red Wings have found a way to rally after a 1-7-2 start.
"Obviously, we had a tough start to the year, but I think things are falling into place right now," Mantha said.
NOTES: Nielsen has made 50 percent (49 of 98) of his career shootout attempts. He holds the NHL shootout record for goals and shootout-deciding goals (23). ... Brock McGinn, Jaccob Slavin and Aho failed to score in the shootout for Carolina. Detroit's Dylan Larkin was also stopped. ... Andreas Athanasiou's first-period goal was his sixth in eight games for Detroit.
UP NEXT
Red Wings: Return home to face the Arizona Coyotes on Tuesday.
Hurricanes: Host the Chicago Blackhawks on Monday.
© 2018 Associated Press. All Rights Reserved. This material may not be published, broadcast, rewritten, or redistributed.CBS62