Zander Michigan has crafted a sound - and a look - so polished, it's hard to believe he's only been performing under this moniker for three years.

Coming up next for ZM is the release of his newest LP, Zander, MI 48018, on Saturday, November 26th at the Loving Touch in Ferndale. In advance of the new album, CBS 62's Detroit Proud sat down with Zander himself to talk musical stylings, being an artist in Detroit, and...beauty pageants? You'll just have to read on and see.

[OH, AND DON'T MISS AN EXCLUSIVE SONG PREMIERE AT THE END!]

Tell us a little about yourself! How did you get involved in music?

I was born and raised in metro Detroit and currently live in Clawson. My music history is long and varied, but it all started with the Beatles. When I was five or six, I wanted to be in a band just like them. Then I went on to join the school band as a drummer, eventually taking guitar lessons, and playing in local groups around town.

And then someone turned me onto Bob Dylan and I said that's what I gotta do. So I did it. And three years later I'm working at it and still going. I still listen to just about anything and everything, and sometimes the most random song or genre will give me inspiration. For example, my song "Box of Angels" was modeled after the Black Keys' song "Little Black Submarines". Fun fact!

Describe your musical style (and by that, we mean the style of the music – and your fashion while playing the music. ZM definitely has some signature pieces to his look!)

I guess you could call my music folk, Americana, singer-songwriter, blues, or whatever you want. It's really up to whoever is listening. It doesn't matter what you call me, as long as you like me. Ha! I get a lot of inspiration from Dylan obviously, but like I said before, I get inspiration from so many different places that I never feel one-sided or bored. I listen to a lot of hip hop because I love rhythms and I love playing with words, two huge aspects of that genre. It's also something I don't think I could ever do so I respect that! I've definitely gotten some inspiration from the Beatles, the Strokes, Drake, Kendrick Lamar, Damien Rice, Justin Vernon, Kanye West, The Lumineers, all over the place!

As for my style…that started in college. I used to look like a total bro, it was awful. Then I started shopping at thrift stores and looking at things a little differently. Then I started reading GQ and Esquire [laughs] and then I saw Great Gatsby. I had to have one of those straw hats, so I got one. And then I realized that the hokey meter started ticking a bit, so I switched it up with the fedora (thank you, Jack White, for inspiring that). The bow tie was probably Gatsby-inspired too. Maybe James Bond. I'm a huge James Bond fan. Michigan…Zander Michigan.

Talk to us about your new album, Zander, MI 48018! Where was it recorded – and how did you come up with the title?

Zander, MI 48018 was recorded at Studio A in Dearborn Heights. Aretha records all her stuff there so I figured I would show some R-E-S-P-E-C-T and do my best work! They were great to work with and so easygoing. The total recording, mixing, mastering process only took me five days. Freaky fast like Jimmy John's!

The title came from a really stupid movie I saw on the plane to London last year called Paper Towns. It was the worst movie ever; I wouldn't recommend it. But the concept stuck with me about these "paper towns". They are, apparently, fake cities that cartographers put on maps they create to prevent copyright infringement. Since my name "Zander Michigan" sounds like a city/state, I figured why not make a fictional city called "Zander, MI"? So I looked up the Michigan zip code directory and found that 48018 was not in use (18 is my favorite number) and it just so happens to be one up from Clawson (48017).

It all worked out just perfectly, if I do say so myself. It's loosely about small town living and has this kind of eerie abandoned feel of love and loss to it, but I didn't go too far down the "concept album" rabbit hole. My buddy Al and I went down to Detroit to do some spooky abandoned shots that you can see on the final version of the album artwork. I think the whole package works well. 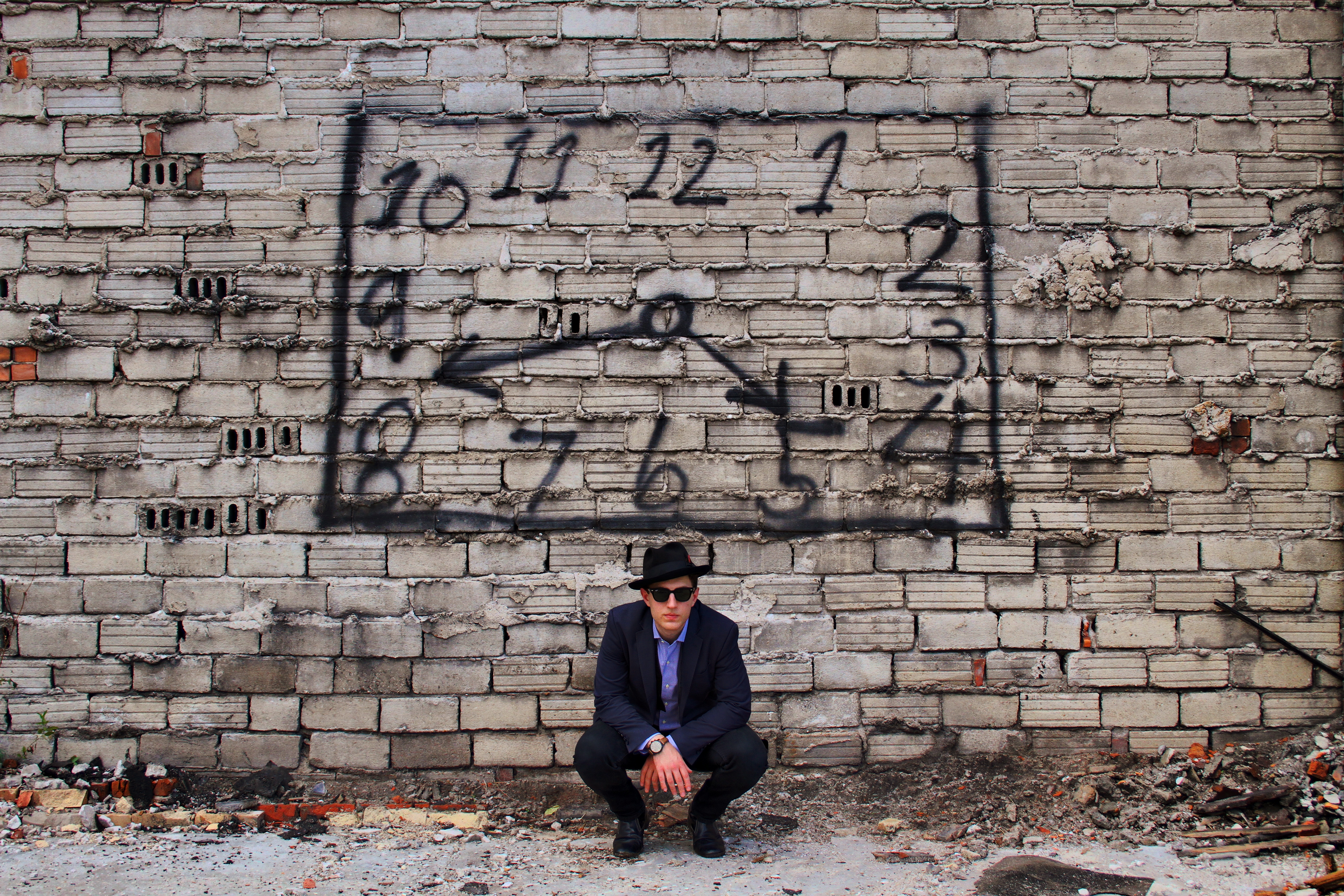 Tell us about the release party! We hear you have a charity partner – and some extra special guests!

I really just hope people show up [laughs]. But it's going to be an amazing show, we have so much going on. Firstly, I'll be performing with a four-piece band which is wicked awesome. We're going to have Anthony Retka's Big Parade open, then the Messenger Birds, then the Gasoline Gypsies, and then my band, featuring me on slide whistle for only one song. KIDDING.

Such a good line up! And yeah, we have a charity partner called Bark Nation. They are puppy-saving superheroes that work in dog foster care, fixing up kennels, and all around awesomeness. They were recommended to me by a good friend and I'm so excited that a percentage of the money for the night will go to them. They'll also have a booth with information. Also, Cave Radio will be on-site, live-streaming the entire show for those that can't be there. We'll be hopefully doing interviews between sets so people on the air can really get involved in what's going on. And lastly, my good friend is releasing his first book of poetry that he'll have available, and he and I are going to do a special little tribute to his father that passed this year from cancer. So much going on, it's hard to keep track, but I'm excited (please come). Did I mention it's on November 26th at the Loving Touch?

How did you come up with your stage moniker, Zander Michigan?

I was in a beauty pageant when I was younger called the "Little Mr. Michigan" pageant (thanks a lot, Mom). I thought I could take that and make it my name, you know? Mr. Michigan has a nice ring to it.

Favorite performance of 2016 so far and why?

My favorite performance was definitely the Ann Arbor Summer Festival and playing with my little buddy Jaxon. Did you see the video? We played [my song] "Folsom Prison Blues" together. WATCH IT ON YOUTUBE. That right there is what music is all about for me, making connections with people.

Most unusual Detroit-area performance of yours?

I played in the back of a moving van once for a friend of mine. Does that count?

What do you like to do in the city when you're not performing?

I love going to other people's shows when I can. My collection of local music is decently respectable right now. I honestly don't have much other time than working and promoting/working on my music. Whenever I get a chance to chill, I don't know what to do with myself. Sometimes I do find myself binging on NCIS though.

Excellent choice, Mr. Michigan.
Is there a Detroit legend that has been an inspiration for you in your music?

Jack White is one of my biggest influences. Mostly for his attitude.

Rock'n'Rye all the way, baby!

Sanders or Better Made?

What makes you proud being a musician in Detroit?

The look on people's faces when you tell them you're from Detroit.

If you had to sum up the city of Detroit in one word, what would it be?

What's next for ZM after the album release?

You didn't hear this from me, but a little birdie told me that Zander Michigan is going back to England next summer for a few festival spots.

You've been performing as ZM for a few years now - has your perception of Detroit changed at all since you started performing here?

Yeah, I used to never be involved in anything around here. In high school, I stuck close to home, and then I went to college and learned Ann Arbor really well. I never really got out and about in Detroit. Once I started meeting people and moving around a bit, I realized there is so much to see and do and be a part of in Detroit. Music is the reason I do most things in my life, it sort of dictates where I go.

Music led me to realize the beauty Detroit has to offer.

Anything else you want to add?

Thanks so much to Zander Michigan for chatting with us.
And now, ladies and gentlemen, what you've all been waiting for...

An exclusive listen to "Say You Loved Me," premiering fresh off of Zander, MI 48018!