He received 14 of the possible 30 first place votes, Porcello had 8. Two voters left Verlander off their ballot completely according to MLB Network.

Verlander's fiancee was not a fan of her man being left off of some of the writers ballots and decided to voice her opinion via her Twitter account using some NSFW language.

"Hey @MLB I thought I was the only person allowed to f--- @JustinVerlander ?! What 2 writers didn't have him on their ballot?" 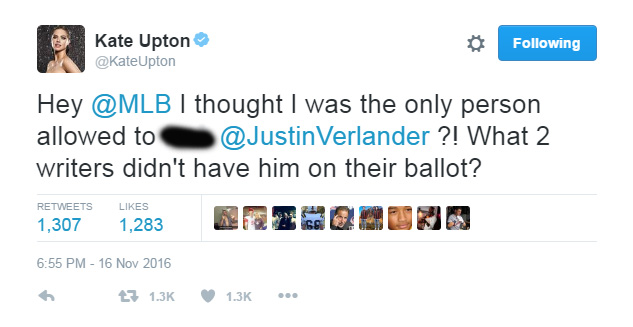 Verlander's brother Ben also voiced his opinion saying, "Are you kidding me? Most first place votes and doesn't win? #SaltyYoungerBrother Explain this.."

Verlander eventually fell points short of Porcello -- and tweeted out a thank you to the writers who did vote for him.