So Thanksgiving has come and gone, December is here, and the holiday season has *officially* started. What better way to get into the holiday spirit than to donate to a good cause? And -BONUS - hear live music from some of the BEST indie bands in the area?

"buildOn emphasizes that one person can truly change the world, and we encourage anyone who is inspired by our mission to check out the organization to get involved and make a difference." Those are the words of Vishwas Tiwari, a member of Wayne State University's buildOn chapter. buildOn is a program that works to break the cycle of poverty, illiteracy, and low expectations through community service and education. They work with multiple universities around the country to help those in need.

How can you get involved? On December 5th, local buildOn student members are partnering up with local musicians to put on an Indie(PEN)dence Benefit Concert to benefit our global community. It's sure to be a night filled with some of the most talented local indie bands, rocking out to raise money for a great goal. All ticket sales and donations at the concert will go directly to buildOn to aid in their goal of constructing schools in a less developed country.

We mean, really, is there a better way to warm up this holiday season than to rock out with local music and help those in need? 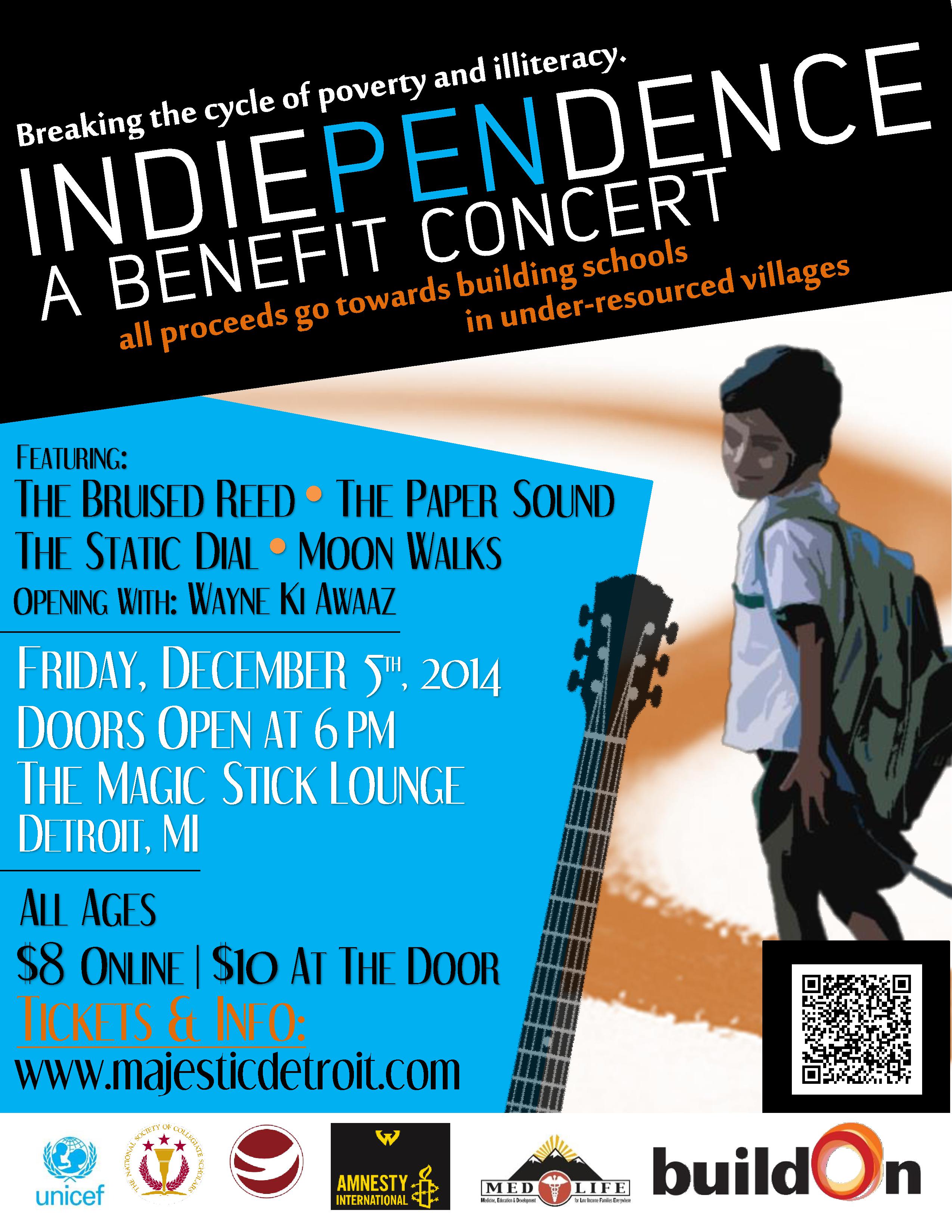 We spoke more with Vishwas, one of the main organizers for the concert, to get the inside details on how they've put this together and what to expect…and of course, all about the music!

Tell us about the Indie(PEN)dence benefit concert…

The Indie(PEN)dence benefit concert is, as we're hoping, a great way to bring Detroit together to enjoy some of our most talented local indie bands, while at the same time, benefiting a global community.

How did this idea come in to play?

The idea was brought up last summer, when another member of buildOn and I were asking businesses in Troy if they'd be able to donate money towards construction costs for a school we were building in Jinotega, Nicaragua this past August. We gave out our contact information to several businesses, and to our surprise, the owner of one of the businesses we visited called us back and offered to do something much more. His name is Bill Gerazounis (the lead singer of Detroit band, The Static Dial) and he told us he'd been wanting to perform for a charity event for some time, and offered to help us put together a concert. He told us that all the money we raised from ticket sales could be put towards our cause (building a school in an under-resourced village in a developing country). Bill was able to get a few more bands to be a part of the concert. We're really thankful for everything that he's done for us! Even though it took a little while to plan everything out (the venue, date, etc.), we were able to put something together with everyone's help (buildOn's members and all the bands' members).

Are you working with anyone?

Primarily, this concert was put together by the members of Wayne State University's buildOn chapter and the bands participating in the event. However, we've also reached out to other student organizations across Wayne State's campus in order to help spread the word. These organizations include: GlobeMed, Amnesty International, National Society of Collegiate Scholars, Unicef, and Medlife. Although all ticket proceeds will go towards buildOn's goal, these student organizations have been kind enough to help us with our efforts.  Lastly, we've also had a lot of help from the people working at the Majestic Theater, who gave us a discount on the venue (considering that we are a non-profit organization) and have shown their support throughout the whole process.

Tell us more about who this concert will benefit...

By raising money from this concert, we seek to do exactly that: the proceeds will go towards the construction costs of a school in a developing partner village (in either Nicaragua or Haiti).  In a lot of these villages, there are children, parents, and grandparents who have never received the chance to be educated. You'll find them signing their name with a fingerprint because they've never learned how to write. Without an education, it's not easy finding a job that can comfortably provide for one's family or be able to live in an area where it's easy to send your children to school. Generations of families continue living in poverty (without electricity, in wooden-hut homes and with a scarcity of food) unless an outside force such as buildOn steps in and works hand-in-hand with the villagers to (literally) dig a way out of this self-perpetuating cycle. The school will benefit all the families, present and future, of our partner village. However, it's not just the village itself that will benefit; everyone who helps with our goal will be helping create a strong global community, something that we all can feel proud of.

What are your goals?

Each year, our chapter has to fundraise a total of $8,000 (which can be very difficult sometimes) - our goal for this event is to raise at least $1,000. All the money from the ticket sales will go towards our fundraising efforts, and we're hoping to set up a donation booth during the event for anyone that wants to help out a little more. But it's not just about raising money. The lack of education is a global problem that affects hundreds of communities, and we want to everyone to know that by working together we can be one step further in solving this problem. We're considering getting the contact information (name & email) of anyone that's interested in our cause so that they can have an opportunity to get more involved. Lastly, one of our biggest goals is for everyone have fun! Listening to great music performed by amazing musicians and meeting new people is one of the best ways to do it!

Will this be an annual event?

This is the first time we've put together an event like this, so we're not completely sure. Bill has offered to do another event like this next year, and to even do it annually. We're considering doing it annually, but we want to see how everything turns out this year. I think it'd be great if we could get something like that going!

Okay, okay, the best part: Tell us about the MUSIC!

There are five awesome groups playing for this event! Their Facebook pages have some great descriptions about the kind of styles they each have and who each band's members are:

- Wayne ki Awaaz, which means 'Voice of Wayne', is a premier South Asian a cappella group of Wayne State University. This group was founded in 2011 by a couple of students willing to show their love of music and culture. Wayne ki Awaaz looks to create a fusion of both Eastern and Western music without instruments. This Friday, they'll be performing some alternative rock pieces.

- The Bruised Reed is a female-fronted indie rock/pop band led by husband and wife team Josh and Kirsten Wheeler. The music leans fuzzy and ragged when it wants to, but contemplative and slowcore when it needs to. Their music has been picked up for local radio airplay on several stations, written about in local blogs, and they even have a song featured in a Chevrolet commercial.

- Moonwalks: Jake, Kate, Tyler, and Kerrigan create the fresh and fascinating sounds of this mellow indie rock group. After their first release "Sheik", they recently released their first EP titled "EP 1" this past November.

What about tickets? How can we purchase them?

Tickets are $10 each, and the easiest way to get them is to buy them at the door! We've also included a 20% ($2 off) discount for all Wayne State students who buy tickets at the door. Doors open at 6 PM. The concert is all ages, so we're trying to encourage everyone to come!

Our organization is unique in that you actually see where your donations and efforts are going. When our members travel to our partner villages to work hand-in-hand with the villagers to bring education and literacy to children, parents, and grandparents in their communities, it is an incredibly humbling and eye-opening experience, as well as extremely rewarding to be a part of.

If you would like some more background information or to get a better feel for what we do in Detroit and abroad, you can visit our chapter's Facebook page, the official international website. We are all very excited about the concert, and hope everyone can make it out this Friday to have a blast!

The Indie(PEN)dence Benefit Concert takes place this Friday, December 5th, at 6pm at the Magic Stick in Detroit. Tickets are $10 and can be purchased at the door – for more information on the concert, visit the Facebook event page here!