FLAT ROCK (WWJ) - A church in Flat Rock burned to the ground Thursday after an early morning fire.

Firefighters battled flames at New Hope Lutheran Church, but it the building on Leonard Road, just off of Telegraph, is a total loss.

Larry Rockensuess, Vice Chairman at the church, said a member called him around 8 a.m. Thursday saying the building was on fire.

"The entire roof is gone but the walls are still up. It looks like, oh my goodness, what a mess. It's definitely a total loss," said Rockensuess.

Pastor Frank Martin said he thinks everything inside the building was ruined, including photographs, books and musical instruments.

"The heat inside, even if something didn't burn, the heat melts so much, I'm not counting on seeing very much inside that we're going to be able to use," said Martin.

The Pastor said luckily, the church had a digital backup of their computers, so most records will make it out unscathed. He said the church also has insurance.

Despite the loss, Rockensuess said the church community will remain strong.

"God is still going to prevail in this and we'll come out better for it. This is just one of those blessings in disguise," Rockensuess said.

Rockensuess said the congregation bought the building about five years ago from Jehovah's Witnesses. It has about 200 members.

Fire officials said that it's not yet clear what caused the fire. There were no reports of injuries.

The church has almost 200 members. This Sunday's services will be held at the Flat Rock City Council chambers. 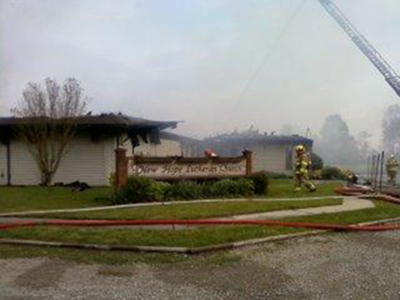