Apple pie and fall go hand and hand. If you're looking for the best places to find this tasty treat in Detroit, look no further.

Grand Traverse has many locations across Michigan, but its Metro Detroit locations include Ann Arbor and the Troy location listed here. You won't find "plain 'ole apple pie here" - GTPie has eight different flavors, ranging from Peninsula Apple Crumb to ABC/ABC Crumb (Michigan apples, blueberries and cherries), so there's a variety from which to choose. The apple pies are all made with Northern Michigan Spy Apples, which Grand Traverse refers to as "the undisputed best." Grand Traverse also offers WiFi and a cozy environment in which to enjoy a piece of pie.

Related: Best Places to Get Alternative Wedding Cakes in Detroit

Apple Annie's is another great place to go if you want to be able to choose between your apple pies. It has apple, caramel apple and Dutch apple, and it also offers a no-sugar apple pie for those who can't eat sugar or who are watching their weight. The restaurant serves everything from burgers to salads, and you can order dessert while dining in or as take-out from the bakery. You can also purchase an entire pie or just a slice, but the restaurant recommends ordering ahead of time if it's for a special occasion.

Pinwheel Bakery is known for its baked goods, and it has pies as well as "galletes," individual pies, for sale. Its apple pie has been described as untraditional, but delicious: a crust with spiced apples and then another topping, like an additional crust. The bakery also makes pumpkin, apple crumb and pecan pie around Thanksgiving time. Pinwheel Bakery shares its business space with the Red Hook Cafe, and it opened in 2007.

It may sound a little strange to say that the best apple pie can be found at a cheesecake store, but if you're looking for a cheesecake/pie hybrid, Peteet's is the place to go. Its apple crumb cheesecake contains apple filling, its original cheesecake and a crumb topping, and is baked on Peteet's graham cracker crust - so it's part pie, part cheesecake. Peteet's has a big variety of cheesecakes as well as baked goods like brownies and cookies for sale, and even cheesecake ice cream. Check the store out if you're in the mood for something a bit more exotic than "plain" apple pie.

Achatz bakes 65 types of pies and has about 30 on hand at any given time. It has eight locations in Michigan; its metro locations are Beverly Hills, Ann Arbor, Troy, Shelby Township and Sterling Heights. Area grocery stores such as Plum Market carry its pies, as well. Choose from apple caramel nut, apple cheesecake pie, apple double crust or Dutch apple, all of which are available for in-store pickup. Its Michigan four-berry double crust, while not containing apple, is one of its "best sellers" and contains blackberries, blueberries, Michigan tart cherries and raspberries baked under a pastry crust. Achatz also sells soup made from scratch, which you can buy in a quart, pint or cup size and hot (in-store) or frozen to take home. 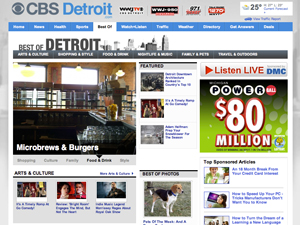 Liz Parker is a freelance writer and a University of Michigan graduate with a degree in Creative Writing and Literature. Her work can be found at Examiner.com and yesnofilms.com.