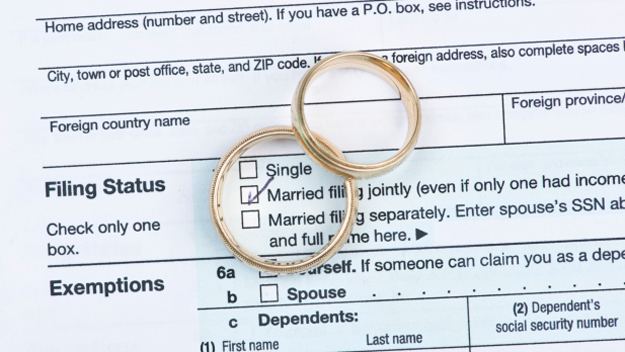 April 15th is just around the corner, which means households across America are gathering documents, figuring out filing statuses and flocking to their local accountant’s office. Every year the rules change, so it’s just as important as ever to stay up to speed on the new regulations and changes. You may be missing out on important deductions, or even worse, raising a red flag that may land you squarely in the audit pile. To make matters even more complicated, if you were married during 2014, there are even more things to consider. As always, check with your accountant before finalizing any tax forms, but here are some helpful tips from the IRS for all those newlyweds out there.

If you were married at any time during 2014, including as late as December 31, 2014, then you are considered married for the entire tax year. However, how you approach your taxes may vary depending on your situation. You may want to file as jointly or separately, and that can mean a big difference in terms of how much you end up paying. According to the IRS website, “You may want to figure out the tax both ways to determine which filing status results in the lowest tax. In most cases, it’s beneficial to file jointly.”

Now that you’re married, your combined income has probably changed. If both you and your spouse work, then you’ll want to take a look to see how that combined income now changes your tax bracket. You can visit the IRS website to take a look at the Withholding Calculator, which will help you see just how much things have changed. You’ll still be married, but you can then decide to file jointly or separately.

Now that same-sex marriage is legal in many more states, you may also need to figure out the tax implications of marriage in your state. For Federal Tax purposes, the IRS recognizes the marriage of a same-sex spouse, as long as that marriage was entered into in a state that recognizes the marriage, regardless of where you are currently living. So if you went to a different state to get married, then returned home, and same-sex marriage is not recognized at home, you will still file as married.

Same-sex couples also have a lot to figure out in regards to their children, and who can claim whom on their tax forms. Basically, the rule is the same for all couples, in that either parent, but not both, may claim a child as a dependent. If you have married into a family and adopted children, there is even more to figure out, like the adoption credit, which helps with the adoption expenses that occur during the process of adopting a child. It’s important to note that adoptive parents may not claim the adoption credit if that child is the child of the tax payer’s spouse.

Deborah Flomberg is a theater professional, freelance writer and Denver native. Her work can be found at Examiner.com.