Every year, the FBI releases the Uniform Crime Report, their statistical interpretation of crime in America. Depending on data given to them by local law enforcement agencies, it's not a ranking of America's cities -- there are no winners, no losers -- but a way for America as a whole and individual cities to track their crime over long periods of time.

With this in mind, I took the FBI's information and looked at the cities with the most violent crime -- murder, rape, robbery and aggravated assault. I did not do this so we could come together and crown a "murder capital" or determine who truly is the "worst." My intention is to share what is essentially a sliver of information about our cities, a handful of numbers that contribute to a much bigger picture.

Ultimately, these rates should be taken with a grain of salt. Alone, they do not represent our cities.

Below, you'll find the cities with the highest violent crime rates. You can see the information for all 9,346 American cities the FBI reported on here.

The country saw a drop in overall violent crime by 1.6 percent between 2013 and 2014. That includes a 2 percent drop in murders, a 6.7 percent drop in robberies and a .7 percent rise in aggravated assaults across America.

There are 76 cities with more than 250,000 people in the FBI's Uniform Crime Report. 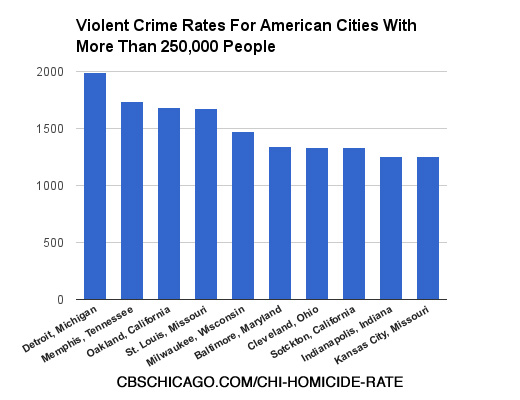 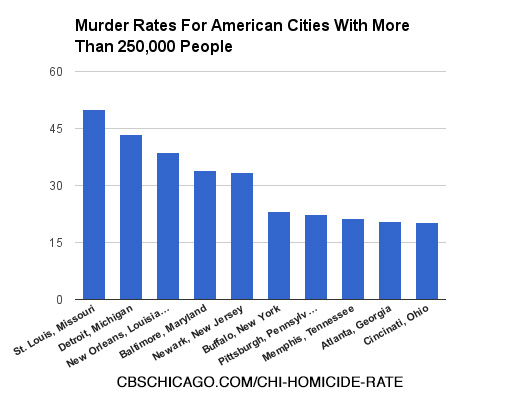 To give more clarity on what these numbers mean, here are the numbers for the individual population groups, as designed by the FBI. Basically, these groups combine all big cities together, all medium cities together, and so on...

I made some very specific choices when presenting the above numbers. Not everyone's going to agree with those decisions.

If you don't, feel free to go straight to the source, the FBI, or to take a look at the spreadsheet I assembled from the FBI's data.

I instead used the violent crime rates per 100,000 people when looking at the numbers of the above cities. Rate per capita takes population into consideration, leveling the playing field between cities with drastically different population numbers. When you look at cities' violent crime rates per 100,000 people, the five cities with the highest totals --New York City, Los Angeles, Chicago, Houston and Philedelphia -- disappear from the top of the list.

They have the biggest numbers, yet, considering their populations, have a lower number of violent crime occurrences than the cities with the highest violent crime rates.

Towns with fewer than 1,000 people are not included in this article. For some of these towns, a single murder would catapult their murder rate into the hundreds, which is pretty drastic.

These towns were left in the spreadsheet with the data though.

As it turns out, collecting accurate data from every law enforcement agency across America is not an easy feat. Many quirks exist within the data collected by the FBI, with the differing definitions of rape being the biggest at the moment.

How much of a difference is there between the definition? Nationally, the older, more narrow definition counted 26,994 rapes in America in 2013. The newer definition counted a total of 38,250. For America as a whole, the new rate counted 41 percent more crimes than the old rate in 2013. With that said, that gap is likely to vary significantly from city to city.

Numbers don't lie, but people often use numbers to support their lies.

The numbers in this article represent a year, sometimes two years, which is a relatively short amount of time. They do not represent the whole picture when it comes to a city's crime, let alone the whole city, or how a city has dealt with its crime over long periods of time. For a better view of a city's crime, you need to study the FBI's statistics going back decades. And even then, the changes in crime won't necessarily reflect all the changes a city goes through over time.

Most of all, any numbers you are able to find won't be able to completely and accurately portray your city. It takes a deep understanding of not only the statistics behind crime and poverty, but a solid grasp on the history of a place to begin to understand the true character of the place you live.

So, you know, please don't make a million "the most dangerous cities in America" lists without providing any context of what those numbers mean or how misleading they can be.