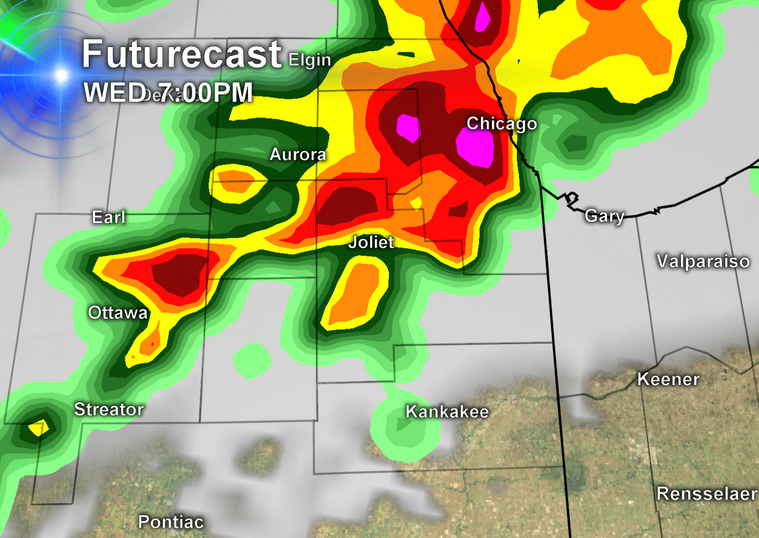 CHICAGO (CBS) -- The National Weather Service was anticipating a major severe weather outbreak in the Chicago area, starting Wednesday afternoon, with the likelihood of very strong storms, large hail, high winds, and a risk of tornadoes.

CBS 2 Meteorologist Megan Glaros reports there is a high risk for severe weather, a rarity for the Chicago area. It's something more common in Tornado Alley in the central part of the country around Oklahoma and Kansas.

Strong storms in counties west of Chicagoland began to fire up around 3:40 p.m. Storms will continue through as late as 10 p.m. The highest chance of the most severe weather will happen around rush hour and continue into the evening.

A Thunderstorm Warning has been issued for the entire Chicago area until 9 p.m. 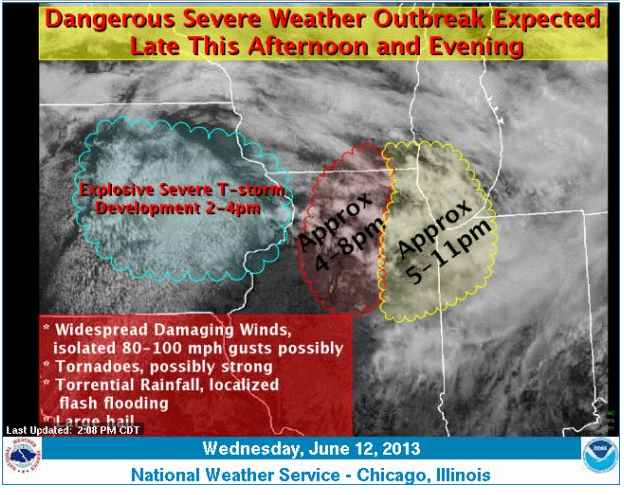 A Tornado Watch has been issued until 9 p.m. for portions of the Chicago area, including DeKalb, Kendall and McHenry counties. Other counties under the watch are farther west and northwest of Chicago. In its alerts, the National Weather Service has labled the forecast "PDS"--Particularly Dangerous Situation.

The NWS is also predicting a 15 percent possibility of tornadoes in the area. A total of 2 to 3 inches of rain could fall by Thursday morning.

The National Weather Service's storm prediction center said the risk for severe weather in Chicago, Indianapolis and Cincinnati on Wednesday is 45 times higher than a normal June day. WBBM Newsradio's Bernie Tafoya reports the agency said there's a risk of dangerous weather on Wednesday and Thursday to 64 million people in 10 states.

Forecaster Brynn Kerr said they should be fast-moving storms. "They could be moving fairly quickly; roughly 30-, 40-plus miles an hour."

High winds from the storm also could be capable of knocking over trees.

The storm system could bring large straight-line wind events to parts of the area, with a potential for supercell storms.

The line of storms also could spawn an unusual weather event called a derecho, which is a massive storm of strong straight-line winds, this one spanning at least 240 miles.

According to the National Weather Service, a derecho is a band of storms with winds of at least 50 knots, or 58 mph along the entire span of the storm front, and maintained for at least six hours.

Derechos happen once or twice a year in the middle part of the country, and can generate winds of 75 mph or more, create large hail, or even spark tornados.