OAK BROOK, Ill. (STMW) -- Police are releasing surveillance images of a burglary at the Oakbrook Center Mall's Louis Vuitton store in hopes of catching nine people who took $120,000 worth of merchandise Sunday after smashing through the front door with a minivan.

Just after 4 a.m., Oak Brook police responded to a burglar alarm at the shopping mall at 100 Oakbrook Center, and found extensive damage to the Louis Vuitton store, police said in a statement.

Investigators found the burglars drove a minivan through the front door. The driver stayed inside the vehicle, while eight other people wearing gloves and masks went through the store. 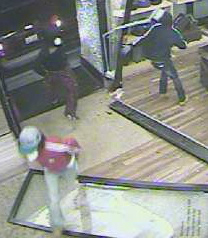 Authorities released this surveillance photo of a robbery Sunday at the Louis Vuitton store at Oakbrook Center Mall. / photo from Oak Brook police

(Source: Sun-Times Media Wire © Chicago Sun-Times 2014. All Rights Reserved. This material may not be published, broadcast, rewritten, or redistributed.)