CHICAGO (CBS) -- For the second year in a row, a La Niña weather pattern has returned to the Northern Hemisphere and this could produce another volatile winter for Chicago.

La Niña occurs when cooler than average water temperatures are recorded near the equator in the eastern Pacific Ocean, west of South America. 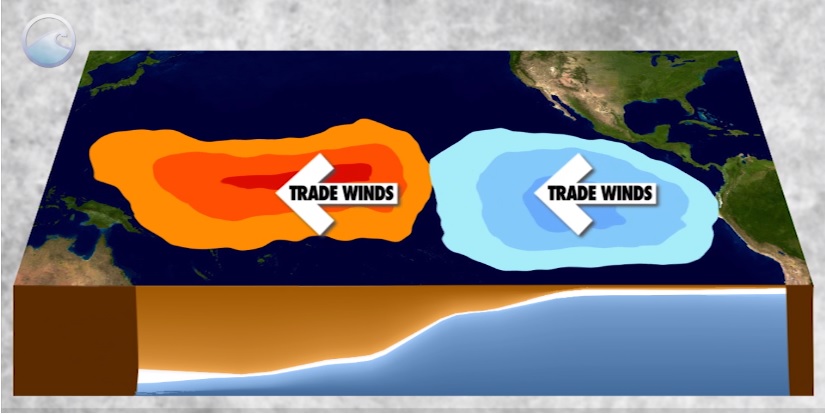 This change in seawater temperature thousands of miles away will produce changes in weather patterns across North America. During a La Niña event, the jet stream is positioned more northward, making for a more extreme weather pattern for parts of the country: From increasing drought conditions in the Southwest, to cold and wet weather in the Pacific Northwest.

On average, La Niña winters in Chicago are wetter than average. The Climate Prediction Center shows above average precipitation in their outlook for December, January, and February.

The Climate Prediction Center predicts that there is an 87 percent chance that a La Niña weather pattern will last through the winter months.

If we use last winter as a guide, there will be periods of both extreme warmth and cold, which would be a classic La Niña setup for Chicago. The most extreme winter weather happened in a period of three weeks from late January to mid-February - that's when 34.1 inches of snow fell at O'Hare International Airport and 41.3 inches near Midway.

Winter last year started off mild and mainly dry, with December 2020 recording above average temperatures and only 5 inches of snow fell at O'Hare.

January 2021 was overall warmer than average - mainly because of a mild first half of the month. By the end of January, temperatures turned sharply colder with heavy periods of snow. Snowfall in January added up to 21.9 inches at O'Hare - the 10th snowiest January on record (since 1885) - and was 10 inches above average for the month.

February was even colder and just as snowy. The average temperature for February was more than seven degrees below average for the month. Snowfall in February added up to 21.6 inches, which was the 9th snowiest February on record (since 1885) and nearly 11 inches above average.

The bottom line - get ready for another volatile winter, with episodes of extreme cold and heavy snow all thanks to La Niña.