NAPERVILLE, Ill. (CBS)-- A cleanup effort is underway in Naperville after a tornado hit the area overnight.

Severe and dangerous thunderstorms brought a tornado to the ground late Sunday night and brought heavy rain and dangerous wind to the entire Chicago area. Monday morning, residents in Naperville woke to extensive damage after a tornado touched down.

The Naperville fire chief said more than 100 homes were damaged. Some had windows blown out, others have holes in their roofs and some lost entire walls.

Many residents will not be allowed back in their home until repairs are made, and some home will have to be demolished.

Annie Shum returned to her home Monday morning with firefighters. It was the first time she had seen it in daylight.

"I cannot stay in that house, not right now," She told CBS 2. 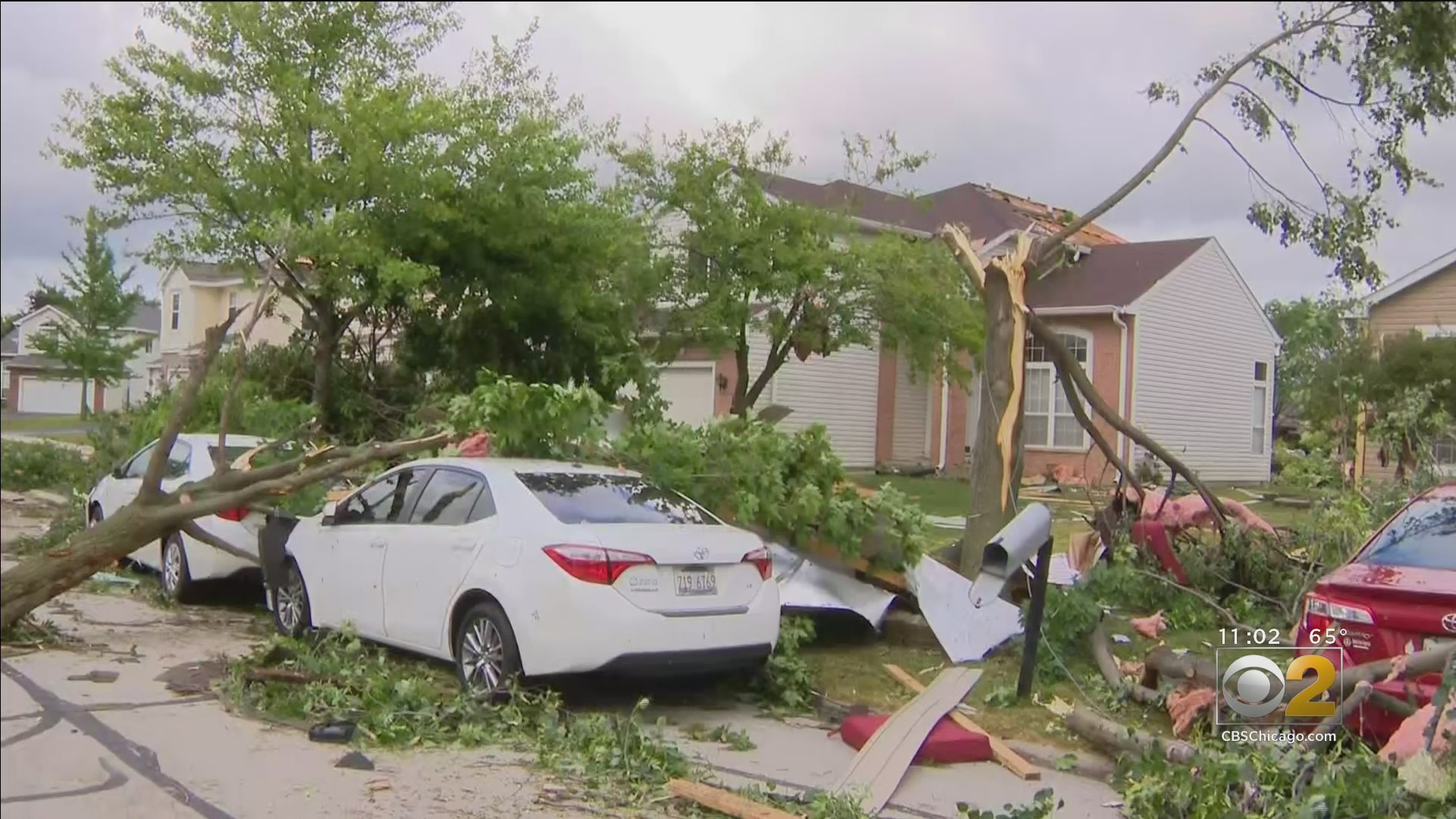 Shum says when the tornado went past her house on Nutmeg Lane, it shook like someone dropped a bomb.

"I was really scared," She said. "It's lucky, I was in the master bedroom, nothing fell down at that time, but then I saw lots of things blowing into my room and so I went to take a look. That window is broken and also the ceiling was broken so I saw the insulation and leaves, leaves from the trees and a lot of the debris."

For safety reasons, firefighters wouldn't let her back inside. It's the same story for several others in her neighborhood.

Sixteen homes have been deemed uninhabitable.

Next door, Rayyan Hyder's home is already boarded up. He said he was in disbelief when he, his mom and sister emerged from their basement last night.

"As soon as I looked in my room, I was like 'oh this is really bad' because there was just glass everywhere, dirt and debris everywhere," He said.

A few blocks over on Princeton Circle, there's utter devastation for one family after their home leveled by the twister.

Two people had to be rescued and one now in critical condition. They're among five who had to be taken to Edward Hospital.

Naperville Mayor Steve Chirico said residents should be aware of scam artists who emerge offering help during times of crisis.

"Be very careful and you are impacted, please contact your insurance company and be cautious of anyone visiting your home, unsolicited," Chirico said.

He said many people have come forward offering donations to help people affected by the tornado. Chirico said anyone one wishing to help can go to the City of Naperville's website where information is posted.

Mark Puknaitis, Chief of the Naperville Fire Department, said while it is a tragic day for Naperville, it could have been much worse.

"When you look at the destruction that occurred over the area, it's amazing that we can stand here and report that we only had eight people that were transported to hospital," Puknaitis said, who added that there were no fatalities.

"We have about 22 homes in this area that are uninhabitable. And there are over 130 homes that were affected, that were damaged in one way or another," Puknaitis said.

He added the most challenging work had to do with going door-to-door to visit residents to make sure everyone was OK and accounted for.

"I will tell you the people in this community came together for each other. They came out supported everybody," Puknaitis said. "In the attitudes and the perseverance of people in this neighborhood. I can't say enough about."

"I know that the governor has been in touch with those local mayors, and they will be dealing with the state aid," Foster said. "I think at this point it looks unlikely that this will qualify as a federal disaster."

The fire chief saying it's a "miracle" no one was killed, something everyone in this neighborhood is grateful for.