"But shootings are up!"

It's annoying that people constantly add this to every single article that decides to use a different statistic, and it's annoying that we (the press) cling to year-to-year changes as if two years can tell our readers everything they need to know.

Two years of one statistic is nothing! We deserve more. Which is why, for the sake of my sanity (and yours too), I looked into twenty years of gun violence statistics in Chicago.

Has gun violence risen in Chicago? 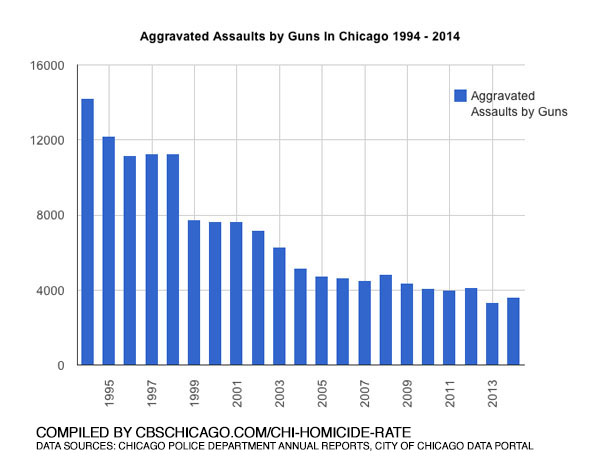 Starting with the cons, the Chicago Police Department has historically recorded aggravated assaults with guns by incident, while the FBI's Uniform Crime Report asks cities to record them by victim, which has led to underreporting. According to a contact at the Mayor's office, the department has started recording aggravated assaults by victim, and have retroactively re-calibrated the numbers for 2012 and 2013.

The reason aggravated assaults are a better statistic to look at than shootings? Prior to McCarthy, the Chicago Police Department didn't track shootings. It's difficult to look at how violence has changed over time when you only have four years to compare. Aggravated assault statistics go back to the 1960s, making it easier to get an idea of how the city has changed over a longer span of time.

What do you find when you compare twenty years of aggravated assaults with handguns and other firearms?

Of course, this comparison is a bit off... 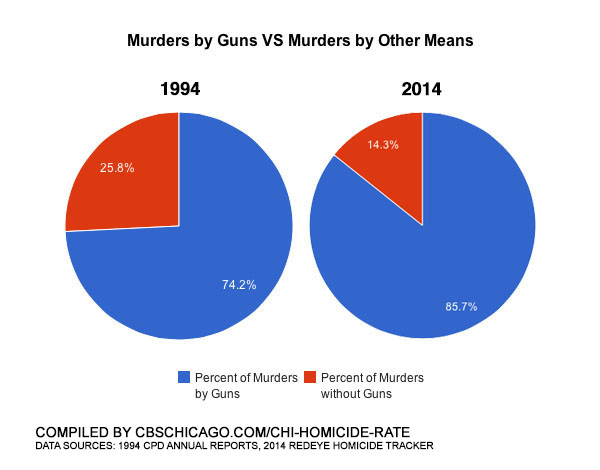 Why are we comparing aggravated assaults with guns to murder totals, since all homicides aren't committed with guns?

Something surprising I didn't see the Chicago Police Department mention at year's end? 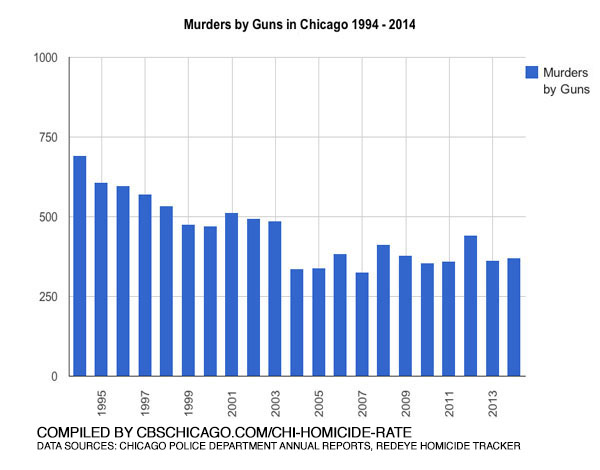 Between 1994 and 2014, murders by guns dropped about 38 percent. With that said, murders by guns numbers have not seen the same consistent progress as total murders and aggravated assaults with guns.

Ultimately, we're left with more than a few questions. While Chicago, like the rest of the country, has been able to significantly lower violence over the past few decades, gun violence persists to drop at a slow rate -- why? The answers are numerous. Medical care advancements, gun laws and socioeconomic changes in Chicago are three issues that many would claim affect gun violence, but do the numbers prove any of these claims?

Honestly? I don't know. I guess I'll have to look it up and let you know next week! Until then, feel free to read my previous articles on Chicago violence here.

Notes: The majority of the research for this article was obtained from the Chicago Police Department's annual reports. Since the reports only go up to 2010, recent numbers had to be obtained from the Chicago Data Portal. Any data not compiled with these sources is noted within the article. It sucks to have to compare data from different sources, so I did my best to avoid that.

In two different CPD annual reports, I found drastically different results for murders by guns for 2001. I went with the one that didn't appear to be an outlier.

2014's homicide totals may change as cases get reclassified.

I contacted the Chicago Police Department for clarification on some of the notes mentioned above, but have yet to receive a response.