The GRAMMYs rounded up some of their favorite artists to wish us all a happy holiday for their very first Christmas special, A Very GRAMMY Christmas.

Grande kicked off A Very GRAMMY Christmas with her new holiday single, "Santa Tell Me." Wearing all-white, Grande's performance of her new single "Santa Tell Me" had her playing the role of head elf, making sure everything is going right in Santa's workshop. But Grande may have been slacking since it seemed like those little helpers of Santa's were doing more dancing than toy-making.

Later, she returned to the stage for her new single "Best Mistake" featuring her boyfriend Big Sean who was doing his best James Bond impression in a nice looking tux.

The two didn't try to hide their love away, standing close, staring into each other's eyes and eventually walking off the stage hand in hand. 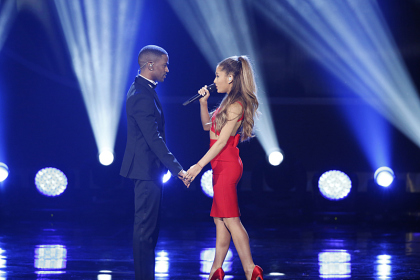 Grande said that she gets "a little giggly" doing that song because it's "such a serious song, and to see him act so seriously makes me laugh."

And what does she want for Christmas? "Maybe some more sleep, that's all she could ask for."

According to Adam Levine, "Jews love Christmas." And he should know, since he is one. His band channeled John Lennon for a soulful take on his classic "Happy Xmas (War Is Over)" and returned later to perform a medley of their 2004 hit, "This Love" and their latest single "Animals."

Tim McGraw's Christmas memory was a life changing one. He explained that while looking through his mom's closet for presents one year he found his birth certificate, which revealed that his last name was not Smith like he had thought, but McGraw. That moment led him to find out that his real dad was not who he thought, but instead was the baseball player Tug McGraw. 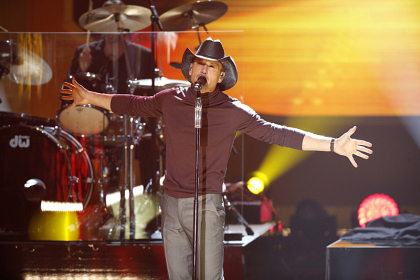 After sharing his moment, McGraw hit the stage for his performance of the 2004 track "Live Like You Were Dying," which won him the GRAMMY in 2005 for Best Male Country Vocal Performance wowing the crowd and earning a standing ovation. He then took us downhome for a performance of "Overrated," but not before sharing that his favorite GRAMMY moment was watching his wife Faith Hill win three GRAMMYs in 2001 for her 1999 album, Breathe.

Pharrell grabbed a few of his GIRLs and his hat for his performance of "Please Come Home For Christmas" getting a little flirty with the ladies for the classic carol. He came back later to show of his dance moves on "Lost Queen" off his latest album GIRL. 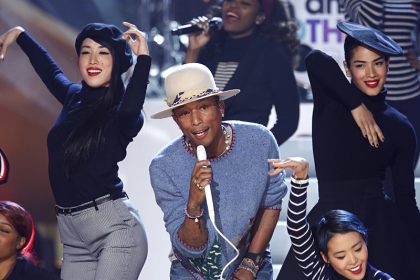 Mary J. Blige's GRAMMY memory was bittersweet. In 2002 she lost the GRAMMY for her album, No More Drama, but instead of getting angry, she got even.

"I took all that anger and passion and rage and all of it, and instead of being negative I turned it into something I needed for my performance." She ended up getting a standing ovation with her powerful take on "No More Drama" and managed to earn another one this night when she performed U2's "One," a song she recorded with the band in 2005. 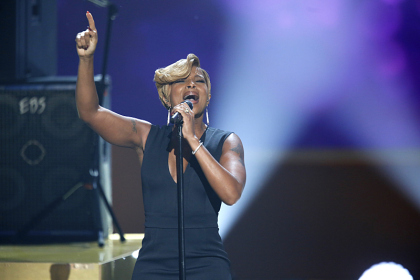 For the show's big finale, Sam Smith went to the top of the Capitol Building for a performance of "Have Yourself A Merry Little Christmas," which was recorded by Frank Sinatra in that same building a few floors down.

Of course, as soon as he started we were in tears. Smith has a way of doing that to people. Smith later released a video of him performing the Christmas classic, but even more exciting, the Brit received the news that he had earned his first Album of the Year nomination.

He'll go up against Beyoncé, Beck, Ed Sheeran and Pharrell when the GRAMMYs go live on Feb 8 on CBS.

Check out the full list of 2015 GRAMMY nominees here.

Read more about the GRAMMYs on Radio.com