Everyone has their favorite plays from Super Bowl history. But what's most fascinating is that for everyone who buzzes about a huge play for weeks afterwards, there's someone who would just as soon use the Eternal Sunshine of the Spotless Mind machine to forget all about it. "Yeah, yeah," they think. "That was a great, amazing, memorable play, blah blah blah. SO WHY DOES IT HURT SO BAD?"

To those fans, these aren't amazing plays – they're brutal punches to the gut. Delivered by Randy Couture, no less. Every time these plays come up on a highlight reel, therapy bills skyrocket. So let's look at the top five greatest moments (or stomach punches) in Super Bowl history.

If you're from New England, David Tyree can rot in Hell. To everyone else, he's a hero, as he directly ended the Patriots' run at a perfect 19-0 season back in 2007. With just about a minute to go, and the Pats up 14-10, Eli Manning threw a 32-yard pass that, according to the laws of physics, should not have worked.

David Tyree initially caught the ball, but Patriot Rodney Harrison knocked it out of his hands. 99.9999999999% of the time, this would result in an easy fumble. Tyree, however, thought lightning-fast, grabbed the ball with one hand and squeezed it against his helmet to secure it. It was a completion. Four plays later, and with just 35 seconds to go, the Giants scored the game-winning touchdown to oust the once-undefeated (and now thoroughly deflated) Patriots.

4. Titans Lose By Less Than One Yard (Super Bowl XXXIV)

No Super Bowl has ever gone to overtime, though this one came super close. Down 23-17 to the St. Louis Rams with seconds to go, the Tennessee Titans had one more shot to win. Titan Kevin Dyson got the ball and ran to the end zone, but was tackled by Ram Mike Jones at the two-yard line.

However, Jones had grabbed Dyson by the legs, so as long as Dyson's shoulder did not touch the ground, the ball was still in play. He reached and reached, as far as he could, because if ANY tiny little bit of the ball crossed the end zone marker, the game would be tied and overtime would become a thing. Unfortunately for him, with less than a yard to go, Jones reached up and rolled Dyson around. This forced his shoulder to hit the ground, which ended both the play and the game.

It wasn't enough to simply win. It wasn't even enough to win with seconds to go. No, for Joe Montana and the San Francisco 49ers, the night would not be complete without a complete stomach punch to everybody in Cincinnati who hoped and prayed that their fair city would finally get a Lombardi Trophy of their very own.

Down 16-13 to the Bengals, the Niners were backed up to their own 8-yard line by a kickoff penalty. They had 92 yards to trek if they wanted to win. They certainly could have hit a field goal and forced overtime, but where's the fun in that? No, instead Montana marched them all the way to the 10-yard line with 34 seconds to go, completing one more pass into the end zone to give his team a shocking 20-16 lead.

The Bengals, with one last chance, succeeded only in reminding everybody that they were, in fact, the Cincinnati Bengals. They failed to score a quickie touchdown, and dropped a Super Bowl that, mere seconds before, they were certain was theirs. 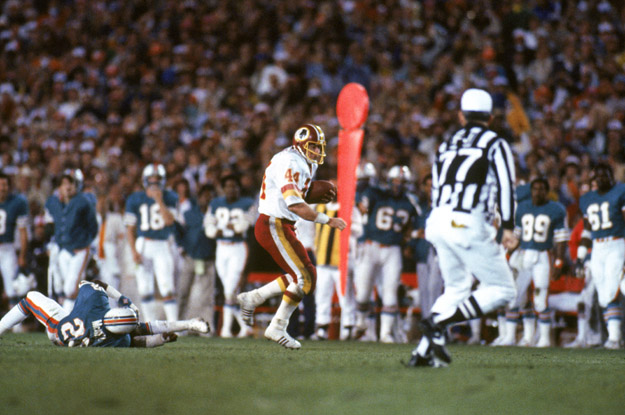 Unlike everything else mentioned thus far, Super Bowl XVII's moment did not occur in the final seconds of the game. Rather, it came with over 10 minutes to play in the final quarter. However, what happened was such a demoralizing blow that there was no earthly way the Miami Dolphins could have ever hoped to recover.

John Riggins and the Washington Redskins were down 17-13, and were facing 4th down with one yard to go. The play called was a simple short run, designed simply to get the first down. The Dolphins probably could have handled that. However, Riggins felt differently, and decided to drive a stake through every fishy heart on the field. He broke free of an intended tackle and ran not one yard, but 43 yards for a touchdown. They were now up 20-17, and Miami never recovered. When you not only fail to stop someone from going one yard, but also fail to keep him out of the end zone half a field away, you've lost all rights to any future amazing comebacks.

A helpful, but ultimately meaningless, Redskins touchdown late in the quarter gave them a 27-17 lead, which ended up being the final score. But for Miami fans, it might as well have been 127-17. In fact, a blowout would likely have hurt far less.

Finally, we have a play that started out as a great moment for one team, but ultimately became one for the other. Chicago Bear Devin Hester received the opening kickoff of Super Bowl XLI; 13 seconds later he had run the entire length of the field for a touchdown. Never had a team scored that quickly in the Super Bowl, and Indianapolis Colts fans were absolutely stunned. Peyton Manning was about to choke again, and he hadn't even taken the field yet!

Fortunately for them (and sadly for Bears fans everywhere), Chicago ultimately ended up being the butt of everyone's jokes. That amazing start was just about the only good thing they did that night, as the Colts immediately hulked up and went on a complete tear, culminating in a 29-17 victory. By squib-kicking almost exclusively for the rest of the game, the Colts completely neutralized Hester, demoralized the Bears and permanently shut down anyone who thought Manning, and by extension the entire team, couldn't win the big one.

As for the embarrassed Bears, they learned a valuable lesson – don't try to finish off your opponent too early. All you'll do is make them mad.

Check out more of our Top 5 Lists.

Jason Iannone is a Cracked Columnist, editor and writer for hire, and a Patriots fan. And yes, the Helmet Catch entry physically pained him to write. Console (or mock) him via Facebook, Twitter, and Tumblr.