BALTIMORE (WJZ) -- The first reference the Baltimore Historical Society could find to "salt boxes" in the Baltimore Sun archives is from 1969. It's still not clear exactly how long the boxes have been a neighborhood fixture during Baltimore winters.

"They're full of salt for residents who are slipping or need some traction in the snow," Baltimore resident Juliet Ames said.

This winter, Ames was inspired to give the boxes a little love.

"They're kind of my little, like, love letter to the city, you know? We get a bad rap, but there's so much cool stuff and so many cool people that came from here," Ames, an artist, said. "I was really afraid to put the first box up because I'm a rule-follower."

In December, Ames, whose Twitter handle @thebrokenplate refers to the type of jewelry and artwork for which she's known, decorated a salt box in Hampden using china.

Ames says she was unsure how the city would react to her addition to the box on Roland and 36th.

"I was really afraid to put the first box up because I'm a rule-follower," Ames said.

But, the City's Department of Transportation, which is responsible for maintaining and filling the salt boxes, approved of the modification.

"In theory, this is graffiti, right? This is defacing public property," Robert Atkinson, who runs @baltimore.saltbox on Instagram said. "There's a bunch of them around and they're just an iconic Baltimore thing."

Since then, Ames has decorated several other salt boxes and inspired a movement of other Baltimore artists to do the same.

Atkinson has long been interested in salt boxes and began plotting them on a map years ago.

"There's a bunch of them around and they're just an iconic Baltimore thing," Atkinson said. "Once you notice them, they're kind of everywhere."

Iconic film director John Waters is honored with a pair of salt boxes, one with his likeness and another with the Divine character from his films.

"The only thing I would give the one artist who did the great famous shot of Divine in the dress with the gun... is put a circle and a line across the gun, because I don't like guns pointed at anybody, especially on Eastern Avenue," Waters said. "I was honored, even though my mother always said, 'Fool's name in fool's places always appear in public places.'"

Elected officials are involved in the art-making, like Councilman Ryan Dorsey and the art-inspiration.

The boxes can be decorated with a 17x23-inch board and a few drywall screws.

A spokesman with the DOT says the department is behind the creativity, so long as artists keep it clean. City officials are even talking about opening it up to a competition.

"Hopefully, we can spread some Baltimore joy," Ames said. "People are getting a ton of joy out of seeing art in the world."

Ames even created a worksheet for kids to design their own salt box. She hopes to incorporate student designs in future "art boxes." 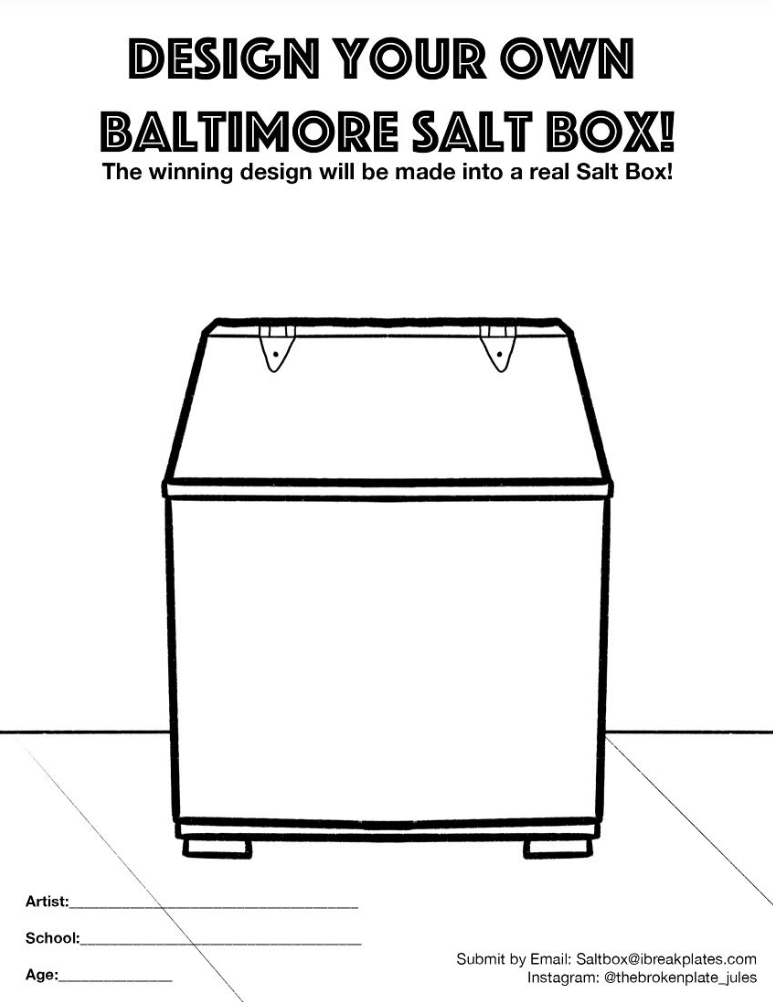 A city inventory this month of the salt boxes revealed there are 775 citywide. Typically, they are collected every spring and re-installed throughout the city each winter. This year, they stayed out year-round because the pandemic affected staffing. When they are put out next winter, officials will use GIS mapping to inform the public of salt box locations.

"I can't wait to see what people do next," Stevenson said.