BALTIMORE (WJZ) -- The Star-Spangled Banner Centennial Monument in Patterson Park has been defaced.

"Racist Anthem" was painted in front of the bronze statue that honors the national anthem. 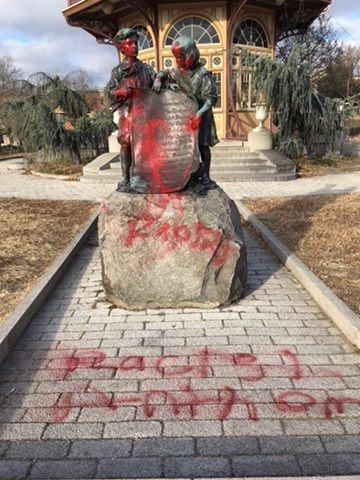 About half a dozen police officers were there Monday afternoon to take pictures of the damage and search the area for evidence.

At this point, they have a can of red spray paint found nearby, but no arrests.

A deep red stain on two bronze children in Patterson Park that were erected to honor the national anthem.

The sculpture depicts two children holding a scroll that reads: "To commemorate the centennial of the writing of the Star-Spangled Banner, the pupils of the public schools of Baltimore have erected this memorial upon Hampstead Hill where in September, 1814, the citizen soldiers of Maryland stood ready to sacrifice their lives in defense of their homes and their country."

"I'm very upset. I've got tears in my eyes, not because it's cold out, but because I'm upset," said Ann-Louise Novak, who lives nearby. "It's not a racial thing. It's a children thing."

Paid for by public school students more than a century ago, the statue became a target of vandals overnight.

It's now marred in splashes of paint and marked with the words, "Racist Anthem."

For Novak, it's not just an attack on Baltimore's history, but her own, as she grew up playing by the monument.

"We were all running around, playing like kids again. We all took a picture around it together," she said.

"Baltimore City Recreation and Parks is aware of the vandalism that took place in Patterson Park. As caretakers of the Park, our Parks Maintenance Division is working diligently with the Commission for Historical and Architectural Preservation (CHAP) to assess the damage. We understand the sensitivity of this matter and will work with City Hall and the Friends of Patterson Park to find a solution to this matter."

While literally hundreds of Baltimore's young people were demonstrating Dr. Martin Luther King's example of service today, marching and making a positive difference in our community, it's unfortunate that others decided it was more appropriate to vandalize the 103-year old children's statue in Patterson Park. We will of course determine the best way to restore the statue and hold those who defaced it accountable.  In the meantime, this isolated incident should in no way detract from the wonderful spirit of generosity that was so evident throughout our City on this very special day honoring Dr. King's enduring legacy.

This isn't the only attack on bronze that is under police investigation.

The statue of Francis Scott Key was cleaned, and still stands in Bolton Hill.

Baltimore City Recreation and Parks says it is still assessing the damage.