BALTIMORE (WJZ) -- After several Baltimore-area private school students became wrapped up in a social media storm over some racially-insensitive photos of Halloween costumes, one student has apologized. 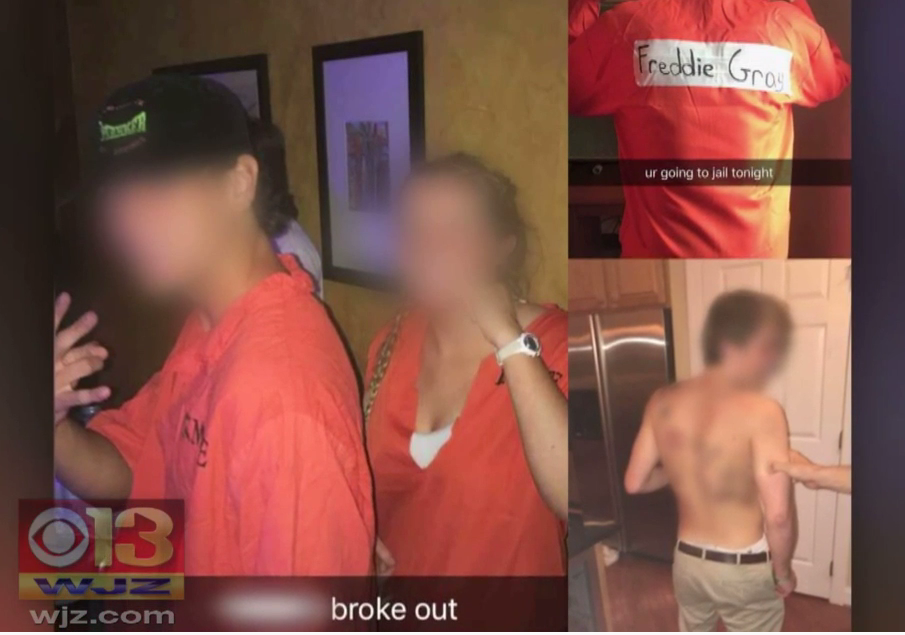 The boy and girl in the photo on the left are juniors at Roland Park Country School and Gilman School. The person in the Freddie Gray jumpsuit is a former Boys' Latin School student. And the boy without a shirt is a student at St. Paul's School.

The person who gathered the photos and posted them on Facebook in an effort to shame the behavior claims one of the original posters of the photos goes to Mount Saint Joseph High School.

The only girl featured in the series of photos has apologized. In a statement obtained by WJZ, she writes:

"I know what I wore was completely inappropriate and I understand everyone's anger towards me but I just wanted to tell you something. I promise on my life that both [redacted name] and I did not write "Freddie grey" on the back of our shirts. I would never do that, that is horrible. When I was dressing in costume I was trying dress like the girl from oitnb [Orange Is The New Black] and I realize now that the way I dressed was completely unacceptable. I'm extremely sorry for what I did and I don't think I'll ever forgive myself. I know this apology is not going to redeem myself at all, but I wanted to tell you that I'm sorry for offending you. I truly did not mean for my costume to be disrespectful but looking back on it I should have realized how messed up my costume was. But I promise I would NEVER write Freddie grey on the back of my shirt. I'm really sorry."

Three of as many as five schools connected to the incident released statements in the wake of the controversy Monday.

"Know that we take any situation involving our students seriously, and this is no exception," representatives from Gilman School and Roland Park Country School wrote in a joint statement. "Please understand that many involved in this situation are minors and we respectfully remind you of this as we work through the details."

The statement from the schools also clarifies the following points:

"St. Paul's School does not tolerate any form of hate or discrimination. The School is investigating an incident that occurred off campus and outside of school hours, and will take the necessary and appropriate steps. Privacy policies do not permit us to provide any further information. We remain committed to fostering an inclusive community whose members respect themselves and one another."

WJZ reached out to Boys' Latin School for a statement, but have yet to hear back.