BALTIMORE (WJZ/AP)- A rifle-wielding attacker opened fire on Republican lawmakers as they practiced for a charity baseball game Wednesday, critically wounding House GOP Whip Steve Scalise of Louisiana and hitting aides and Capitol police as congressmen and others dove for cover, according to the Associated Press.

The assailant, who had nursed grievances against President Donald Trump and the GOP, fought a gun battle with police before he, too, was shot and later died.

Colleagues said Scalise had been fielding balls at second base at a local park in Alexandria, just across the Potomac River from the nation's capital, as the Republicans practiced for their annual game with Democrats. He dragged himself away from the infield leaving a trail of blood before fellow lawmakers could rush to his assistance. He was listed in critical condition Wednesday night at a Washington hospital, which said he will require several more operations. 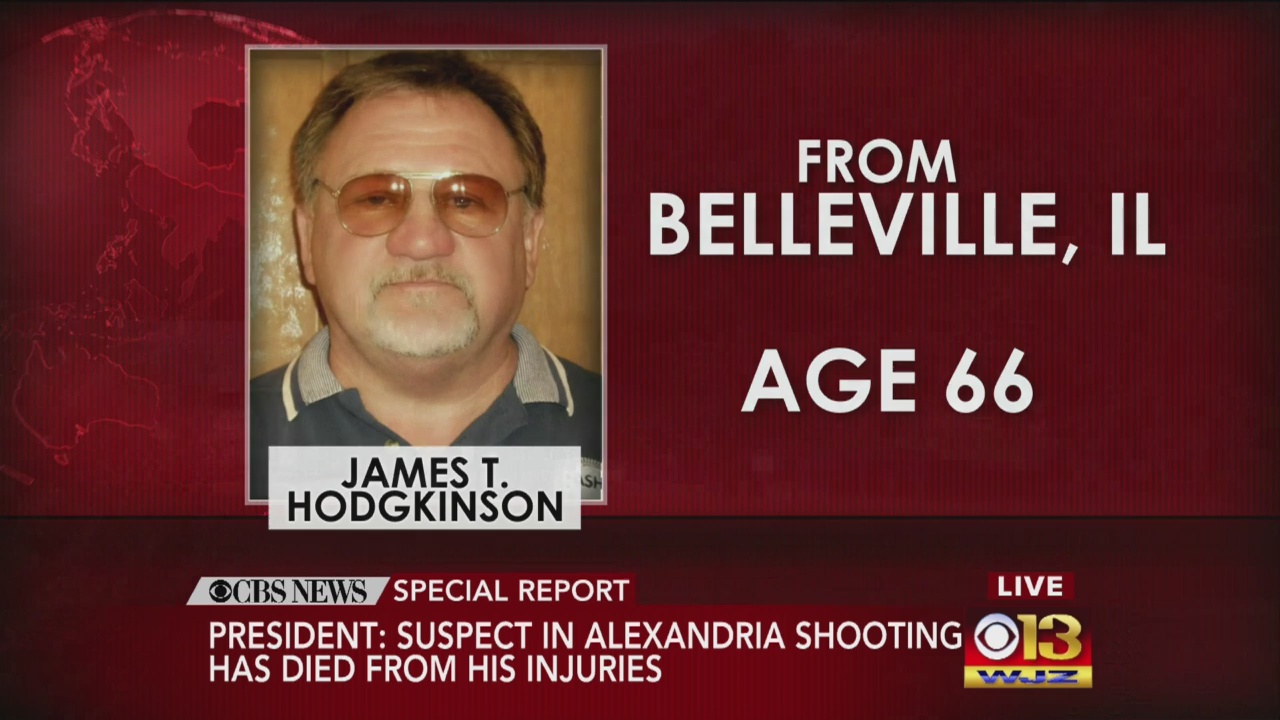 The shooter was identified as James T. Hodgkinson, a 66-year-old home inspector from Illinois who had several minor run-ins with the law in recent years and belonged to a Facebook group called "Terminate the Republican Party." He had been living out of his van in the Alexandria area in recent months, the FBI said.

Capitol Police officers who were in Scalise's security detail wounded the shooter. He later died of his injuries, Trump told the nation from the White House.

"Everyone on that field is a public servant," Trump said, his tone somber, America's acrimonious politics set aside for the moment. "Their sacrifice makes democracy possible."

Lawmakers noted their good fortune in having armed protectors on hand — "Thank God," they exclaimed over and over — and said otherwise the shooter would have been able to take a huge deadly toll.

The events left the capital horrified and stunned, and prompted immediate reflection on the current hostility and vitriol in American politics. Lawmakers called for a new dialogue on lowering the partisan temperature, and Trump urged Americans to come together as he assumed the role of national unifier for one of the first times in his presidency.

Trump later visited the hospital where Scalise was recovering. The president then tweeted: "Rep. Steve Scalise, one of the truly great people, is in very tough shape - but he is a real fighter. Pray for Steve!"

Proceedings were canceled for the day in the House, and instead Speaker Paul Ryan of Wisconsin and Democratic leader Nancy Pelosi of California issued their own calls for unity. "An attack on one of us is an attack on all of us," Ryan said, to prolonged applause.

Shortly after the shooting, Bernie Sanders, the former candidate for the Democratic presidential nomination, said on the Senate floor that the shooter apparently was a volunteer for his campaign last year. Sanders said he denounced the violence "in the strongest possible terms."

Scalise, 51, the No. 3 House Republican leader, was first elected in 2008. The popular and gregarious lawmaker is known for his love of baseball and handed out commemorative bats when he secured the job of House whip several years ago.

The shooting occurred at a popular park and baseball complex where Republican lawmakers and others were gathered for a morning practice about 7 a.m. They were in good spirits despite the heat and humidity as they prepared for the annual congressional baseball match that pits Republicans against Democrats. The popular annual face-off, which raises money for charity, is scheduled for Thursday evening at Nationals Park across the Potomac River in Washington, and will go forward as planned.

Hodgkinson has been in the area since March, living out of his van, said Washington FBI Special Agent In Charge Tim Slater. Democratic former Alexandria Mayor Bill Euille said he had spoken often with the man on recent mornings at the nearby YMCA.

Hodgkinson's apparent Facebook page included strong criticism of Republicans and the Trump administration. But Slater said authorities were still working to determine a motive and had no indication Hodgkinson knew about the baseball practice ahead of time.

The GOP lawmakers' team was taking batting practice when gunshots rang out and chaos erupted.

After Scalise was hit, said Rep. Mo Brooks, an Alabama Republican, the congressman "crawled into the outfield, leaving a trail of blood."

"We started giving him the liquids, I put pressure on his wound in his hip," Brooks said.

The gunman had a rifle and "a lot of ammo," said Sen. Jeff Flake of Arizona, who was at the practice.

Texas Rep. Joe Barton, still in his baseball uniform, told reporters that Scalise's security detail, Capitol Hill police and then Alexandria police returned fire in a battle that lasted as long as 10 minutes and included dozens of shots.

"The security detail saved a lot of lives," he said. "It was scary."

Lawmakers took cover in the dugout. Barton said his son, Jack, got under an SUV.

Texas Rep. Mike Conaway described what sounded like an explosion, then lawmakers scattering off the field as police roamed in search of the gunman and engaged him.

"The guy's down to a handgun, he dropped his rifle, they shoot him, I go over there, they put him in handcuffs," Conaway said, adding that if the shooter had "gotten inside the fence, where a bunch of guys were holed up in the dugout, it would have been like shooting fish in a barrel."

Rep. Jeff Duncan of South Carolina said he had just left the practice and encountered the apparent gunman in the parking lot before the shooting. The man calmly asked which party's lawmakers were practicing and Duncan told him they were the Republicans. The man thanked him.

The wounded Capitol Police officers were identified as David Bailey, who was treated for a minor injury, and Crystal Griner, who attended Hood College in Frederick, was shot in the ankle. Also wounded was former congressional aide Matt Mika, who now works for Tyson Foods in its Washington office. Mika's family said the lobbyist was shot multiple times and was in critical condition following surgery.

The event raised questions about the security of members of Congress. While the top lawmakers, including Scalise, have security details, others do not and regularly appear in public without protection. The last time a lawmaker was shot was when Democratic Rep. Gabby Giffords of Arizona was hit in the head and grievously injured while meeting with constituents at a supermarket parking lot in 2011.

Following the Giffords shooting, lawmakers have held fewer open town halls and have been advised to increase security at such events.

This story will be updated as more details become available.