BALTIMORE (WJZ) -- Severe weather rolled across much of Maryland on Thursday, leaving widespread damage and thousands without power during the height of the storm.

Multiple trees and power lines were downed, with siding and shingle damage to homes.

Along Solomons Island Road and Virginia Avenue in Edgewater, a large tree toppled into someone's home. 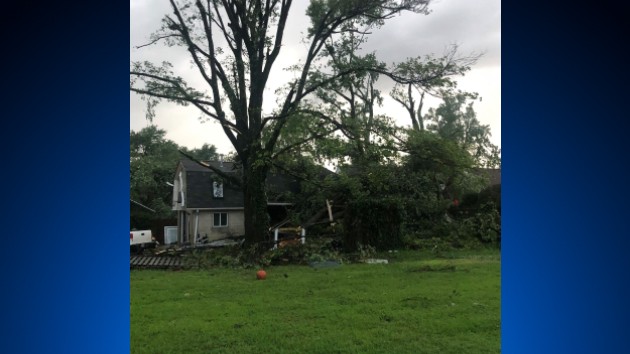 Temperatures topped out around 90 degrees, and high dew points contributed to the instability in the atmosphere, which created conditions favorable for the storms.

Most of Maryland was under a tornado watch through Thursday afternoon. All tornado watches, however, have since been canceled.

An Areal Flood Warning is in effect overnight for Anne Arundel and Prince George's counties.

In the Baltimore area, more than 14,000 BGE customers were without power during the height of the storm. Many of the outages were clustered in northern Baltimore City, southern Baltimore County and southern Anne Arundel County.

Montgomery County officials received multiple reports of damage. A tree reportedly fell on a home in Silver Spring. PEPCO reported more than 5,800 customers were without power in both Montgomery and Prince George's counties during the height of the storm.

The start to the Labor Day Weekend, however, will feature plenty of sunshine and less humid temperatures, according to WJZ's Meg McNamara.