BALTIMORE (WJZ) -- Six people were arrested at the Inner Harbor Saturday night after police say fights broke out among a crowd of juveniles.

Witnesses said it was complete chaos at the Inner Harbor, where large crowds of people were seen running with fights breaking out among the crowd.

It was chaos at the Inner Harbor Saturday night. Cell phone video shows crowds of people running in full force to get away. 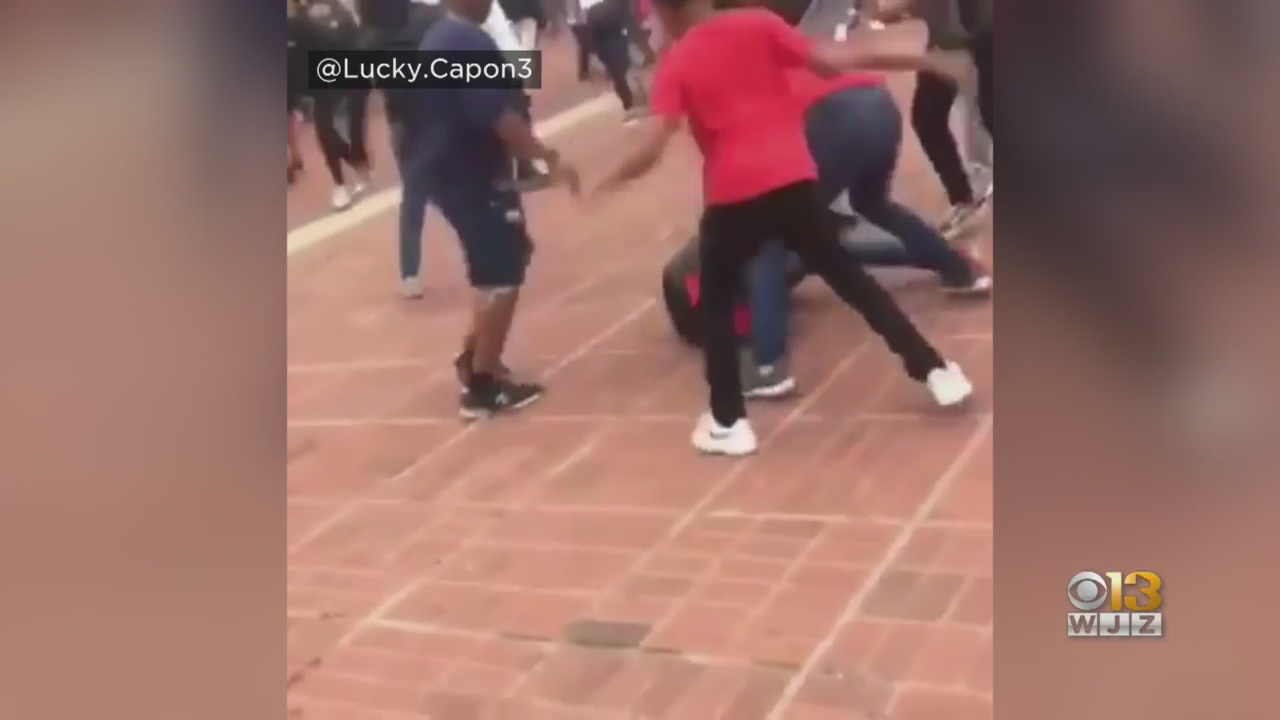 Others witnessed the mayhem from the ground.

"Just children of all ages running amok then they would just start hitting people they would try to split in different directions to get away from the cops and it was just a massive rush," one woman said.

"I thought it was like a parade or something," said another man.

Baltimore city police tell WJZ they received calls around 6:30 p.m. of a large crowd of juveniles at the inner harbor near the corner of Light and East Pratt streets.

Police said no major injuries were reported and six people were arrested.

City leaders calling it a violent turn during a holiday weekend.

"We had approximately, 400 kids [at] the harbor," said Councilman Eric Costello. "By large most of those kids were just enjoying the weekend and some nice weather, but we did have a small group of kids who were acting inappropriately running on the roofs of cars so that's very disappointing that type of behavior is unacceptable."

Costello said the six people arrested were charged with destruction of property and disorderly conduct.

Mayor Jack Young said he's working with police to find a solution as visitors to Baltimore's crown jewel came face to face with its violence.

Young said he plans to speak with both city police and school police to come up with a plan to stop the fights breaking out across the city.

"How are we going to invite people down to the Inner Harbor if they are afraid of the youth? Let's get these youth back into work programs," said She'Ron McVay, of Baltimore.

The Baltimore City Fraternal Order of Police tweeted that officers should, "Protect each other and don't fall into the trap that they are only kids. Some are criminals! Keep the current policies and consent decree in mind..."

That comment drew criticism online when some called it racial profiling. The ACLU said "comments like this do nothing to repair that trust,"

City Police reiterated Monday evening that officers were at the Inner Harbor to protect everyone.

"We knew ahead of time there was a gathering coming at 5 o' clock, so we had officers here already, so we were prepared for whatever," said Colonel Richard Worley, Baltimore Police.

Councilman Eric Costello said two rec centers have opened in that district in the last few years, but he said he's working to secure more activities for the youth.

"By enlarge, most of those kids were just enjoying the weekend and some nice weather but we did have a small group of kids who were acting inappropriately running on the roofs of cars so that's very disappointing," Costello said.