TOWSON, Md. (WJZ) -- Six of the seven people arrested this month for a murder in July in Towson are members of the violent street gang MS-13 and were in the country illegally, an Immigration and Customs Enforcement spokesperson said.

The group members are part of a federal gang database. One of the suspects is just 16 years old.

Daniel Alejandro Alvarado Cuellar, 21, was murdered in the attack outside his home in the 8400 block of Loch Raven Boulevard.

"The cause of death was multiple stab wounds, and through our investigation, we were able to determine it was more than one person who caused those stab wounds," Baltimore County Police Officer Jen Peach said.

While MS-13 is typically associated with Maryland's D.C. suburbs, there are a number of members in the Baltimore area, said Tony Avendorph, a retired gang Investigator in Prince George's County and Los Angeles.

"I wouldn't be a bit surprised Baltimore County doesn't also have a gang database and they were aware of them," he said. "They're starting to fan out now into Baltimore County and other counties. It's just a quick ride up I-95."

One year ago, Anne Arundel County touted state grants worth more than half a million dollars to combat gangs.

The then-county executive estimated there are 200 MS-13 members living in the county, and they arrested 70 in the prior three years.

Among their victims in Maryland is 15-year-old Demaris Reyes, who was tortured and stabbed to death two years ago. Her mother remembered her as a "sweet girl" who was "trusting."

President Trump has frequently lashed out at MS-13, tying the gang to the immigration debate, which critics believe is a way to demonize immigrants.

In 2017, Jeff Sessions, who was United States' Attorney General at the time, came to Baltimore to speak about MS-13, and he referenced Reyes' murder. "MS-13 is one of the most dangerous gangs in America," Sessions told reporters in prepared remarks at the time. "A 15-year old girl from near here in Gaithersburg was stabbed 13 times with knives and a wooden stake by MS-13 members. Her killers filmed the murder so they could show their leaders back in El Salvador."

The recent Baltimore County case has all the hallmarks of MS-13:  The victim was followed then jumped by multiple people and stabbed with a machete.

Police said investigators were able to recover video that led to multiple arrests in connection to the murder. Police have since arrested: 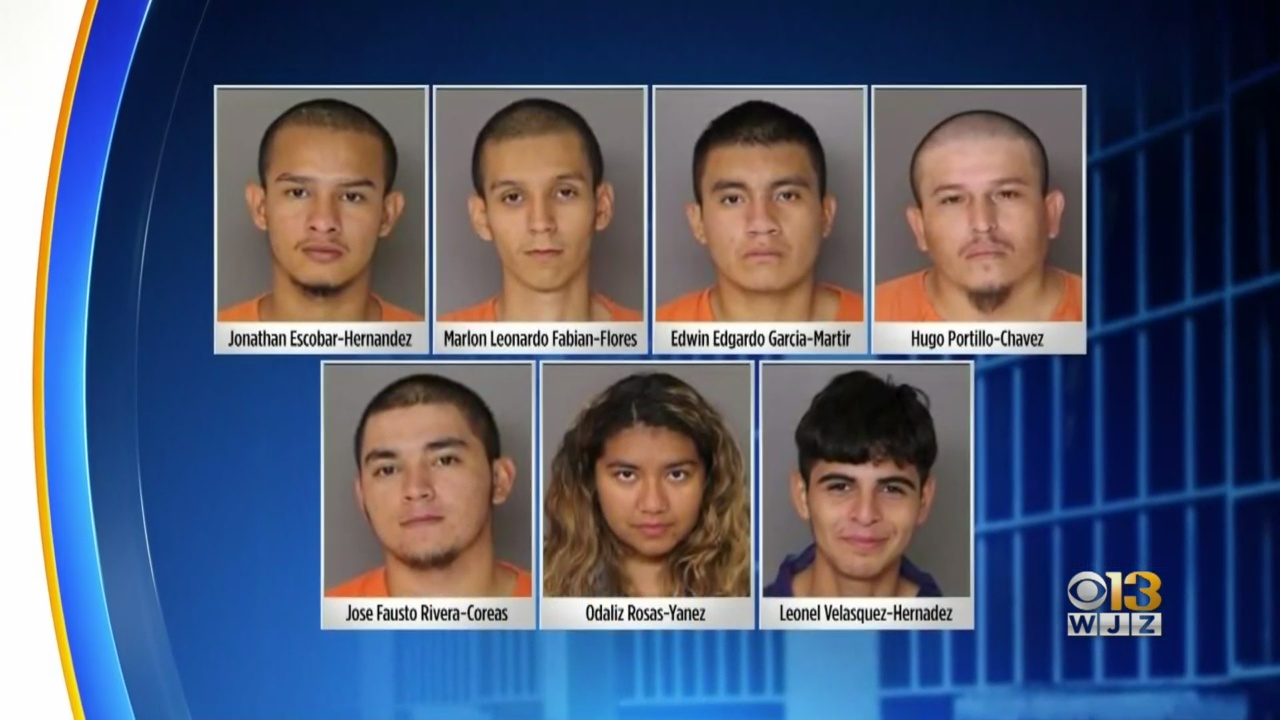 All of the suspects are being held without bail at the Baltimore County Detention Center. ICE is asking for an immigration detainer while the agency decides whether to deport them or allow them to face trial in Maryland.

"Very seldom do they use a firearm," Avendorph said. "It's always something sharp. They want to send a message."

He believes the key to combating the gang is communication among local, state and federal law enforcement.

"This is a problem that started back in the 1980s and hasn't really stopped," he said.