RELATED: Who's Next? Trial Dates For Officers In Freddie Gray Death

Nero waived his right to a trial by jury. His bench trial began May 12 and final arguments were heard Thursday.

WJZ's Ron Matz says the verdict announcement was attended by a group of Baltimore City police officers, most in plain clothes. After the verdict was read, they came up to Nero one by one, embracing him and patting him on the back. Nero was seen with tears in his eyes.

RELATED: Who is Officer Edward Nero?

Gray, a 25-year-old black man from the Sandtown area of Baltimore, died on April 19, 2015 of a spinal cord injury he sustained while in police custody.

His death set off more than a week of protests followed by looting, rioting and arson that prompted a citywide curfew.

"I have to commend Judge Williams on not being influenced by public opinion," Murphy said. "It's a very, very difficult job to sit as a judge under these enormously stressful conditions, and once again Barry Williams has shown he is a fair and impartial man... He showed tremendous courage in ruling against public opinion."

"I don't think anybody should be upset with this verdict nor do I think anybody should have been elated about a guilty verdict," he added. "Only the people who sat through this trial and heard all of the evidence have a right to have an opinion about whether his opinion was fair and whether or not it was warranted under the circumstances. So we should all understand that we all have opinions, but unless they're based on the facts and all of the facts, those opinions are essentially irrelevant to this process."

Mayor Stephanie Rawlings-Blake shared a similar sentiment in a statement she released shortly after the verdict was handed down.

"Today Judge Barry G. Williams found Officer Edward Nero not guilty of all criminal charges. This is our American system of justice and police officers must be afforded the same justice system as every other citizen in this city, state, and country. Now that the criminal case has come to an end, Officer Nero will face an administrative review by the Police Department. We once again ask the citizens to be patient and to allow the entire process to come to a conclusion. In the case of any disturbance in the city, we are prepared to respond. We will protect our neighborhoods, our businesses and the people of our city."

Baltimore City Fraternal Order of Police Lodge 3 responded positively to the verdict shortly after it was announced.

According to WJZ's Mike Schuh, who was outside the courthouse when the verdict came down, there was a huge "roar of disapproval" from protesters.

One of the people leading the charge was Rev. Wesley West.

"I'm angry because this is what we deal with, and when I say 'we,' we're talking about the black community and I'm a part of and represent that community as well, it seems like we have no voice when it comes to these issues," West said.

"When it comes to conversations like this, we're not involved. This should have been a jury trial where the community had a voice in this case. Of course a system works in a system's favor, that's how I look at it. That judge represents the system, and the police officer represents a system, but they're all one system working together. And again I don't think case was actually tried fairly when it comes down the community being involved."

Nero is one of six officers who was charged in relation to Gray's death, and the second to be tried.

He left court under heavy guard moments after Judge Williams acquitted him of all charges.

"If he was found guilty I believe many officers would have been hesitant to do the right thing when it came time to deal with crime because they would be afraid to be prosecuted and that's what the prosecution was trying to do," said Nero's father, Edward Nero Sr. "It's not just a victory for my son, it's a victory for all police officers including the other five."

Officer William Porter's trial ended in a hung jury and mistrial in December. He will be retried in September.

"I think to convict a police officer it requires very strong evidence," University of Maryland Law Professor Doug Colbert told WJZ's Linh Bui Monday. "Proof beyond a reasonable doubt is protection for every accused person, but there have been so few successful prosecutions of police officers … so it's going to take a lot of evidence that an officer should be held criminally responsible." 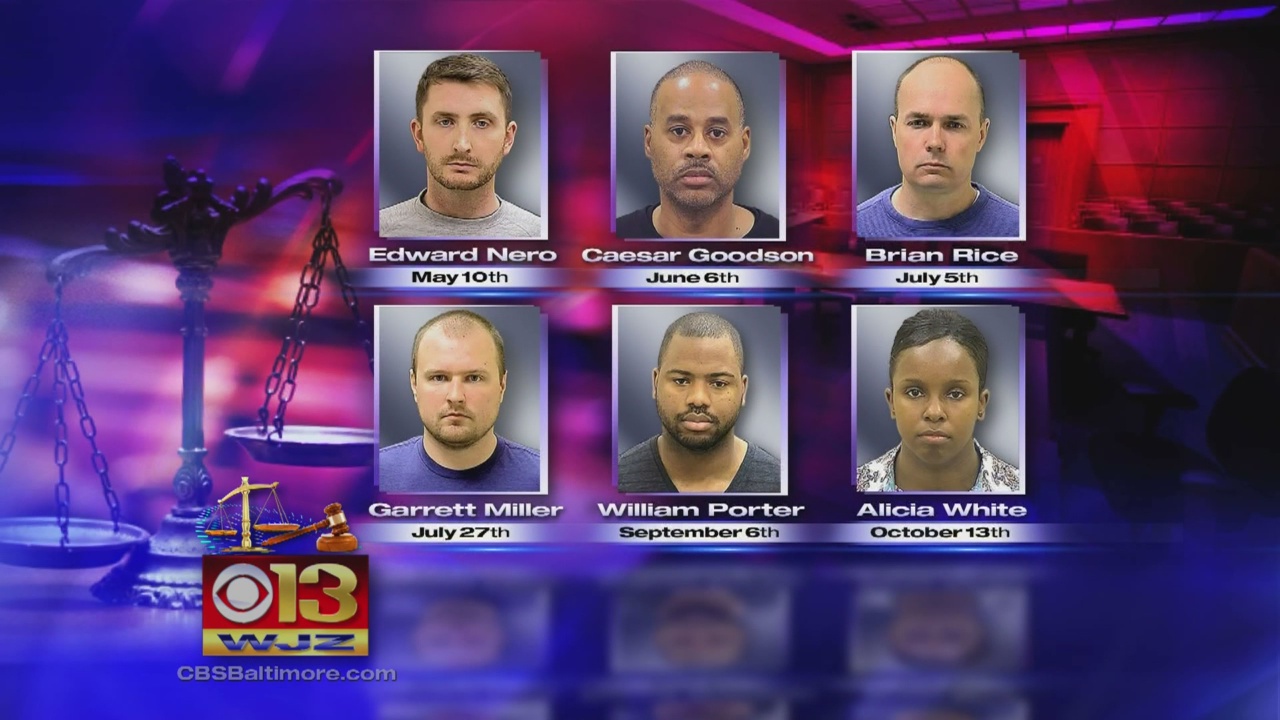 Goodson's trial, which was already delayed once, is set to begin June 6. He was the driver of the van that transported Gray from the spot where he was arrested to the police station. When the van arrived at the Western District police station, Gray was already critically injured and unresponsive.

RELATED: Freddie Gray: A Timeline From His Arrest To Today