Officials believe it could be worse than last time -- although no injuries or deaths have been reported so far. the Howard County Government has set up a hotline to provide information and assistance at 410-313-2900. Information can be found on their social media accounts as well.

One person has been reported missing. Eddison Hermond was reported missing around 12:30 a.m. Monday. He was last seen in a white shirt and black shorts around 5:00 p.m. in parking lot D behind La Palapa Grill and Cantina at 8307 Main St., Ellicott City Md.

Hermond was former Air Force and is now in the National Guard. Witnesses say he was swept towards the Patapsco River and emergency crews are looking for him.

"It's indescribable, it really was," said Howard County Executive Allen Kittleman. "I don't think I'm without exaggeration saying that this is worse than July 30, 2016. I can just tell you my heart is broken."

In old Ellicott City, which sits in a gully, eight inches of rain in a few hours turned the street into a raging river. In some cases, water reached as high as the second floor of some buildings, stranding many seeking higher ground.

The bursting Patapsco River took with it furniture, mannequins, walls from buildings upstream, and even numerous cars. 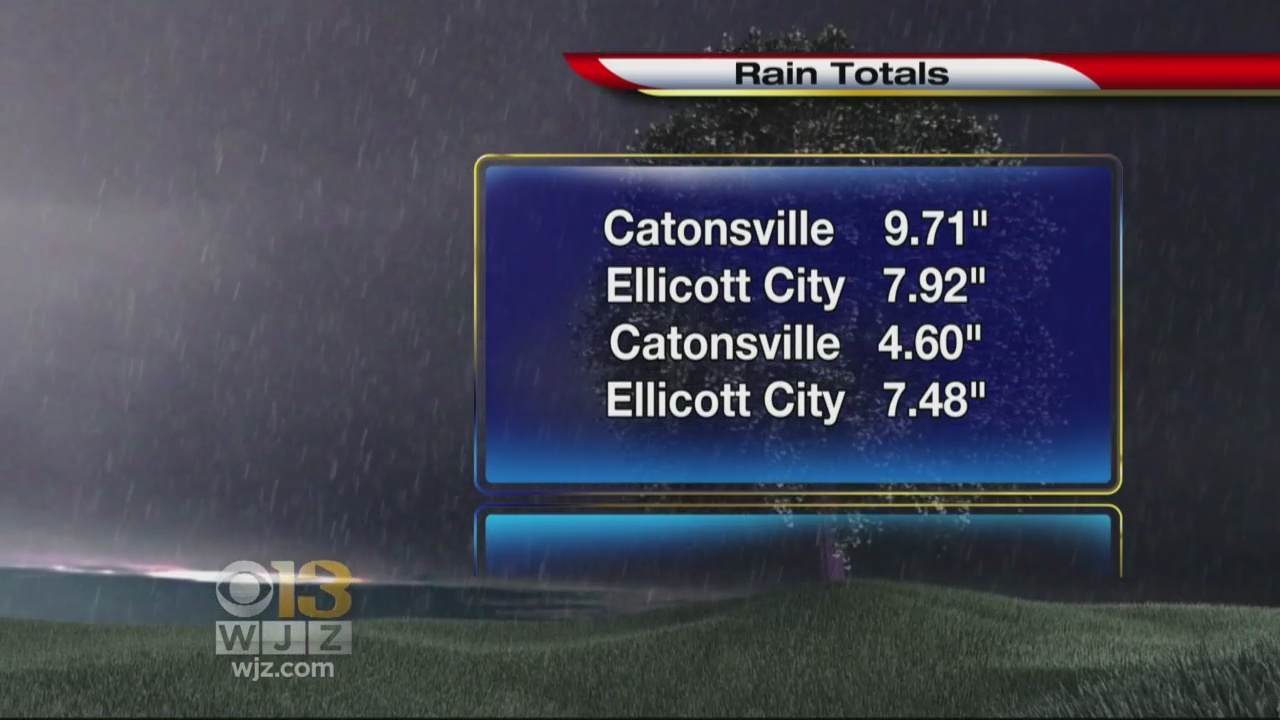 WJZ's Kimberly Eiten said Main Street was a disaster zone by late Sunday night, with piles of debris strewn about the roadways. Cars that were washed away were wrapped into trees and sitting abandoned. The destruction left so many asking, "What now?"

Under the glow of police lights, first responders walked through the wreckage that remained throughout Main Street on Sunday night. Just hours earlier, the sidewalk was invisible, with waves of brown water blanketing the area. It was a stunning deja vu for business owners who make a living in the city, like Kelli Myers.

"That's when we realized that the water was coming too fast down this one street," business owner Kelli Myers recalled. She raced against the rains to check on the employees of her two shops. She didn't make it that far, rescuers brought her back to dry land safe, but shocked.

"Honestly, I can't believe I'm sitting here watching the water and it's still flowing and flowing," she told WJZ.

The floodwaters filled the first floors of businesses, some with banners hung that promoted their grand reopening following the last storm.

Kittleman is promising help for owners from a state and county level, but some say their storefronts may stay empty.

"I don't know if I'll be able to come back. I don't know if I will come back," admited Myers. She told WJZ she does not have flood insurance and is still paying back loans from the 2016 floods.

Eiten reported the destruction covered Main Street from top to bottom. First responders could be seen tripping even as their flashlights were guiding them because of so much hidden rubble on the ground — a far different image from the charming Ellicott City that Marylanders have grown to love.

"We went into the studio, looked out the windows, and we saw a white vehicle go down, hood under, brake lights on," said Ellen Driscoll, an Ellicott City resident.

Business owners returning to Main Street to check on their livelihoods are already devastated by what lies ahead.

"We just went through this a year ago and we have to go through it again. You can see the staircase is completely wiped out," one resident told WJZ.

"To see this happen to them again is heartbreaking. I don't have a word for them right now. I don't know what I would tell them," said Kittleman.

"Think about how hard it is for us, and then multiply that times one million, and that's how hard it is for people who live and work on Main Street," Kittleman added. "That's why I'm emotional, because those are my friends, those are our friends. There are people we got to be really close to over the last couple of years."

"It was indescribable, it really was," resident John Strycula said.

The town was in recovery mode Sunday night as first responders are searching the first floor of buildings and looking for people that are trapped.

"I actually know a lot of people that work down here, and a lot of them were trapped on the second and third story floors because they couldn't get out," said Ellicott City resident Delainey Bellis.

"In a normal heavy rain event, you wouldn't see this amount of flooding, where you see cars floating down the road," Muccilli said. "This was a true flash flood."

Of the city's residents and business owners, Kittleman says "they are faced with the same daunting task again."

Hogan also toured the area Sunday and promised "every bit of assistance we possibly can."

"They say this is a once every 1,000-year flood and we've had two of them in two years," Hogan said.

The sight came as a shock to many in the middle of their Memorial Day weekend.

Some people reported hearing a blaring alarm during the flooding. Others said they gathered in the second story of a building to anxiously watch the seething waters.

One sight during the flood: a handmade, white flag hung from an upper story of a Main Street building bearing the letters SOS.

"If you are trapped, we are coming," the Howard County Department of Fire and Rescue Services tweeted at one point. It added that multiple rescues were carried out, and rescue swimmers were called in. Swift water units from as far away as Northern Virginia also were summoned.

The county has opened its recreation center for those who may need shelter overnight at Roger Carter Community Center at 3000 Milltowne Drive.

RELATED: How To Help With The Ellicott City Flooding

For those impacted by yesterday's flood in Ellicott City, the county has opened a hotline to provide information and assistance at 410-313-2900. For emergencies, call 911.