WASHINGTON (WJZ)—Chilling new video released by the FBI shows Aaron Alexis hunting for victims inside building 197 at the Washington Navy Yard. He killed 12 people before being killed by police.

Rochelle Ritchie has more on the troubling video and pictures.

FBI officials say the gunman believed he was being controlled by electromagnetic waves. He started working at the Navy Yard as a contractor just a week before carrying out the massacre.

Video released by the FBI on Wednesday shows Alexis, 34, pulling into the parking garage of the Washington Navy Yard after passing through a security gate.  It shows him walking through the front door of the building while carrying his backpack full of weapons and ammunition. He assembles his Remington 870 in a bathroom and comes out armed and ready to kill.

"We can say that the Remington 870 shotgun had been altered with a sawed off barrel and stock. Purple duct tape covered the end of the stock," said Valerie Parlave, FBI.

The 31 seconds  of video shows Alexis looking into the doorways for victims and then making his way to another floor. He's seen hiding behind a wall before running toward the people in the background.

"Two of the NCIS responders were teamed with a metropolitan police officer when the three were fired upon by the shooter," said Michael Monroe, NCIS.

The shooting lasted more than an hour before Alexis was shot and killed. 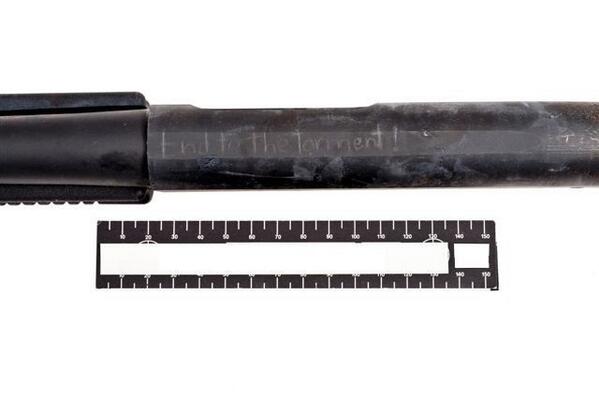 The FBI also released photos of the weapon they say Alexis used in the shooting.  The weapon had handwritten etchings that said "better off this way," "end to the torment" and "not what yall say."

The backpack Alexis used to hide his weapon was left in the restroom.

FBI officials say the evidence collected as of Wednesday shows signs of a delusional man.

"There are multiple indicators, but Alexis held a delusional belief that he was being controlled or influenced by extremely low frequency, or ELF, electromagnetic waves," Parlave said.

Officials say Alexis acted alone and did not target anyone. He had a valid pass to gain entry into the building.

"He was able to obtain a firearm two days before he carried out an attack that was planned to kill as many innocent civilians as possible," said Ronald Machen Jr., U.S. Attorney Washington, D.C.

Search warrants have now been issued for the hotel room where Alexis was staying.

FBI agents say evidence shows Alexis was prepared to die and accepted the fate of his consequences.