BALTIMORE (WJZ) -- After weeks of dredging and days of tugging, the Ever Forward still hasn't budged. It's the massive container ship that has been stuck in the Chesapeake Bay for more than three weeks.

Now, the U.S. Coast Guard moves to Plan B: removing the nearly 500 containers on the 1,100 foot-long ship, and more dredging.

"Salvage experts determined they would not be able to overcome the ground force of the EVER FORWARD in its current loaded condition," the Coast Guard said in a statement.

Now, crews will dredge to a depth of 43 feet deep and two crane barges will be installed to remove those containers.

The containers will be removed from both sides of the ships and placed on receiving barges. Those barges will shuttle the containers back to their original onboarding facility, Seagirt Marine Terminal in Baltimore, where they will be offloaded, the Coast Guard said.

The offloading will happen only during the daytime for safety reasons. Once the containers are removed, tugs and pull barges will attempt another refloat.

The Coast Guard said the operation should take two weeks, but that timeline could change for factors like weather

The Ever Forward ran aground 24 feet deep into the mud on March 13. 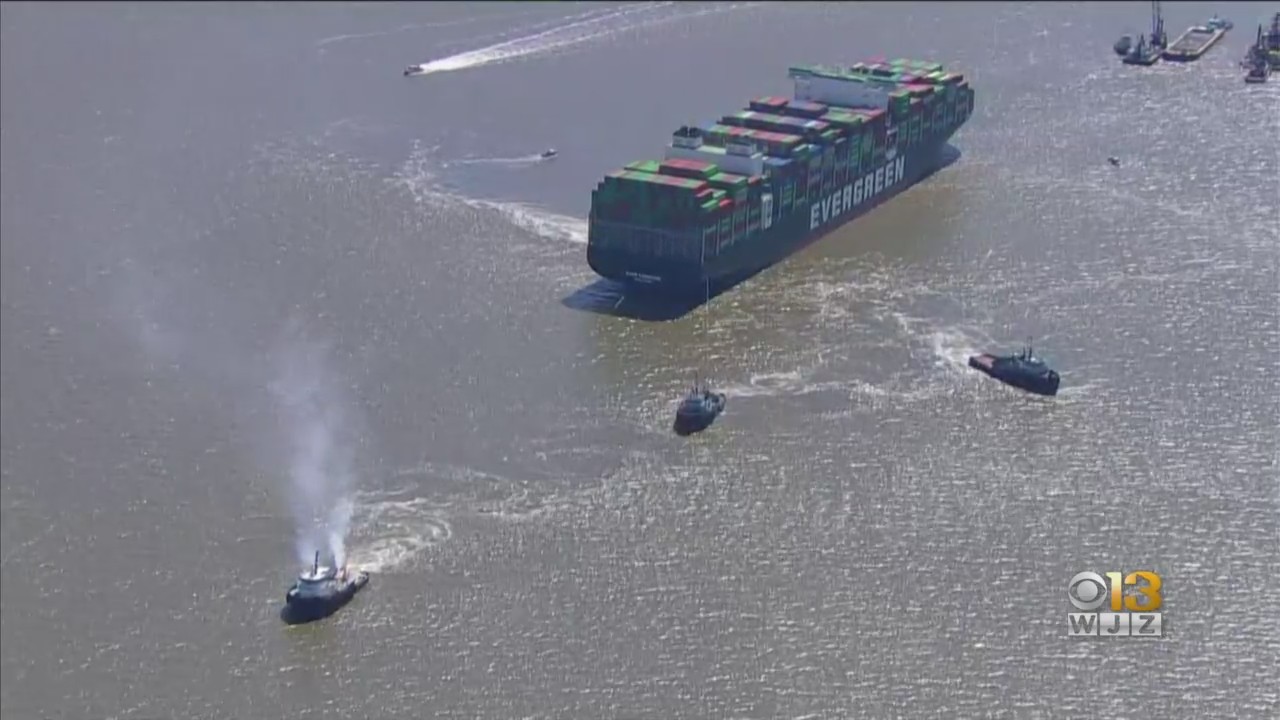 Crews have already had to dig out at least 84,000 cubic yards of mud from around the vessel. The Department of the Environment said that's about 27 barges worth of mud.

Last Tuesday, crews made their first refloat attempt after a week of dredging. Five tugboats couldn't get the ship moving forward, so the next day, they tried seven tugboats. No dice.

As of now, the ship has remained stable and shown no signs of pollution, but the Coast Guard and responders are continuing to monitor the ship.

The last time something like this happened was last year a ship owned by the same company, the Ever Given, got stuck and blocked the Suez Canal in Egypt, and that disrupted billions of dollars a day in global trade.

During the Suez fiasco last year, istheshipstillstuck.com, went viral, along with hundreds of Ever Given memes. That website has now been repurposed for the Ever Forward.

The Evergreen Line determined last week that its shareholders would have to proportionately share the losses associated with the Chesapeake Bay debacle under a maritime law known as "general average."

"The dredging operation and refloating attempts have been conducted for the common safety of the vessel and cargo, and in the interests of all parties involved in the voyage," the company said in a statement. "Considering that the complexity of further rescue operations will require more manpower, equipment and costs to refloat the stranded vessel as soon as possible, Evergreen has for cautionary purposes declared General Average and nominated Richard Hogg Lindley as the GA adjuster."