Baltimore's stadiums have raised the stadium food bar by creating some unique and mouth-watering dishes that have ever graced the field. Skip the standard fare this season and snag the most sumptuous spins on classic stadium foods. Game time has never been this delicious!

Although a new addition to the O's Ballpark, Stuggy's is well-known around Baltimore for delivering old-fashioned hot dogs with a modern twist. One of its most popular combinations, the crab mac n' cheese dog is worth the price of admission alone. This local specialty is as amazing as it sounds: a plump hot dog topped with macaroni and cheese, then graciously topped again with a mound of fresh lump crab meat that has been lightly tossed in Old Bay. Another fan favorite, the Birdland dog, offers an all-beef Stuggy dog with sweet tomatoes, potato and beef hash completed with the perfect crunch of fried crispy onions. If these two hot dogs don't have fans drooling before the first inning is over, the rest of the menu is sure to satisfied. Even out-of-towners are honored by its inimitable Chicago- and Carolina-style dogs.

Gino's boasts the ultimate burger for the Baltimore sports fans-– a hamburger and a crab cake under a single bun. Beef lovers will also enjoy specialties such as Gino's Giant with secret sauce, double or triple cheeseburgers, and burger sliders. For those who prefer white meat, Gino's Chicken Giant burger is another winner that comes with its famous secret sauce, or try to choose between a hot buffalo chicken sandwich, tenders baskets and chicken sliders. Wash down every meal with a refreshing beer or soda, but on those hot days, nothing can compete with a thick creamy milkshake here. Gino's shakes come in 20 flavors and its Ice Cream Quakes offer eight yummy toppings. 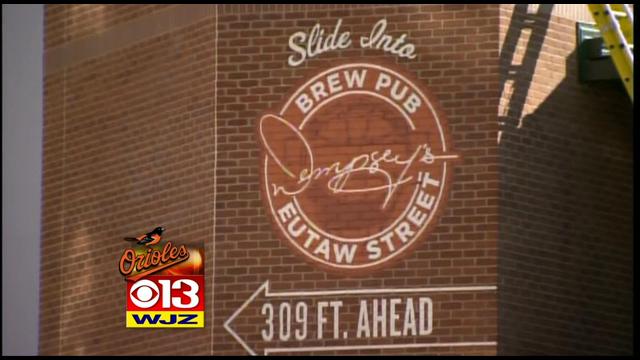 With a Hall of Flame list of delectable burgers, the die-hard fan can't say "no" to the black and orange version that is topped with fresh orange bell peppers, caramelized onions and sharp cheddar cheese. More home run hits are Dempsey's rock fish tacos or the Camden Yards crab cake sandwich, which is served with a side of homemade Old Bay kettle chips. For a quick bite, try its bacon on a stick and try to savor this slow-smoked treat that's dipped in Old Bay maple syrup and served in a Natty Boh bottle. A Minor League menu for kids also offers all-inning favorites such as mini burgers and grilled cheese served with fries.

The Baltimore Dip and The Pigskin

The Craven Zone is a great place to visit for any starving Ravens fan. Start with its deliciously crafted Baltimore dip sandwich that is packed full of shaved prime rib and then topped with plenty of cheddar cheese toasted pepper relish, a horseradish sauce with a kick and a bonus dollop of crab dip. The pigskin sandwich is a touchdown for those with a sweet tooth as it comes with pork that has been slow-roasted in a tangy mango-jalapeno glaze and is complimented by a healthy topping of red cabbage slaw, roasted garlic sauce and queso manchego cheese. The Craven Zone concession stands also provide all of the traditional stadium foods including hotdogs, pretzels, nachos and peanuts, as well as sodas and beer.

A long-time favorite at the Ravens stadium since its stand debut in 2007, Bell's famous turkey & black bean chili is now keeping fans satisfied at 15 concession stands on game day. Its claim to fame is an incredible no-guilt chili that tastes even better than the calorie-packed traditional recipe. Bell's homemade chili is not only lower in fat, but higher in fiber and antioxidants. Plus, it packs a smooth and flavorful taste with an impressive after-heat bang. This one-of-a-kind chili is the perfect choice for game day.

Keri Ann Beazell is a Baltimore writer following the latest developments in arts and culture, natural wonders, lifestyle and pets. She enjoys promoting thought-provoking discussions, education, new ideas and smiles among readers. Follow her on Twitter at @KtBlue16 and online at Examiner.com