Food trucks have been gracing all of the foodie shows for years, and now they're making quite the impact on the local dining scene. Food trucks have become so popular in Baltimore that there are entire events for them through The Gathering Baltimore. The Traveling Food Truck Festival chooses different locations to set up shop and offers a variety of dining options. Many of the city's food trucks travel on their own, as well, bringing delicacies directly to its customers. Read on for some of the best food trucks in Baltimore.

Kooper's Chowhound Burger Wagon is one of the original food trucks in Baltimore and has been on the road for more than three years. The traveling version of the legendary Kooper's Tavern offers several burger options, sides and a build-your-own-burger option. Kooper's keeps fans up-to-date on its daily location via Twitter @BRGRwagon, Facebook www.facebook.com/BRGRwagon and its website. Kopper's Chowhound also offers catering for any event.

For traditional grilled cheese, choose from wheat, rye, sourdough or multi-grain bread and five kinds of cheese. Specialties like the Caribbean grill include mango salsa, Swiss cheese and honey mustard on ciabatta bread. GrrChe nods to Baltimore with a crab macaroni grilled cheese sandwich with lump crab cake and fresh mac and cheese. The truck offers online ordering for lunch pick-ups, as well. Follow GrrChe on Twitter @Grrche or on Facebook www.facebook.com/GrrChe to find out where the truck will be offering its traditional and specialty grilled cheese sandwiches.

The Gypsy Queen Cafe offers menu items named for some of Baltimore's most beloved neighborhoods, like the Fells Point, Greektown and Waverly. The truck was named the best food truck in Baltimore by City Paper in 2011 and 2012. In 2012, Baltimore Magazine named Gypsy Queen the best food truck, and the truck was featured on The Food Network. The Gypsy Queen Cafe is introducing a new truck, the Lil' Gypsy. You can find the positions of the trucks on its Facebook www.facebook.com/gypsyqueen.foodtruck or on Twitter @TheGypsyTruck. 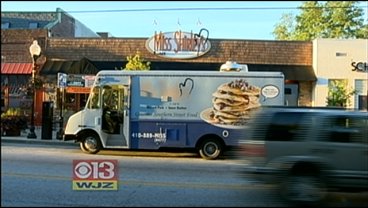 Miss Shirley's has been serving its revered breakfast and lunch favorites for years in Roland Park, downtown Baltimore and Annapolis. Recently, the restaurant took to the road with its own food truck due to the rising popularity and demand of customers wanting their food on the go. Menu items include savory grits with bacon, crispy chicken 'n waffles and its famous buttermilk pancakes stacked high and doused in maple syrup. The truck is typically on location from 10 a.m. until 2 p.m. Truck locations can be found on the website, Facebook www.facebook.com/MissShirleysFoodTruck or on Twitter @MissShirleys.

Unlike many of Baltimore's food trucks, Iced Gems started without a brick-and-mortar location. Cupcake offerings include classics like chocolate and red velvet and specialties like Caribbean coconut and PB&J. Since its success on wheels, Iced Gems has opened a retail space in Reisterstown. The trucks use Twitter @IcedGemsBaking and Facebook www.facebook.com/IcedGemsBaking to alert fans of its daily location.

Renee Libby Beck spends her days as a public relations and social media manager for Medifast, Inc. and any spare time that she can find as a freelance writer. Her work has been published in local and national publications. Renee also serves as the Baltimore Food Examiner for Examiner.com.