BALTIMORE (WJZ)—Baltimore Circuit Court Judge Barry Williams has ruled that Lt. Brian Rice, the highest-ranking Baltimore City Police officer to be charged in relation to the death of 25-year-old Freddie Gray, is not guilty of all the charges he faced -- involuntary manslaughter, reckless endangerment and misconduct in office.

Gray died on April 19, 2015, a week after he suffered a severe spinal cord injury while being transported in the back of a city police van. His death prompted riots last year in Baltimore.

Rice is the third officer charged in the Gray case to get a full acquittal from Judge Williams.

"The judge decided that there was no proof of any of the charges yet again," according to WJZ's Mike Hellgren, who was inside the courtroom as the verdict was read.

"He had the same reasoning in the prior cases. For involuntary manslaughter they would have had to prove that this was grossly negligent conduct. He said he thought the environment was tense out there and Lt. Rice made a judgment call that it was appropriate not to seatbelt him and that the new general order that mandates seatbelt use had not reached Lt. Rice. There was no proof presented that Lt. Rice had read that general order. He also said reckless endangerment failed as a matter of law, that because Lt. Rice did not drive the vehicle simply putting him inside without seatbelting was not reckless endangerment. And misconduct in office he felt that the state did not prove their burden that Lt. Rice was corrupt in his duties and failed in his duties. So the state had a significantly high burden of proof here, they failed on all counts yet again."

WJZ's Alex Demetrick was also inside the courtroom as the verdict was read, and said Lt. Rice had very little reaction. 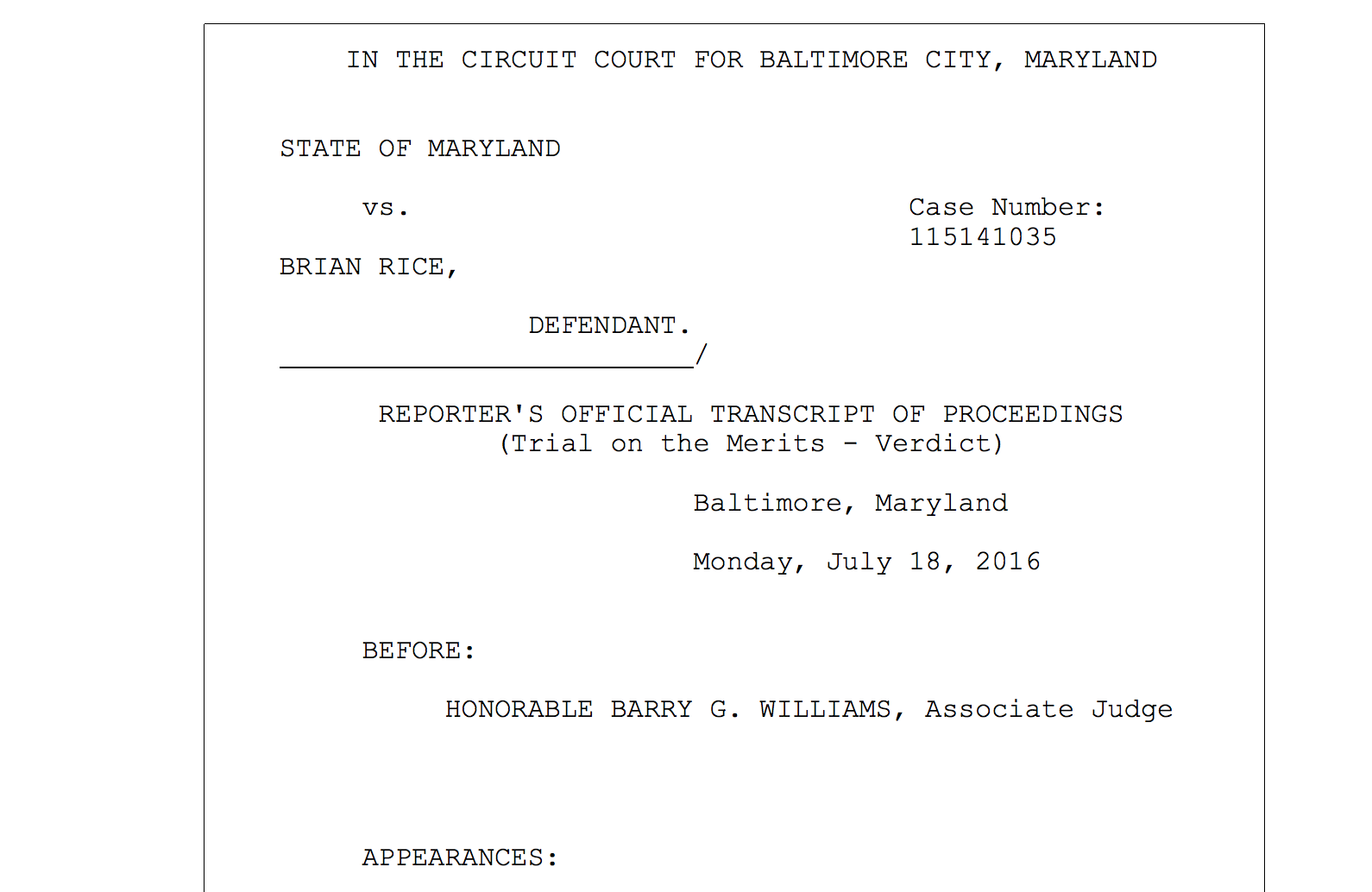 "He sat very still, was very calm. Officer Goodson and Officer Nero were there and they also showed no reaction at all. The judge cleared the bench and he shook hands with his attorneys. Nero, Goodson came up shook hands, he thanked them. A lot of other well-wishers came up and he thanked them. It was very low key, very sedate, it almost seemed like they knew it was gonna be this way. And I thought the most telling thing was the way Janet Bledsoe, the prosecutor, responded. I mean as soon as the judge finished she jumped out of that seat and bolted out of the courtroom. And during the judge's long descriptions of why he came to this verdict, she sat there stretching, yawning, sort of smiling at the co-prosecutor and I don't know, it just seemed like they knew it was gonna come and they couldn't wait for it to be over."

"It became clear throughout the trial that this was an unusual injury and there were competing theories about when during the ride [Gray] sustained this fatal injury and what was interesting at some point the judge said he did not find beyond a reasonable doubt that Lt. Rice had caused the injury," Prof. David Jaros of the University of Baltimore Law School tells WJZ.

"I think what you are seeing is the result of a rushed investigation," Attorney Warren Brown says. "You're witnessing the results of a rush to prosecution."

"If the state had done a thorough investigation in this case and made an intellectually honest decision I think they would have concluded that we don't know what happened in the back of that van," he went on to say.

"I don't think anyone was surprised by the outcome--these were aggressive charges when they were first announced," says Levy. "We saw nothing in any of the trials leading up to this that would compel a finding that these officers had committed criminal acts."

COMMUNITY REACTION TO THE VERDICT

"I already knew," Baltimore resident Perry Bailey Jr. told WJZ after news of the acquittal reached the streets of Baltimore Monday morning. "All six officers that's involved with the Freddie Gray trial, all of them will be found not guilty and the reason why is because the system is biased."

Democratic nominee for Baltimore mayor and current state senator Catherine Pugh released a statement shortly after the verdict came down.

"Today Judge Barry G. Williams found Lt. Brian Rice not guilty on all criminal charges. Now that a verdict has been delivered, the city must continue to exercise patience and respect for the judicial process. Even though there will be disagreements on this outcome, we have an opportunity to continue the public dialogue around police and community interaction – it is not an easy conversation but a necessary one if we are to solve the longstanding problems that exist."

"We of course are very pleased that Judge Williams has found Lt. Rice to be not guilty of all charges," said Ryan. "As anticipated the facts have spoken for themselves, Lt. Rice's actions were found to be reasonable based upon the situation he and the other officers faced. We again strongly urged Mrs. Mosby to stop her malicious prosecution against the remaining three officers. Based upon the evidence in previous trials we are certain the remaining three officers will also be found not guilty."

Ryan says due to the manner in which the first four cases were presented, the citizens of Baltimore should be concerned.

"The manner in which the first four cases were presented, the citizens of Baltimore should be very concerned," said Ryan. "In each of four cases Mrs. Mosby's office has been chastised by the court for their failure to follow proper rules of evidence as required by law. If Mrs. Mosby's office is willing to violate rules in these high-profile cases, we can only imagine what her office is doing in the cases that affect the citizens of Baltimore every day when the media is not around."

Early on in Rice's trial, Judge Williams dropped two charges: an assault charge and one count of misconduct in office.

Today's verdict may have hinged on a simple question: Should the officer have put a seat belt on Freddie Gray?

During closing arguments last week, Judge Williams asked prosecutors if they believed it was a crime not to put a seat belt on Gray.

"So, failure to restrain equals criminal act?" the judge asked.

Michael Schatzow, chief deputy state's attorney, replied that it was, because to leave Gray face down on the floor of the van in handcuffs and leg shackles amounted to Rice not taking reasonable action to ensure his safety. 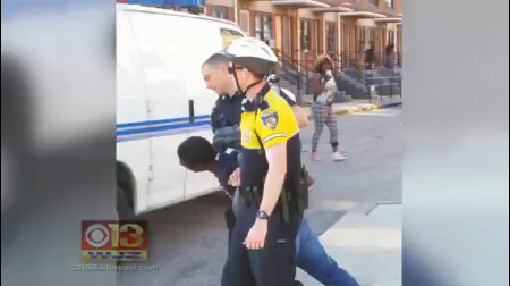 "He should have restrained him," Schatzow said.

Prosecutors said Rice, who is white, was most responsible of the six officers charged for following police procedures to fasten a prisoner in a seat belt, citing his 18 years of experience on the force.

"Clearly Mr. Rice was on notice that he was to seat belt a prisoner," said prosecutor Janice Bledsoe.

Michael Belsky, Rice's attorney, officers could use discretion, if they believe their safety is at risk. He said officers had concerns, because Gray was not cooperative and they weren't sure what onlookers would do if extra time was taken to fasten Gray in the van. 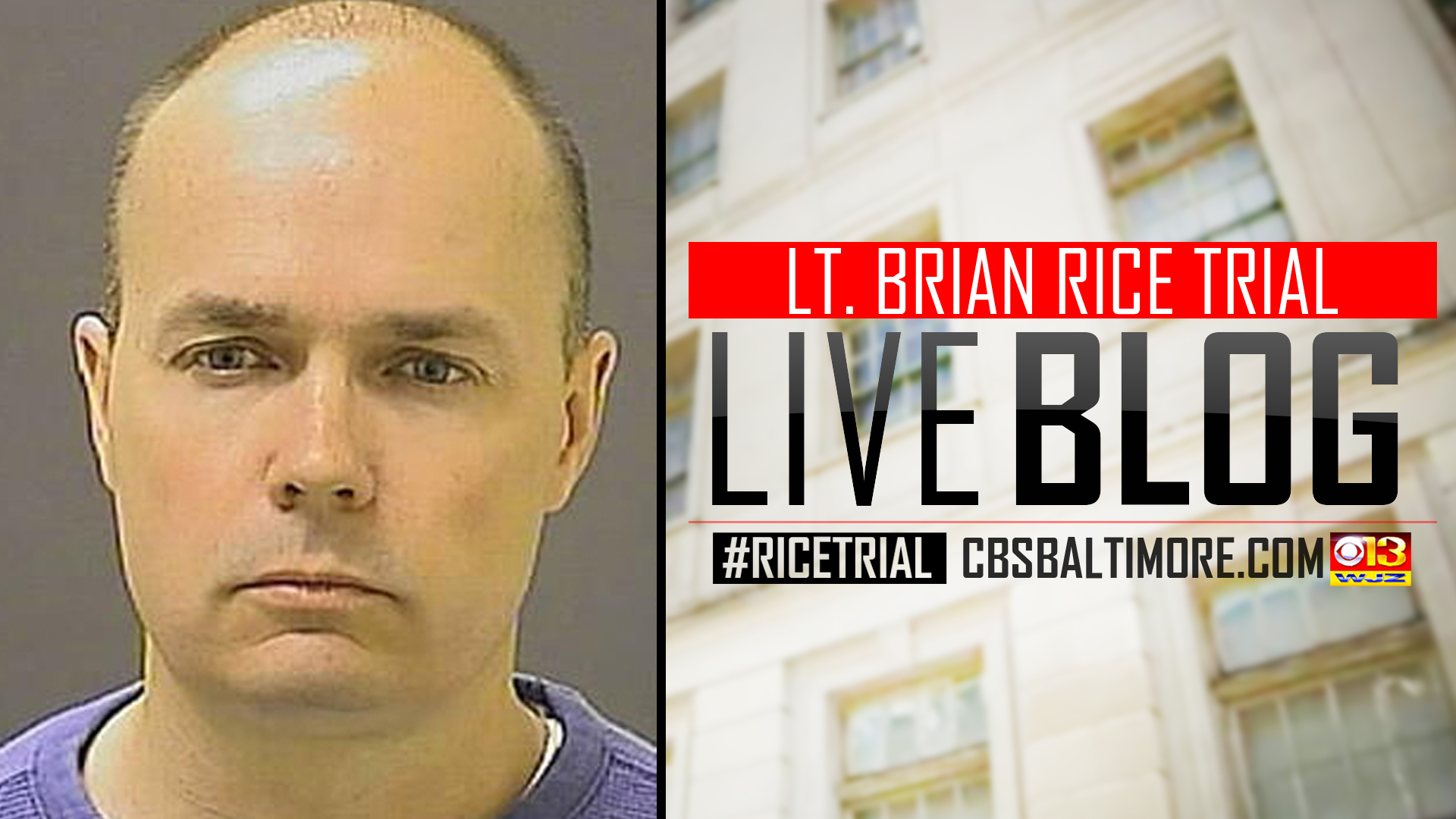 "What he did was professional," Belsky said, adding that "this was not a scene where people are happy or cooperative."

Rice, who was hired by the Baltimore Police Department in 1997 and promoted to lieutenant in 2011, is the fourth officer to be tried. Two other officers, Edward Nero and Caesar Goodson, were also fully acquitted by Judge Williams. The trial for Officer William Porter ended in a hung jury and was ruled a mistrial in December. He will be re-tried later this year.

RELATED: 3 Officers Await Their Fate In Freddie Gray Case, What Are the Charges?

The trial of Officer Garret Miller is set to begin later this month.

The Associated Press contributed to this article.