BALTIMORE (WJZ) -- At least 21 people were taken to area hospitals after an explosion at the Baltimore Gas & Electric building in downtown Baltimore Wednesday morning.

Eyewitnesses told WJZ they heard and felt a large explosion just before 8:30 a.m. Then, they saw scaffolding fall from the building in the 100 block of West Fayette Street. 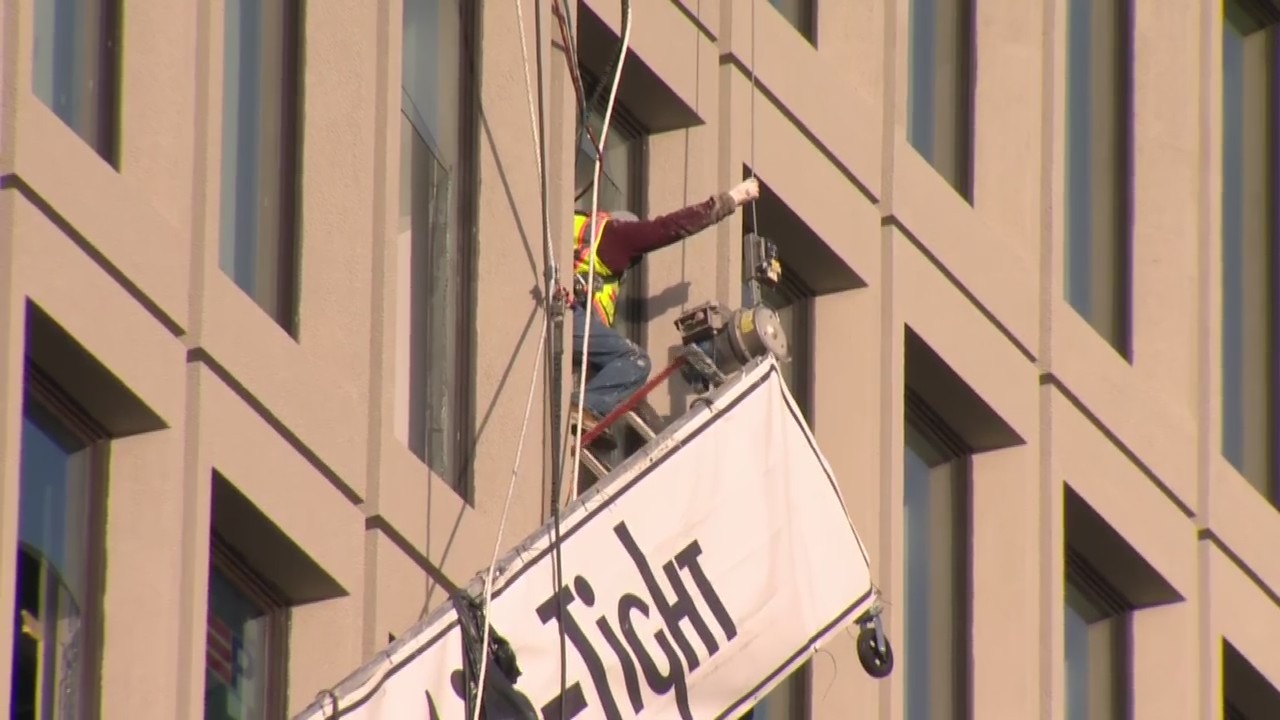 The city's firefighters union said when crews arrived, they "were met with injured people on the ground, injured window washers clinging to their safety lines 12 stories up, and an active fire on the 16th  floor of a hi-rise building."

A total of 23 people were rescued from the building; 21 were taken to area hospitals for treatment. Two people refused treatment. Of those injured, nine are critical and one is in serious condition.

None of those who were injured were BGE employees, the company said.

The two contractors who were cleaning the building windows were left clinging to the remaining scaffolding on the Lexington Street side of the building for about 30 minutes. They were later rescued by the fire department's special operations team, who broke a window on the 10th and 11th floor and pulled the men through.

Crews will repair the damage to the roof and windows to prevent further damage from the weather.

The incident happened on the 16th floor, according to the city firefighters' union.

WJZ saw multiple people being brought out of the building on stretchers. Two of the injured were being treated on the ground for burn-related injuries before they were transported to an area hospital.

Crews still must remove the remaining scaffolding left on the building.

Fire Chief Niles Ford said crews will do this methodically and slowly to make sure the scaffolding is safely removed.

Most of the building was empty due to the upcoming holidays and the pandemic. Firefighters swept the building after the incident to make sure no one else was inside.

WATCH BELOW: Baltimore Officials Give An Update On Explosion At BGE Building

BGE said construction work was underway on the building's air handling and boiler system and that likely caused the incident. The company added it does not believe the explosion was gas-related.

Here's the full statement from BGE:

"On Wednesday, Dec. 23, 2020, a construction related incident occurred at BGE's offices at 2 Center Plaza in downtown Baltimore. The incident appears to be related to construction work that was occurring on the building's air handling and boiler system. The incident was not natural gas related. The building's gas service was not active due to the construction work. 21 construction contractors were treated at area hospitals for non-life threatening injuries. No BGE employees were injured in the incident. The building was largely empty due to the upcoming holidays and remote work during the pandemic. Window washing scaffolding was compromised because of the incident and a window washing crew was pulled to safety by the fire department. Crews are working to further secure and then remove the scaffolding that was compromised as a result of the incident. The building has been inspected and is structurally sound, with repairs planned to secure the damage to the building roof and open windows from potential weather impacts. For any additional information on the people injured, please contact the Baltimore City Fire Department."

When the explosion happened, it blew out some of the windows. An eyewitness told WJZ's Annie Rose Ramos that he was walking in the area when he heard and felt the explosion. He said the ground shook under him and he could see smoke in the air, describing it as feeling like an earthquake.

"I was walking on this side of the street past the Radisson [hotel] and the glass on the building shook and it went 'boom,'" eyewitness Roger Lewis said, "and I didn't know what it was. And we saw debris falling across the street over there."

Lewis said he was one of the first people in the area and tried to call 911.

At first, he wasn't sure what was happening.

Roads remain closed in the area Wednesday night and motorists are being asked to take alternate routes.

It reads in full:

"This morning, an explosion at the BGE Building ignited a fire near the top of the building, trapping people on the surrounding scaffolding. The Baltimore City Fire Department remains on scene as the cause of the explosion is still under investigation.

Thanks to the swift action of our Fire Department, 23 people have been rescued, 21 of whom have been transported to area hospitals. Nine are in critical condition, one is in serious condition, and no deaths have been reported.

I want to thank BCFD and our first responders for their life-saving work today. Without their bravery and quick response, the outcome could have been much worse. As the Fire Department's investigation continues, my office will provide updates."

The investigation continues into the explosion. ATF Baltimore and the state's fire marshal's office are working with Baltimore city fire and police on the incident.

Stay with WJZ on this developing story. To get breaking news alerts, download our app now!
https://twitter.com/AnnieRoseNews