BALTIMORE (WJZ) -- Charges have been dropped against all the officers who still faced trial in connection with the death of 25-year-old Freddie Gray last April.

The prosecutors' decision was announced at a pretrial motions hearing for Officer Garrett Miller, who faced charges of second-degree assault, misconduct in office and reckless endangerment.

Officer William Porter, whose first trial ended in a hung jury in December, had been set to head back to court in September. Officer Alicia White had a court date in October.

The Baltimore Police Department has released a statement saying all six officers will be back on the payroll effective immediately, although they will remain on administrative duty.

Officer Miller and Officer Nero were always on paid administrative duties, while Officer Goodson and Lt. Rice had their pay restored after their acquittals. Sgt. White and Officer Porter had been suspended without pay.

"The tragic death of Mr. Freddy [sic] Gray has stirred many emotions in all of us," Commissioner Kevin Davis wrote. "And while we are all entitled to our own opinions, we are not entitled to our own facts. Our American criminal justice system has run its course, and today's decision by State's Attorney Marilyn Mosby is a wise one that will undoubtedly help Baltimore to continue to heal."

Baltimore City State's Attorney Marilyn Mosby held a news conference around 11 a.m. at Gilmore Homes in West Baltimore, near the location where Freddie Gray was taken into custody.

It was the first time she was able to comment on the cases since Judge Williams issued a gag order barring both prosecutors and the defense from speaking publicly about them.

Chants of "we're with you" broke out before the start of the conference.

"For those that believe that I'm anti-police, it's simply not the case," she began. I'm anti-police brutality. I need not remind you that the only loss and the greatest loss in all of this was that of Freddie Gray's life. For over a year, my office has been forced to remain silent in all six of the cases pertaining to and surrounding the death of Freddie Gray. Despite being physically and professionally threatened, mocked, ridiculed, harassed and even sued, we respected and fulfilled our obligation and dutiful silence in accordance with Judge Barry Williams' gag order, restricting any commentary from the state. In accordance with my oath to pursue justice over conviction, I refuse to allow the grandstanding of some and the hyperbole of others to diminish our resolve to seek justice on behalf of this young man. I was elected the prosecutor. I signed up for this, and I can take it. Because no matter how problematic and troublesome it has been for my office, my prosecutors, my family, and me personally, it pales into comparison to what mothers and fathers all across this country... go through on a daily basis knowing their son's mere decision to run from the police proved to be a lethal one."

Mosby also addressed Gray's mother and stepfather specifically: "Please know that even though the media has made this about everything but the untimely death of your son, my office has never wavered in its commitment to seeking justice on your behalf."

She added that "the prosecution of on-duty police officers in this country is unsurprisingly rare and blatantly fraught with systemic and inherent complications."

"Unlike with other cases where prosecutors work closely with the police to investigate what actually occurred, what we realized very early on in this case was police investigating police, whether they're friends or merely their colleagues, was problematic. There was a reluctance and an obvious bias that was consistently exemplified not by the entire Baltimore police department, but by individuals within the police department in every state of the investigation which became blatantly apparent in the subsequent trials."

RELATED: Mosby Goes 1-On-1 With WJZ About Decision To End Prosecution

She went on to say, that "as a mother, the decision not to proceed on the remaining trials is agonizing." But, "as a chief prosecutor elected by the citizens of Baltimore, I must consider the dismal likelihood of conviction at this point."

"What I ultimately learned throughout this arduous process is that, although no small task, justice is always worth the price paid for its pursuit. You see, in spite of the fact that the verdicts didn't go in our favor, there have been many gains throughout this journey to ensure that what happened to Freddie Gray never happens to another person that comes into contact with police."

Watch her address in its entirety below.

Gray's stepfather announced after the conference that the family stands behind Mosby and her team.

"It was wrong what they did to my son," say Freddie Gray's mom, Gloria Darden. "They lied and I know they lied. I know they killed him.

RELATED: Sources: Mother Of Freddie Gray Tries To Take Her Own Life

At a news conference held around 1 p.m., Lt. Gene Ryan of the Fraternal Order of Police said "justice has been done."

"Our union will continue to support our officers during their administrative hearings and believe these good officers will be returned to fulfilling their duties with the Baltimore City Police Department and serving the citizens of Baltimore City. The men and women of the Baltimore Police Department are extremely dedicated to serving the citizens of Baltimore every day. The comments made today about our officers by Ms. Mosby were outrageous and uncalled for."

RELATED: Freddie Gray: A Timeline From  Arrest To Today

Defense Attorney Ivan Bates, who represents Sgt. Alicia White, also spoke at the FOP conference. All of the six officers charged in the Freddie Gray case and their legal representatives were in attendance, although none of the officers spoke.

"Anytime there's a incident like this, it's always a sad time when a family loses anyone's son. But we also have to recognize that on May 1, 2015, that's when the nightmare began for all these officers. And that is when we saw the State's Attorney for Baltimore City walk down the steps and announce to the world the charges, announce to the world what they felt and what they wanted the evidence to be."

Former Baltimore Police Commissioner Anthony Batts tells our media partner The Baltimore Sun that City State's Attorney Marilyn Mosby is "in over her head" and has added more flaws to a broken justice system by prosecuting innocent officers. 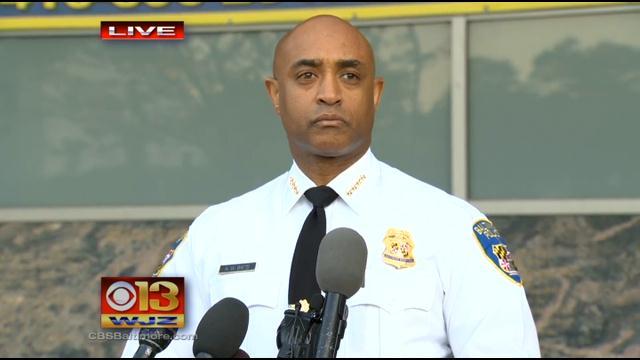 Batts was fired more than a year ago following the Baltimore riots and an alarming spike in violence.

"Today State's Attorney Marilyn Mosby dismissed all criminal charges against the remaining officers related to the death of Freddie Gray," it reads.

"While the State's Attorney's decision brings an end to the criminal proceedings, the Baltimore Police Department will still complete an administrative review of each officer involved. I recognize the emotional nature of this case. The eyes of the nation, indeed the world, have been on Baltimore for a very long time and I thank the citizens of our city for their patience during these trials. Now I ask the citizens to again join me in being patient as the administrative process moves forward."

"The police commissioner has already implemented a new system by which every police officer is notified and must acknowledge that they received the new rules that will come down from our police department, but we need to make people feel safe in our neighborhoods and our communities, so that is about how do you create that respect for the community... so we got a lot of discussions that still need to be had."

From an event in Florida, Republican presidential nominee Donald Trump even reacted to the news.

"I think she ought to prosecute herself," he said of Mosby. "I think it was disgraceful what she did, and the way she did it."

In response to Trump's statements, Mosby says, "Like First Lady Michelle Obama said, when they go low we go high."

She referred to the First Lady's speech Monday night at the Democratic National Convention.

University of Maryland Francis King Carey School of Law professor Douglas Colbert agreed with Mosby that changes have come out of her office's decision to bring charges against the officers.

"I think what the State's Attorney has done is something that very few local prosecutors will ever do in this country, which is to take on a very powerful police union and to bring criminal charges where she believes that the evidence supports the charge," he told WJZ.

"I don't think anyone should have any question that there was evidence here that required the bringing of criminal charges. The fact that they did not meet the judge's burden of proof beyond a reasonable doubt is a very separate burden than whether or not these charges would have been prosecuted or simply dismissed like 98 or 99 percent of people killed in police custody, there are never charges brought. So now we at least can look at what happened to Freddie Gray, we can look at what needs to be done to reform police practices and we can hopefully make sure that no one else suffers the fate that Freddie Gray did."

Colbert adds that he thinks the officers had "very fair trials."

"I only wish that every poor person and working person in our city would be able to get the same type of effective representation and fair trial," he said.

"I think it's a day where no one really celebrates victory," Public Safety Expert Rob Weinhold told WJZ over the phone after the announcement of the dismissal of charges was made.

"You have officers who have been charged, their careers disrupted and possibly destroyed. You have Freddie Gray who is dead. You have a family that's in mourning. You have a city that's been torn apart. I think there are some positives that came from this in terms of policing and community relations and hopefully it's on the uptick at this point. But I've gotta tell you the reaction of the police department, everybody is in the same boat — glad the charges were dropped, wondering why it took so long and that ultimately there are a lot of people who are angry that the charges were brought to begin with in the manner with which they were approached."