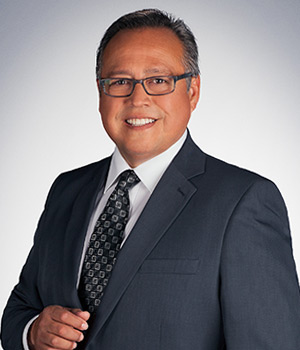 San Jose native Len Ramirez has been a news reporter for KPIX 5 News covering the Santa Clara County/South Bay Region since 1989. Prior to his arrival at KPIX 5, Len was a reporter for KOMO Channel 4 in Seattle, Washington and at KMST Channel 46 in Monterey. Ramirez was also a general assignment reporter for the San Jose newsroom at KSBW Channel 8 in Salinas.

Len received an Emmy award in 2003 for Best Daytime Newscast reporting. He has also been the recipient of two Best News Story awards from the Radio and Television News Directors Association in 1985 and 1986. He also has three other Emmy nominations for breaking and investigative news. During his career, Len has covered several major national and international stories including the Mexico City earthquake, the Los Angeles riots, and the OJ Simpson murder trial. Len also specializes in covering Santa Clara County for KPIX 5.

Len often volunteers his time to encourage students to complete their education and is a frequent guest speaker at San Jose's Latino Role Model Conference. He is also a member of the National Association of Hispanic Journalists and the California Chicano News Media Association.

Len graduated from San Jose State University with a degree in journalism in 1983.

He lives in San Jose with his wife Julie, and their three children.