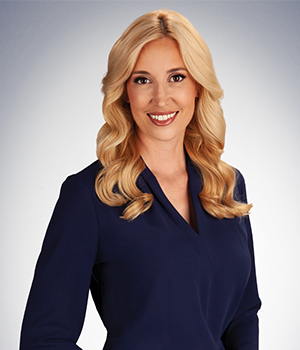 Katie Nielsen is an award-winning reporter who has spent more than 10 years sharing people's stories. She joined KPIX in the summer of 2017, and just a few months later, found herself covering the Wine Country Wildfires.

Katie was one of the first reporters to arrive in Santa Rosa when the fires started and provided constant updates from the fire lines. The stories of bravery and tragedy she filed earned her two national journalism awards: The Society of Professional Journalists National Sigma Delta Chi Award for Breaking News and the National Headliner Award for Breaking News.

In 2018, Katie provided live reports from almost a dozen major wildfires across Northern California, including the Camp Fire in Paradise and the Carr Fire in Redding. Her award-winning coverage of the Carr Fire earned her the National Headliner Award for Breaking News for the second time in as many years, an unprecedented honor.

A native of Southern California, Katie is thrilled to be back in the Golden State. She has worked at TV stations in New York, Arkansas, Missouri and Nevada before returning to the West coast.

Most recently, Katie reported for Comcast Sports Bay Area, focusing on horse racing and baseball. A proud graduate of the Missouri School of Journalism at UM-Columbia, she also holds a Masters of Jurisprudence from the Loyola University Chicago School of Law.

When she's not chasing news, Katie is out running with her dog, Chloe, golfing, or skiing. She's also a competitive equestrian with her show jumping horse, Moose.