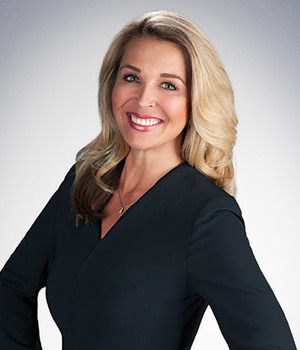 Emmy award winning reporter and Bay Area native Juliette Goodrich joined KPIX 5 in 1997 and has performed a variety of anchoring and reporting assignments during her time with the station.  She is currently the weekend nighttime anchor.

Juliette graduated from U.C. Davis with a degree in Communications and was awarded the Kelly Broadcasting Scholarship her senior year.  She started her broadcasting career reporting for Channel 30 in her hometown of Pleasanton during the early 90s and gained additional local and national experience reporting and anchoring for news stations in the Redding, Chico and Sacramento television markets.

In 2004, Juliette was awarded the APTRA "Excellence in Spot News Coverage" for her reports on the anchor desk during the Oakland Super Bowl Riots. In 2005, she was named Reporter of the Year by The Women of Radio and Television Association. In 2006, Juliette received an Emmy for Best Anchor and in 2007,  she was awarded another Emmy for Best Newscast for the 5pm news on KPIX 5.

In 2012 she was awarded a Nor Cal RTNDA award for her multi-part series: "Hunger Challenge…Living on Food Stamp Budget for a Week."

In 2014  Juliette received her fifth Emmy for her team coverage on Batkid.

Juliette was inspired to write a children's book after she emceed the 100th birthday celebration of the Centennial Light. It is the world's longest burning lightbulb.  It is located at Fire Station 6 in Livermore, California.  The book is called "The Little Light Shines Bright."   Proceeds from the book benefit local reading and writing programs. You can learn more about the lightbulb and see what it looks like from a bulbcam operating 24 hours a day at www.centennialbulb.org.  Juliette has also written four other children's books with proceeds going to local reading programs.  She has written "The Train of Lights, "   "I'm Special because I Smile", (inspired by her work with Special Olympics),  and "Paws Goes to the Library."

Juliette is involved in many community organizations including the Alisa Ann Ruch Annual Burn Relay to support burn survivors in the Bay area, the Northern California Special Olympics and the American Red Cross. She has also competed in several triathlons for the See Jane Run Breast Cancer Fund. Juliette and her husband live in the East Bay with their three children.  Juliette and her three children trained for three years together to earn their  Black Belts in Tae Kwon Do.  They continue to train for their second degree.