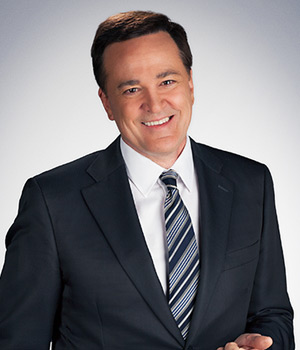 Brian Hackney has won 18 Emmy awards for everything from best news anchor to best documentary to best news reporting to best weather anchor to best writing, a range of ability that the National Academy of Television Arts and Sciences characterized as "an unprecedented show of versatility."

In the summer of 2013, he won five Emmy awards, representing more than half the total awards won by the station, and more than any other single individual.

He also won two National Associated Press Mark Twain awards for Best Documentary ("Hitchcock: Step By Step"), and Best Weathercast in 2013, and shared the Peabody award for his contributions to KGO's legendary coverage of the Loma Prieta earthquake.

Brian has also appeared nationally on Good Morning America, co-hosting with Charlie Gibson and Joan Lunden,  and the CBS Evening News, providing live reports in his role as meteorologist.  He co-hosted PBS's longest-running family science program, the national Emmy award-winning Newton's Apple, and frequently hosts forums at the Commonwealth Club, broadcast nationally on NPR.  He is also Director of the College of Science & Math board at Cal Poly San Luis Obispo, where he was honored as Outstanding Alumnus in 2013—the highest honor Cal Poly can bestow on a graduate.

A native of Hollister, California (home of the fastest-creeping earthquake fault known), Hackney earned two degrees at Cal Poly in Physics and Electronic Engineering, working briefly as an associate design engineer at Raytheon Electromagnetic Systems Division in Santa Barbara. He left to pursue a career in broadcast journalism as a science editor, meteorologist, and news anchor, first at KSBY in San Luis Obispo, then at the NBC affiliate in San Diego, and finally at the ABC, NBC, and CBS-affiliated stations in San Francisco. He's reported everywhere from Tierra del Fuego in Chile to Switzerland, and was anchoring the news at the moment of the September 11th terror attacks in 2001.

In the course of his career he's interviewed everyone from Carl Sagan to Edward Teller to Paul McCartney. Presently, Brian anchors both the news and weather at the CBS owned station in San Francisco.