Cal Fire said as of Saturday evening, the fire had burned 1,050 acres, down from the original estimate due to better mapping. They said containment had grown to 20%.

"The fire lined up with the wind and the terrain and that gave the fire a lot of energy to make a big run," said Cecile Juliette, a spokesperson for the California Department of Forestry and Fire Protection.

The National Weather Service issued high wind warnings and advisories throughout Northern California. A warning for the North Bay mountains was extended to 4 p.m. Saturday. Winds topping 70 mph howled over Mount Diablo and a gust in the Healdsburg Hills was clocked at 96 mph and 94 mph at the nearby Pine Flat Road weather station.

It was unclear what caused the fire.

Fire officials said it's uncommon to have a fire of this size burning in the winter. They said this is another reminder California's fire season is year-round.

"The winds absolutely played a huge part in what happened last night. We had wind gusts of up to 50 miles an hour," said Juliette. "Everything is just so dry that it just really allowed this fire to spread very rapidly in the middle of winter."

The National Weather Service said while Monterey County had a good amount of rain from late October to December, there was no measurable rain in January. They added the area burning had little or no fire history.

"The timing is quite unique because in January, we generally don't have a lot of fires," said Dr. Craig Clements, Director of the Wildfire Research Center at San Jose State.

"Given the fact that we haven't had rain at all in January and we had a big off-shore wind event, these are the conditions that lead to wildfires typically in the Fall, not in January. So it's just something that is quite surprising," said Dr. Clements.

Even thought there was a lot of rain late last year, Dr. Clements said several years of extreme drought mean there's still a lot of dry fuel out there.

"If we pick up our precipitation, our snowpack in the Sierra in February and March, then we might get back to normal," said Dr. Clements.

"It no longer makes sense to refer to fire season as something that just happens three months out of the year. It's a year-round thing in California now and we anticipate that it could get worse," said Juliette.

Cal Fire said because of the constant threat, people who live in fire-prone areas should stay vigilant and be ready to evacuate at all times.

The blustery conditions quickly spread the two wildfires. Cal Fire officials reported that crews were responding to a wildfire in the Palo Colorado Canyon north of Big Sur at around 7:30 p.m. Friday. 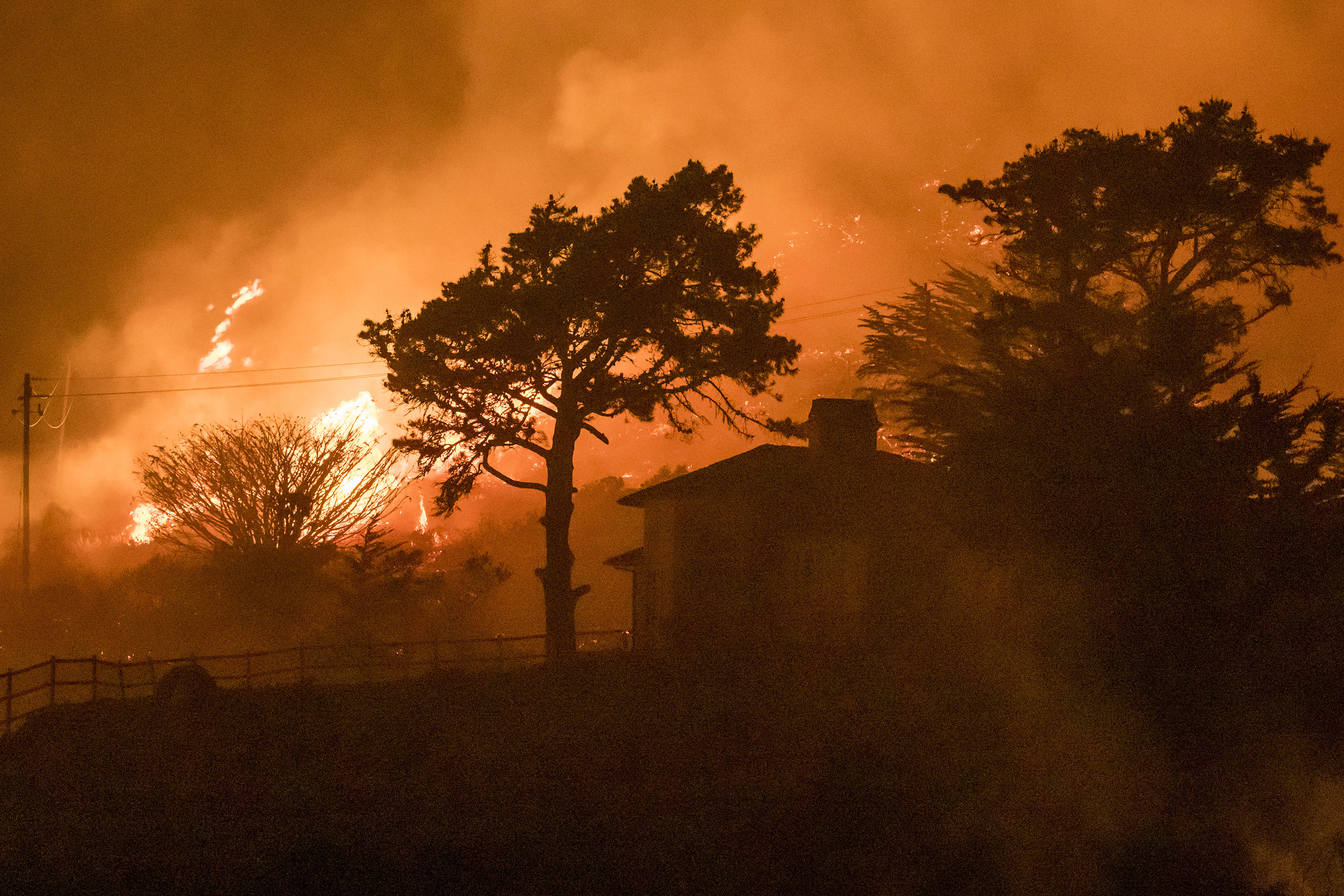 The flames spread on the hillsides still tinder-dry from months of drought conditions. Rains in late December had eased through conditions but January has been extremely dry again.

"Fire has remained stubbornly active overnight," National Weather Service forecasters said. "Pictures on social media suggest some pretty surreal fire behavior given the wet Oct and Dec that was observed across the region with multiple atmospheric river events. Looking at historical fire data it appears the fire is burning south of Palo Colorado and towards Bixby Creek along Long Ridge in an area with little or no fire history."

"Anecdotally, it seems as though the long-term drought is acting like a chronic illness where even recent rains and cold winter weather isn`t helping to keep fires from developing."

Wildfires this time of year have been a rarity.

"It's unusual to have fire this size here on the coast at the end of January," Juliette said. "The fact that we had a fire this size is of great concern."

By 11 p.m. mandatory evacuation orders had been issued with a American Red Cross shelter being set up at Carmel Middle School. Residents quickly fled on roadways covered by clouds of blowing embers. The flames jumped Highway 1, burning below the famed Bixby Bridge and were visible from as far away as the famed Pebble Beach golf links. 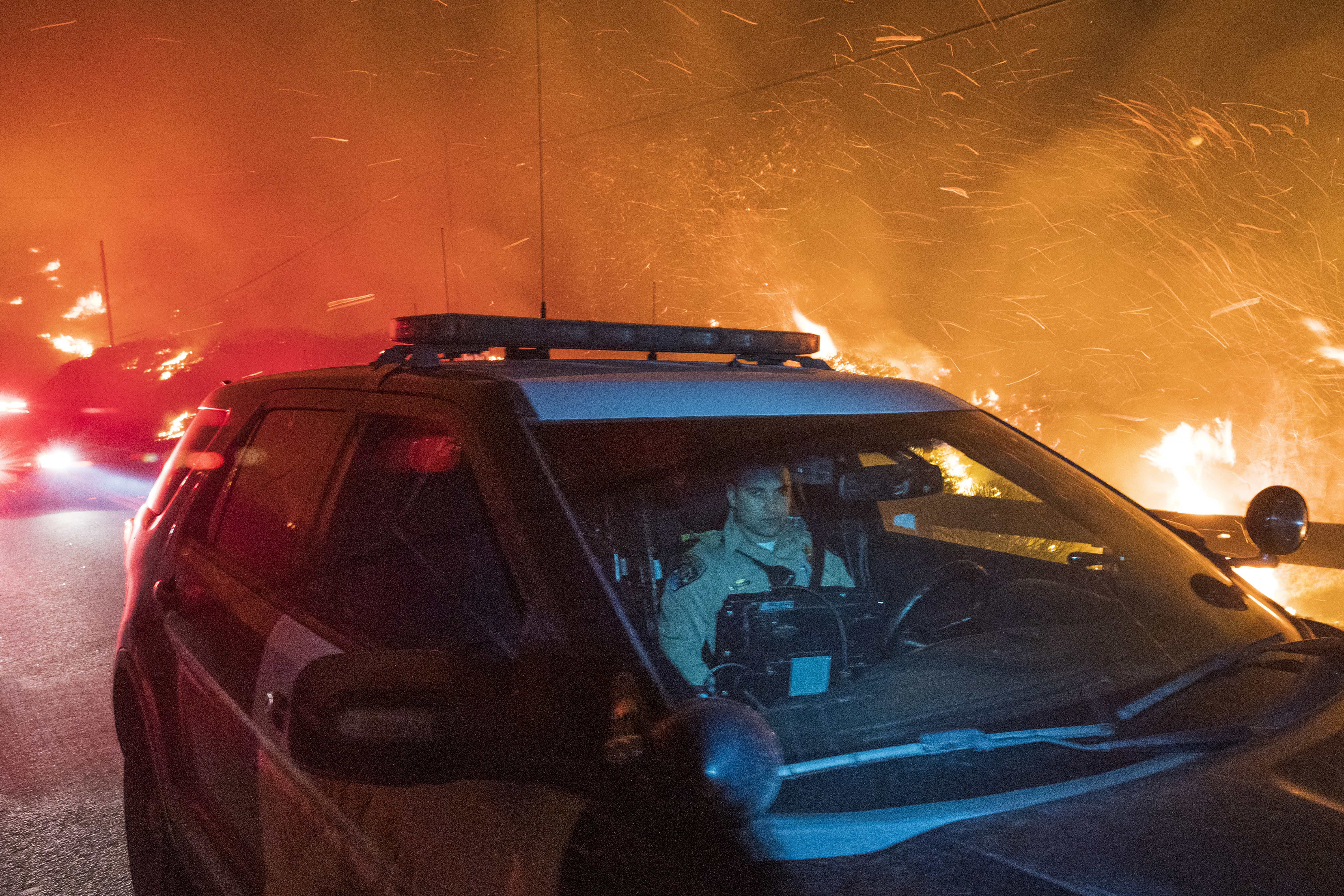 The concrete bridge spans the deep and wild canyon along the highway and has been the backdrop of many car commercials, movies and TV shows, most recently the HBO drama "Big Little Lies."

Authorities made contact with about 500 residents, urging them to evacuate the sparsely populated area between Carmel and Big Sur. More than 250 firefighters from multiple agencies and volunteer groups, aided by water-dropping aircraft, contained about 20% of the blaze by Saturday evening.

"The winds have died down and that has worked in our favor," Juliette said Saturday evening.

The California Highway Patrol closed Highway 1 at Rio Road just outside of Carmel-by-the-Sea due to the fire. From south of the fire, Highway 1 was closed at Andrew Molera State Park, just north of Big Sur.

The area affected by the evacuations was for residents living along Palo Colorado Road from Highway 1 east to the Rocky Creek Bridge and Bixby Creek Road. It was not immediately known how many homes were being threatened in the rural area.

"Looking back at last evening the fire appeared to start during the peak offshore winds and very low humidity," the weather service said. "The strongest offshore winds have now ended in the vicinity of the Colorado Fire. As of 3 a.m., the current weather is showing relative humidity values 42-52% with southerly winds around 5 mph. These light south winds will represent a potential change that residents and firefighters should monitor today." 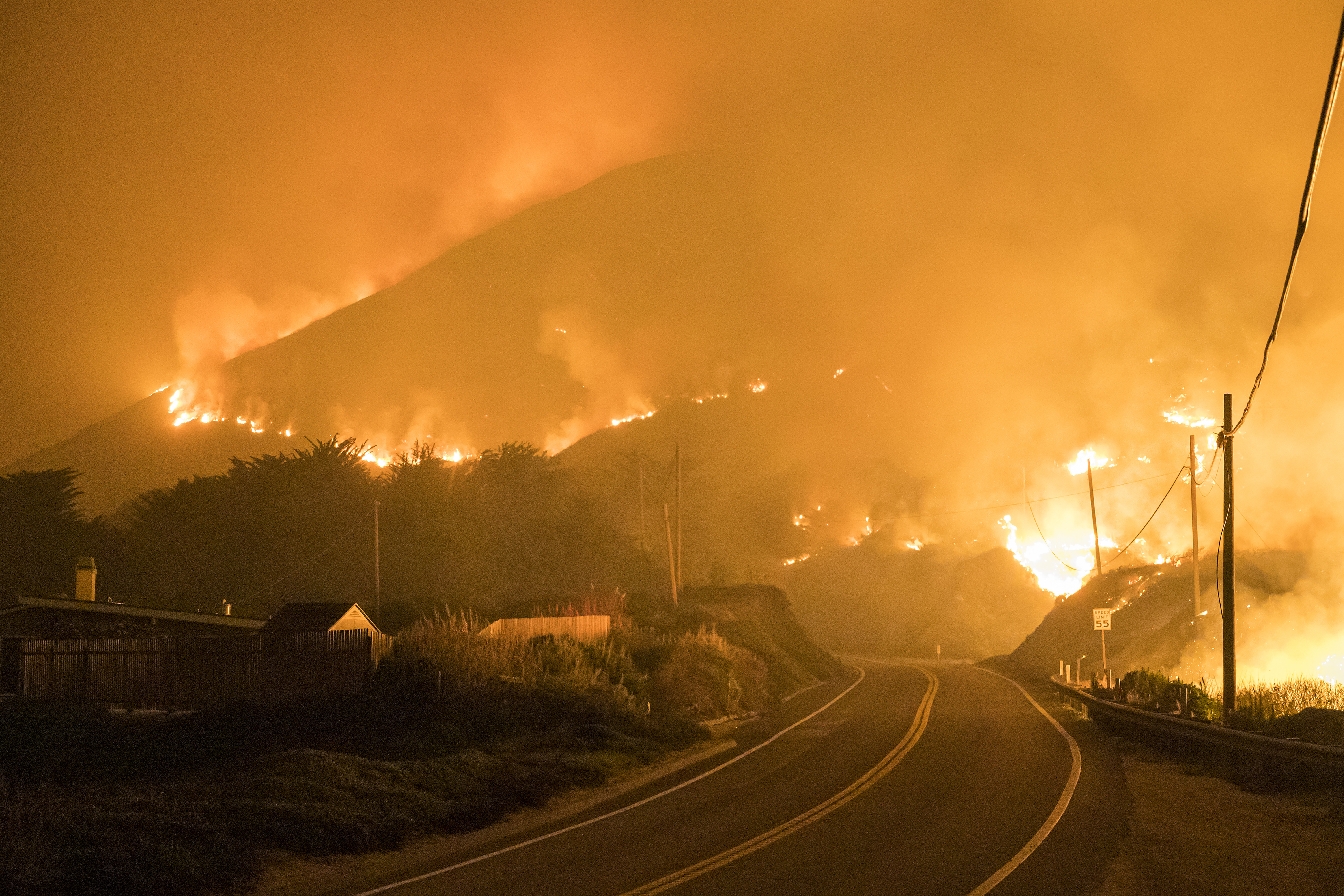 Video showed a wall of flames roaring across the picturesque hillsides while Cal Fire deployed assets from as far away as the Bay Area. Cal Fire's CZU unit in San Mateo County sent 4 fire engines to help battle the blaze.

Meanwhile, a second wind-swept fire erupted in the hills near Geysers Peak Road after midnight. It grew to about 5 acres before responding crews were able to get a handle on the blaze.

Winds were whipping through the region at the time of the fire. A gust in the Healdsburg Hills was clocked at 96 mph and 94 mph at the nearby Pine Flat Road weather station.