CASTRO VALLEY (CBS SF) -- Work crews returned to Castro Valley's Heyer Ave. Monday to continue cleaning up debris scattered all over the street in the wake of a weekend wind storm that roared though the neighborhood packing 50 mph-plus gusts and toppling tree after tree.

The calm of Monday morning was a dramatic change from Sunday when Nature's blast was just too much for many of the eucalyptus trees that lined the street. As many as 15 toppled in the windy conditions with branches and limbs falling like rain.

Joe and Julie Colburn live there and on Sunday night as darkness fell, they surveyed the damage.

"It was howling pretty bad, especially through our backyard," Julie Colburn told KPIX 5. "I heard it this morning when I first woke up and it just got worse throughout the day."

One toppled tree took out the power lines. Another slammed into parked cars.

"It (one of the toppled trees) fell across the road, took out the power lines, and there was a car that was hit by a tree earlier," said Ron Tilkington, who lives in the neighborhood. "I guess it got hit by the second tree also - not that car's day."

The Colburns were thinking about getting a hotel for the night.

"Obviously without the lights being on and the power and everything, we're just not sure what's going to happen," Joe Colburn told KPIX 5. "So we can't see anything, we don't know if more trees might fall over, that's again, the safety is the biggest concern."

Katrina Opp was doing her homework when the first tree toppled.

"I was sitting in the living room and I heard a noise and I called it - I said a tree fell and my dad was like really?," she told KPIX 5. "So we went outside and then the tree had just fallen."

The scene on Heyer Ave. was repeated elsewhere across the Bay Area. A tree toppled across the road near El Camino Del Mar and 34th Ave San Francisco. 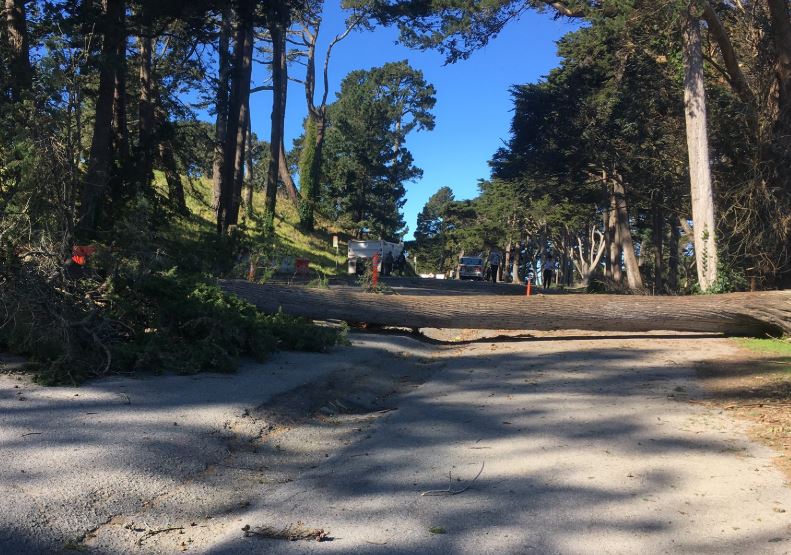 Several trees toppled on Skyline Blvd in the Oakland Hills. One crashed into a home near Skyline and Redwood Rd. Fortunately, a woman inside escaped injury but was shaken up.

Another massive oak tree crashed into a home and crushed two vans and damaged other cars on Riverside Dr. in Sonoma Valley. Two adults and two kids in the house at the time were not injured. 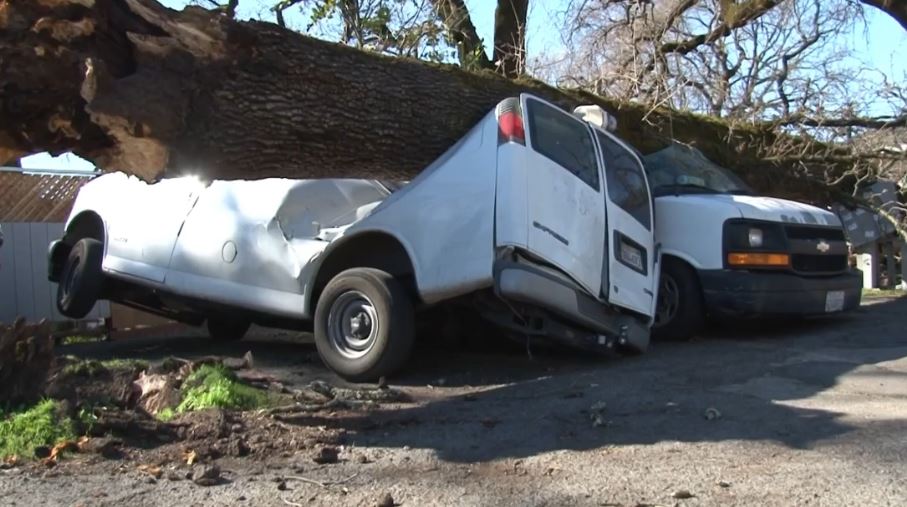 Trees were also blown down on El Camino Real in Belmont, Balboa Drive in Oakland's Montclair District, on Clarewood at Harbor Drive in Oakland's upper Rockridge area, all across Alameda as well in Concord, Fremont and rural Santa Rosa.