One of the world's most prestigious research and teaching institutions, Stanford University is a wonderful place to visit. But with the main campus covering more than 1,700 acres, it helps to know what the best sites are to see. By using the campus map or a suggested 2.4-mile trek, a walking tour of Stanford University can be easily completed in less than half a day. The best time to visit the university campus is on weekends when there isn't a home football game, with many free parking areas available.

The tour begins at the Cantor Arts Center, not far from the main entrance where parking is free after 4 p.m. and on weekends. Founded in 1891, the Cantor Arts Center was established as part of Leland Stanford Jr. University, in memory of Jane and Leland Stanford's only child, who died of typhoid fever in 1884. Once the world's largest private-owned museum building, the museum was renamed the Iris & B. Gerald Cantor Center for Visual Arts in 1999, but it is also known as the Stanford Museum. The admission-free museum is acclaimed for having one of the world's largest Auguste Rodin collections outside of Paris, including Rodin's most famous sculpture, "The Thinker," and the Rodin Sculpture Garden. A new museum featuring one of the world's greatest collections of modern and contemporary American, the Anderson Collection at Stanford University, recently opened adjacent to the Cantor Arts Center.

Located in the center of the Stanford University campus, the Stanford Memorial Church was built as a memorial to Leland Stanford by his wife, Jane. Known as "the University's architectural crown jewel," the church was dedicated in 1903 and at the time, was one of the earliest interdenominational churches on the West Coast and continues to retain its nonsectarian prominence today, with regular multi-faith services conducted at the church. The church is open to all students and visitors regardless of religious or non-religious tradition and cultural background. A self-guided tour brochure of Stanford Memorial Church is available online through the Stanford Office of Religious Life. 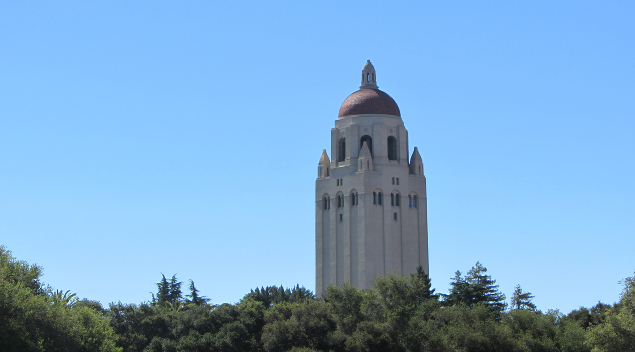 Completed in 1941 in celebration of the Stanford University's 50th anniversary, Hoover Tower is the most iconic and recognizable structure on campus. Part of the prestigious Hoover Institution, the tower houses the center's Library and Archives, founded by Herbert Hoover, who was a Stanford student before becoming the 31st President of the U.S. in 1929. The observation deck on the 14th floor of the 285-foot Hoover Tower is open to the public and provides visitors with spectacular views of the Stanford campus and on clear days, other parts of the Bay Area. Adjacent to the tower is the Herbert Hoover Exhibit Pavilion, also open to the public and featuring temporary exhibitions showcasing priceless artifacts from the Hoover Library and Archives.

First opened in 1969, Maples Pavilion is the home venue for the Stanford Cardinal's men's and women's basketball and women's volleyball. Named after the principal donor, Roscoe Maples, a successful businessman who attended Stanford University in 1904, the multi-purpose facility has 7,232 seats and has been host to many prominent events, including Cardinal teams that have won some of Stanford's 104 Division I NCAA championships. The Stanford Cardinal men's volleyball team and men's and women's gymnastics also host home events at Maples Pavilion. Tickets to any of the sporting events held at Maples Pavilion may be purchased online through Go Stanford. Just past the pavilion and Arrillaga Sports Center is Taube Family Tennis Stadium with Avery Aquatic Center and Klein Field at Sunken Diamond nearby.

Originally opened in 1921, Stanford Stadium is the home field for the Stanford Cardinal football team and has been the host to many historic events, including Herbert Hoover's 1928 presidential nomination acceptance speech, Olympic competitions, Super Bowl XIX in 1985 and FIFA World Cup soccer matches. After the 2005 football season, the old stadium was demolished and replaced in time for the following seasons with a new, $100 million state-of-the-art stadium featuring more than 50,0000 seats, luxury suites, director's level seats and two high-resolution video scoreboards. Stanford Stadium is only accessible to the public on game days and opens approximately 90 minutes prior to kickoff. Tickets to home games may be purchased online through Go Stanford.

Related: Best Fall Sporting Events In The Bay Area
Randy Yagi is a freelance writer covering all things San Francisco. In 2012, he was awarded a Media Fellowship from Stanford University. His work can be found on Examiner.com Examiner.com.