OAKLAND (CBS SF) -- A violent confrontation between Oakland police and suspects who were attempting to rob a marijuana grow operation late Tuesday night ended with multiple officers being injured and an officer-involved shooting.

While the details were still sparse early Wednesday, Oakland police said officers responded to a report of a burglary in progress at a marijuana grow at around 10:15 p.m. in the 1400 block of 92nd Ave.

Upon arrival, officers attempted to detain the suspects, but there was a violent confrontation. Multiple officers suffered injuries and an officer fired their weapon. Calls also went out for mutual aid from neighboring jurisdictions.

There was no information on the condition of the suspects or if any arrests had been made. Other details were to be released later in the day.

The East Bay Times was reporting that officers responded to a hit from ShotSpotter of gunfire near 92nd Avenue and Holly St. at 10:30 p.m. Arriving officers discovered two shooting victims in the street. They were taken to a local hospital for treatment and their condition was not known early Wednesday.

The confrontation came during a very busy night and overnight for Oakland police. Officers were investigating scattered reports of looting including a pot dispensary rammed by a vehicle and ransacked and unrelated shootings that left at least six injured.

At around midnight, a caravan of cars arrived at a shopping mall located at 3000 E 9th street in Oakland's Fruitvale District. They targeted a Starbucks that had its windows smashed and the inside of the store ransacked. 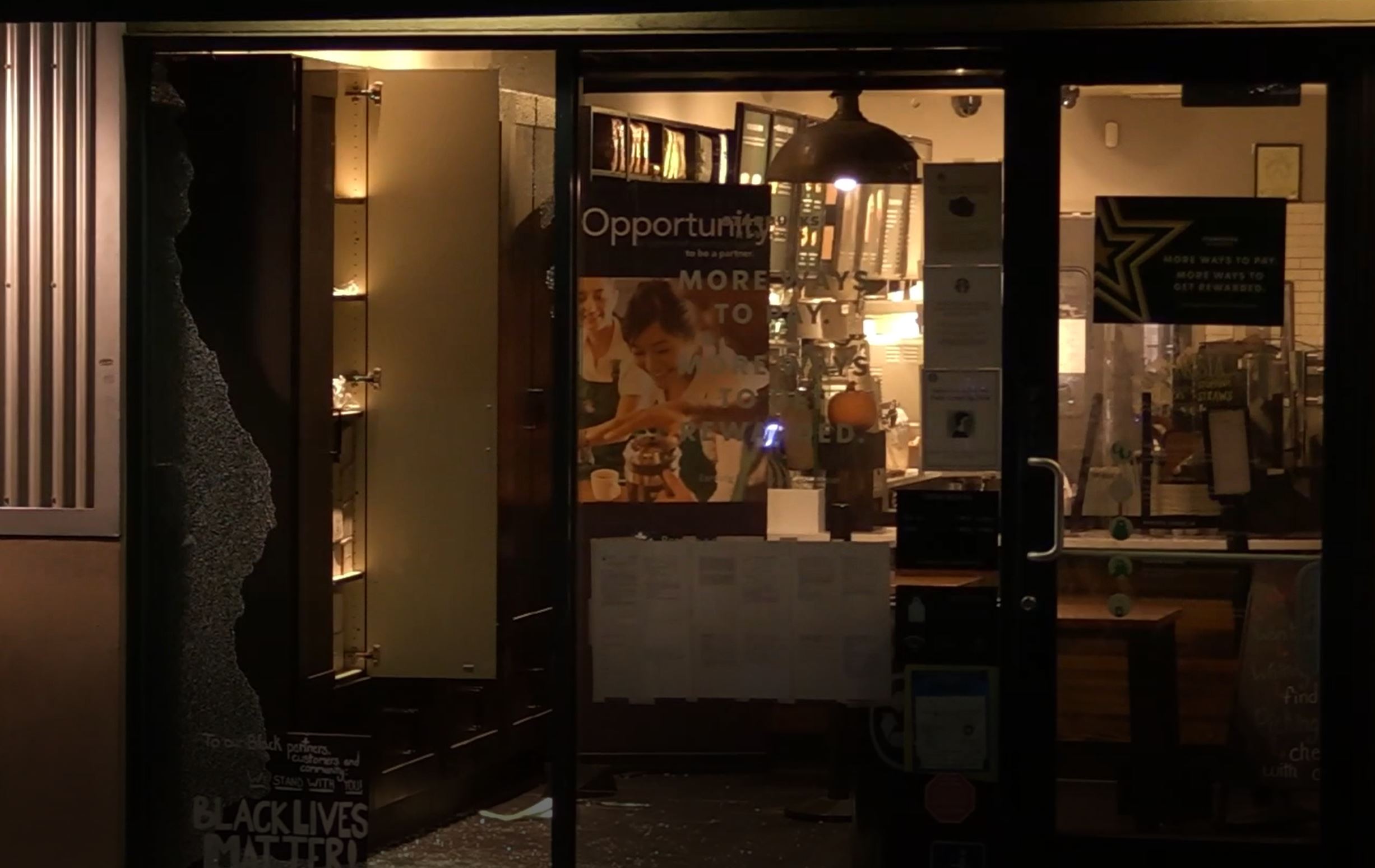 Then at 1:30 a.m. a CRV was smashed through the metal gate in front of the Only Good Weed dispensary at 2400 High St. The inside of the dispensary was ransacked and merchandise stolen. The thieves then fled, leaving behind the damaged CRV. Police said they were investigating the incident as a burglary.

In a second incident targeting a marijuana business, two security guards -- one 52 and the other 40 -- were shot at about 11:11 p.m. Tuesday during an attempted robbery in the 8400 block of Baldwin Street. Their conditions were not available. No arrests have been made in that case.

According to the East Bay Times, there were also several other shootings overnight. 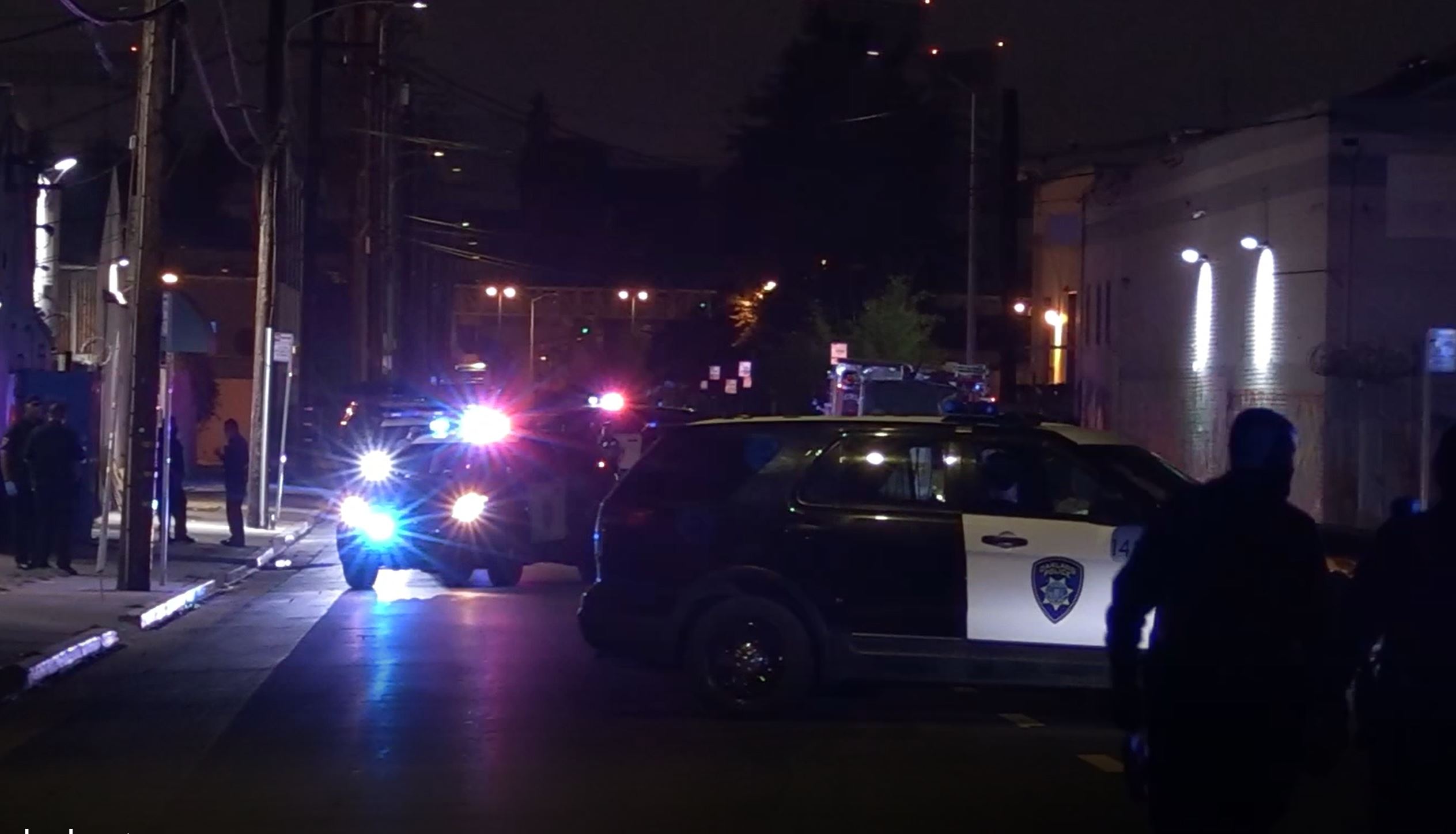 There were also two late Tuesday night shootings including an incident that took place around 11 p.m. in East Oakland. A man suffered an arm wound and was taken to a local hospital for treatment. No other details have been released.

Then just before midnight, three people were wounded in a shooting at Filbert and 10th streets in West Oakland. The East Bay Times reported that none of the injuries appeared to be life threatening.

There has been a deadly surge of violence on Oakland's streets over the last several months. On Monday night, a 22-year-old man was found fatally shot in an East Oakland neighborhood.

Homicide investigators said officers responded to a ShotSpotter activation in the 900 block of 75th Ave. at about 9:30 p.m. Upon arrival, the officers found a young man inside a vehicle with a gunshot wound. He was declared dead at the scene.

Police have not release any information on a suspect or suspects or a possible motive behind the shooting, which remained under investigation.

The victim's name was being withheld pending notification of the next of kin. Anyone with information is asked to contact the Homicide Section at (510) 238-3821 or the TIP LINE at 238-7950.

Oakland police tweeted that there has been 171 ShotSpotter activations reported from 10/26-11/1. ShotSpotter Activations are up 60% citywide over last year.

Meanwhile, the East Bay Times reported that Oakland police have investigated 93 homicides this year -- 87 of those classified as murders. In 2019, police investigated 78 homicides in the city.

The dead comes after a particularly violent span from Oct.26-Nov.1 when six victims lost their lives to violence. Police tweeted last week that assaults with firearms were up 55% year-to-date.