BERKELEY (CBS SF) -- Workers chiseled off the Boalt name from the University of California's law school building early Thursday morning -- a first of its kind denaming process on the Berkeley campus history.

The debate over the naming rights of the building began three years ago after Berkeley lecturer Charles Reichmann discovered the racist writings authored by Oakland attorney John Boalt -- words that catalyzed support for passage of the infamous Chinese Exclusion Act of 1882. 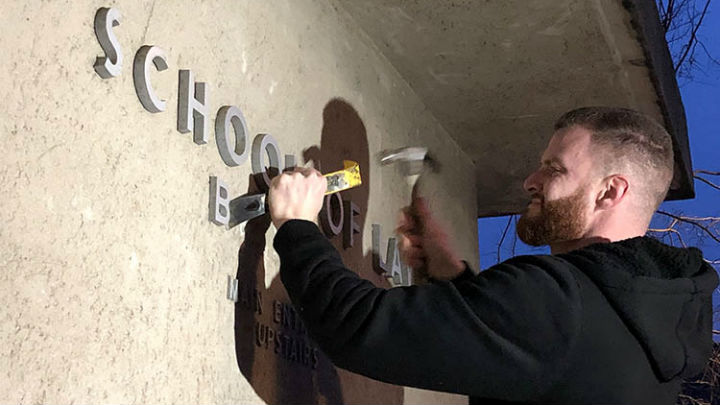 "Removing the Boalt name from our campus — as well as acknowledging our historical ties to John Boalt — will help Berkeley recognize a troubled part of our history, while better supporting the diverse membership of today's academic community," Chancellor Carol Christ wrote in a letter to UC president Janet Napolitano.

Boalt Hall - home of the law school was built in 1911 -- and actually named after John Boalt in respect for his wife, Elizabeth, who had made a large contribution to the university after he died in 1901.

John Boalt didn't attend the UC-Berkeley law school or did he ever teach there.

Last October, the committee's members overwhelming voted in favor of removing the Boalt from the building. The committee's decision, however, had to get the approval from the UC administration.

"It's incredibly important to confront racist symbols, like John Boalt's name on a building, because these symbols act to reinforce the history of white supremacy in our institutions," said Berkeley professor Paul Fine, co-chair of the committee, in a university press release.

There has yet to be a decision over what the new name of the building should become.