Worth noting: Pew discovered during its survey that 74 percent of adults are online (the survey is comprised of people 18 and older). That means that about 6 percent of the entire adult population in the United States users Twitter. 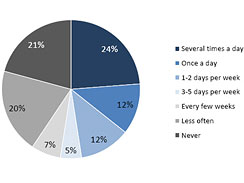 The chart above shows how often Twitter users check for material posted by others, according to a survey conducted by the Pew Research Center's Internet & American Life Project. The survery was released Thursday, Dec. 9, 2010. (Pew Research Center)

Some of the information in the 19-page report breaks down like this:

• Women use Twitter more than men do, with 10 percent of women using the service compared to 7 percent of men.
• Eighteen percent of users are Hispanic, 13 percent black, 5 percent white.
• People who tweet are more likely to be urban and have had some college education.

A statistic that should surprise no one is that the majority of people are on Twitter are between the ages of 18 and 29. The older you get, the less likely you are to use the service.

According to the report, "One-quarter of Twitter users check in multiple times per day for tweets from others, while one in five never check for new material on the site." (For a chart of how that breaks down, see the image on the left side of the page.)

More specifically, the report states that Twitter users more or less use the service for…anything and everything. In Pew's words, "Twitter users post a wide range of content to the site." Stats-wise, here's some of the more interesting stuff:

• Nearly three-quarters of Twitter users (72 percent) say "they post updates related to their personal life, activities or interests. A total of one in five Twitter users (19 percent) say they post personal updates once a day or more.
• More than one-half (55 percent) of users post links to news stories. A little more than 10 percent do it at least once a day.
• Four in 10 users share photos with others.
• About one in four users (24 percent) tweet their location but only 7 percent of users do that daily.

The report contains detailed examples and explanations of the questions asked of users. Pew thoroughly explains how it arrived at the statistics. (There are some very serious and complicated-looking mathematical formulas sprinkled within the report's pages.)

And the reason for the study? As Pew says, "The message service Twitter launched on July 15, 2006, and now claims tens of millions of users worldwide. It is one of the most popular online activities among tech enthusiasts and has become a widely used tool among analysts to study the conversations and interests of users, buzz about news, products or services, and announcements by commercial, non-profit, and government organizations."

(© 2010 CBS Broadcasting Inc. All Rights Reserved. This material may not be published, broadcast, rewritten, or redistributed.)