ALEUTIAN ISLANDS (CBS SF) -- A massive 7.9 revised magnitude earthquake off Alaska's remote Aleutian Islands has triggered a regional tsunami, with reports of water already leaving some harbors including Adak Harbor, as the waves begin to come in.

California's coastline is highlighted in the National Weather Service tsunami energy propagation map, however, no warning has been issued for the West Coast.

Seismologist David Oppenheimer stationed in Menlo Park said, "The message is simple: wait for the tsunami warning to say what's going on, if there is a warning, NOAA will update their advisory."

He added, "There's report of a tsunami in Alaska, but it's small. Had the earthquake been shallow, there could have been big waves and more displacement. NOAA is watching for tide gauges."

With the small amount of sea floor movement, Oppenheimer was clear, "There's nothing to be concerned about on the California coast."

Additional aftershocks as large as magnitude 6.2 continue to rock the Aleutian Islands, some closer to populated areas.

Tsunami.gov issued the alert for coastal areas of Alaska, warning that "significant inundation is possible or is already occurring." Residents of the area are moving inland, or to higher ground.

"Tsunami waves propagate at the speed of a jet liner at about 500 miles per hour. There's plenty of time to issue an advisory or warning," said Oppenheimer about possibly expanding the warning zone.

Seismographs originally measured the quake as a 7.1 but the U.S. Geological Survey quickly upgraded that number to an 8.0, before downgrading it to a 7.9 in the afternoon.  That's a departure from the usual pattern where quakes are more often downgraded.  An 7.9 quake is exponentially stronger. 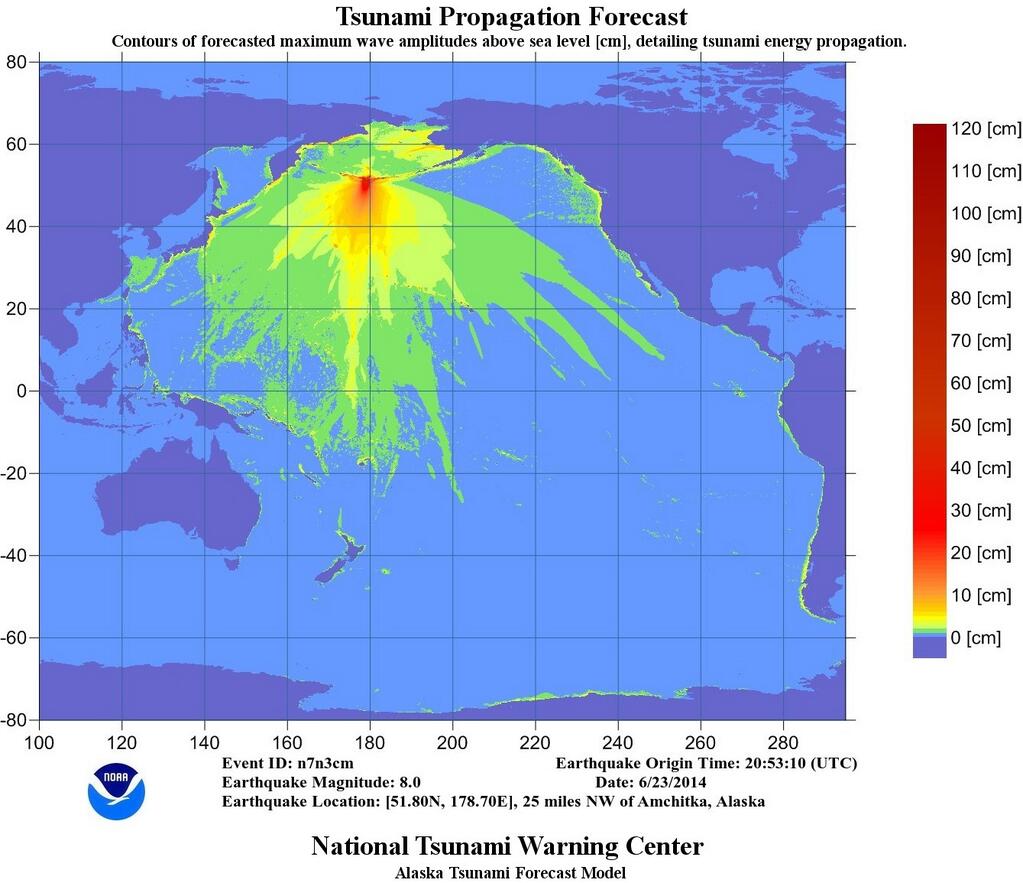 The extreme depth of the quake at 68 miles deep prevented a more widespread Pacific-wide tsunami.

The Pacific Tsunami Warning Center does warn that some coastal areas in Alaska and the Northwest may experience "non-destructive sea level changes" for several hours.

Another massive quake, this one registering 6.9 struck just before the Alaska quake on the polar opposite side of the ocean, north of New Zealand and seismologists say they may be related.

Alaska is prone to the most devastating tsunamis known.

This year marks the 50th anniversary of the 1964 earthquake and tsunami that destroyed so much of Alaska, and sent a series of deadly waves down the coast, wiping out much of Crescent City, California. That quake measured a 9.2 magnitude.

One of the largest mega-waves ever recorded--at 1,720 feet--devastated Alaska's Lituya Bay in 1958 after a 7.7 magnitude quake. The height of the wave was measured by the devastation on both sides of the headlands, where trees were stripped or ripped from their roots. The inlet has a shape nearly perfectly constructed to amplify the power of massive earthquakes, in addition to the glacial activity following an earthquake creating massive landslides and glacial calving.

MOST COMMENTED:
CLEAN THE HOMELESS:  Only in SF: The 'Shower Bus'
MARIJUANA: The Only Legal Outdoor Pot Farm Is 100% Legal, Or So They Say