BERKELEY (CBS SF/AP) -- A rally to show support for President Trump was met by an equal number of opponents Saturday, trading jeers, taunts and punches that led to 10 arrests and seven people being treated for injuries at a Berkeley park.

Under the watchful eyes of a large number of police officers, the two sides milled about Berkeley's Martin Luther King Jr. Civic Center Park Saturday afternoon and verbally jousted. But it quickly degenerated into several fistfights and pepper sprayings.

People wearing goggles, motorcycle helmets, gas masks or with their face half-covered with bandannas were pushing each other, throwing punches and hitting each other with the sticks holding their sings or American flags.

Video of the scattered fights shows smoke bombs being thrown at the crowd and at least one man pepper-spraying a brawling group.

Berkeley Police officers in riot gear have arrested at least ten people at the rally of about 500 pro-Trump supporters and opponents at a park less than a mile from the University of California, Berkeley campus. Five were arrested for battery, four for assault and one for resisting arrest.

Paramedics have helped at least two men, one bleeding from the head and the other with cuts on his face. No one was hospitalized.

For the most part, police officers stood and watched as fight after fight broke out between both sides.

"I feel like they should have done something sooner," said Trump supporter Kyle Stewart, his face bloodied.

BART officials were forced to close the downtown Berkeley station and municipal bus traffic was halted in the area.

At least one Trump supporter was struck by pepper spray, according to social media postings. 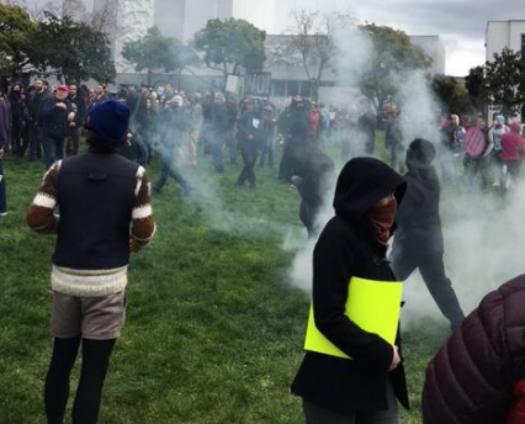 The opponents to Trump chanted "Out of Berkeley" loudly.

Also among the gathering was a small number of protesters wearing the black-clad uniform common to the Bay Area's Black Bloc.

Last month, a protest over a scheduled speech at UC Berkeley by right-wing writer and commentator Milo Yiannopoulos erupted in violence led by members of the Black Bloc.

"This is just more than a March 4 Trump. It's a march for free speech," said rally organizer Rich Black, adding it was also in response to the Yiannopoulos protest.

"This cannot go unchallenged anymore," said Black. "What you saw on February 1st, innocent people including bystanders being physically assaulted by these thugs. Lets call it what it is."

A number of different organizations were there to counter protests including the group called By Any Means Necessary.

Their website that's often used by anarchists also has messages telling people to come out and disrupt the pro-Trump rally.

"Very likely will end up being a violent sort of thing, which is really upsetting to think most likely it's going to come to," said Cal student Monisha Lensink-Vasan.

"He wants to be our president, not the world's president," said one supporter. "We don't need that, we need someone to take care of us at home."

Organizers said Saturday's rallies were meant as a shoe of unity against what they call "a seditious fringe" allegedly trying to sabotage the president.