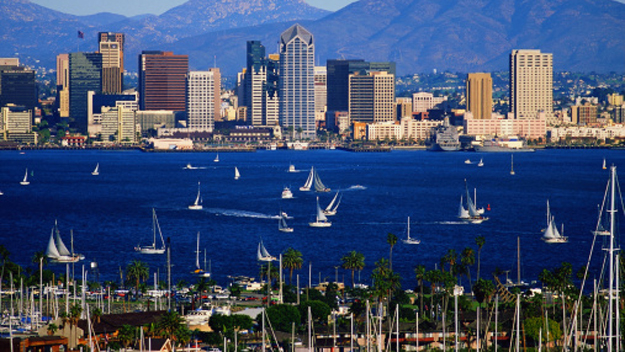 Featuring a splendid Mediterranean climate, miles of gorgeous beaches and world-class attractions, San Diego is a popular destination that can be enjoyed any time of the year. One of the largest cities in America and the second largest in California, San Diego offers a wealth of activities to suit anyone's preference, from families with children to the business traveler. For those seeking practical advice, this valuable travel guide can be an excellent resource for the everything the city has to offer, from the best dining and lodging to the best attractions and activities.

Most visitors flying into San Diego will arrive at the San Diego International Airport (SAN). Located just three miles from downtown San Diego, the international airport serves nearly 500 nonstop and connecting flights from several domestic and international destinations. Among the nonstop destinations to or from San Diego are Atlanta, Chicago-O'Hare, New York-JFK, San Francisco and Tokyo-Narita.

Metrolink's Orange County Line has six round trip trains on weekdays and four on weekends from Union Station in Los Angeles to Oceanside  38 miles north of downtown in San Diego County. Travelers can make connections to San Diego from the North County Transit District.

The three primary routes into San Diego by personal vehicle is via Interstates 5, 8 and 15.

Related: Best U.S. Travel Destinations For You And Your Pet
How To Get Around

MTS is an affordable way to visit many of San Diego's top attractions. The easiest form of public transportation is on the MTS Trolley, with service to attractions like Mission San Diego de Alcalá, Qualcomm Stadium, Old Town, Gaslamp Quarter, San Diego Convention Center, Petco Park and San Ysidro. Visitors wishing to visit Balboa Park and/or the San Diego Zoo can take one of the MTS bus routes, such as Route 7 from the City County Transit Center in downtown San Diego.

Although it's not as affordable as public transportation, Old Town Trolley Tours of San Diego offers hop-on, hop-off service to many of the city's top attractions, including the San Diego Zoo, Balboa Park, San Diego Harbor, Hotel de Coronado and the Gaslamp Quarter.

Although San Diego is the second largest city in California, the average rate of a hotel room is lower than cities in the Bay Area, such as San Francisco, Palo Alto or San Jose. The city of San Diego offers nearly 500 hotel and motel properties, featuring 60,000 individual rooms, providing visitors with a multitude of choices for overnight accommodations to comfortably fit their budget. For budget-minded travelers there are 15 hostels in the city, as well as several more affordable hotels and motels under $100. On the high end is Trip Advisor's top-ranked luxury hotel in California, the Fairmont Grand Del Mar as well as the city's most famous hotel and a must see attraction for visitors, the historic Hotel del Coronado, once the world's largest resort hotel.

As is expected in California's second largest city, San Diego has a wealth of dining options. More than 4,200 restaurants operate within the greater San Diego area, with more than half listed as full-service restaurants. The following recommendations feature 30 of the best restaurants, ranging from cheap eats to fine dining. Affordable options like Canada Steak Burger, Lucha Libre and Devine Pastabilities were named best in the city in its food category and, on the moderate side, Phil's BBQ and Hash A Go Go are exceptionally good. For the finest in upscale dining, Addison, led by Relais and Chateaux Grand Chef William Bradley, A.R. Valentien, one of America's Top 10 Farm to Table restaurants, and Searsucker, led by celebrity chef Brian Malarkey, are among the outstanding spots in the city.

Considered to be one of the world's greatest parks, Balboa Park is the largest urban cultural park in the country. Spread over 1,200 acres, the enormous park is home to 15 major museums, a prominent performing arts venue and other attractions, including the world-famous San Diego Zoo.

Located near the southern tip of Point Loma, the Cabrillo National Monument honors European explorer Juan Rodríguez Cabrillo, who reached San Diego Bay in 1542. The 14-foot-tall sandstone monument is the centerpiece of the attraction known as "San Diego's Hometown National Park" and lies on nearly 160 acres. Other highlights of a tour of the park include the Old Point Loma Lighthouse and a hike to the tide pools with spectacular ocean views.

Located in the central business district, the historic Gaslamp Quarter is one of the most popular dining and entertainment centers in the city. Extending 16 square blocks, the neighborhood gets its name from the gas lamps that were used here during the late 19th and early 20th centuries. Many of the best restaurants in the city are located here, such as Searsucker, Oceanaire Seafood Room. Bice Ristorante and Rei Do Gado Brazilian Steakhouse. Among the top hotels in the Gaslamp Quarter are the Hard Rock Hotel San Diego, Westin San Diego and the Hilton San Diego.

Located in the city of Coronado on the island by the same name, this historic Hotel del Coronado is one of the most famous luxury resorts on the West Coast. Completed in 1888, the grand resort has all the grace and grandeur of a five star property, including luxuriously appointed rooms with ocean views, world-class spa facilities, beachfront dining and upscale shopping. The hotel lies on 28 acres and is a National Historic Landmark. Famous past guests include Marilyn Monroe, Thomas Edison, Babe Ruth, Katherine Hepburn, Charlie Chaplin and Oprah Winfrey.

Encompassing 4,600 acres, Mission Bay is the world's largest man-made public aquatic recreation area. Located just northwest of Old Town, the massive park is home to many outdoor activities and major attractions like SeaWorld San Diego. Mission Bay is also home to several hotels with varying prices. Among the most popular are the Hilton San Diego Resort and Spa, Paradise Point Resort and Spa and The Dana on Mission Bay.

Of the many beaches along 17 miles of coastline in San Diego, the most famous is Mission Beach. Located on a narrow strip of land just west of Mission Bay, the beach features a variety of outdoor activities, a popular boardwalk much like LA's Venice Beach and a historic seaside amusement park — Belmont Park, first opened in 1925.

As the name implies, Old Town San Diego is the oldest section of the city and home to the Presidio of San Diego and Mission San Diego de Alcalá, the oldest of the California Missions, founded in 1769. Often considered the birthplace of California, Old Town lies on 230 acres near the San Diego River and is located 4.5 miles north of the central business district. Other top attractions include Old Town State Historic Park, Old Adobe Chapel, San Diego's first courthouse, the Church of the Immaculate Conception and the historic Casa de Estudillo. More than 25 restaurants operate in Old Town and it is arguably the best place in San Diego for authentic Mexican cuisine.

Featuring more than 3,700 rare and endangered animals of more than 650 species, the San Diego Zoo is currently ranked the world's best zoo by Trip Advisor. The 100-acre zoo also houses more than 700,000 exotic plants, along with special exhibits and options for dining and shopping. The price of admission includes the hop-on, hop-off Kangaroo Bus, the Skyfair aerial tram and all regularly scheduled shows. Among the featured animals at the San Diego Zoo are the polar bears, reindeer, lions, tigers and the world famous koalas and panda bears. For a complete experience, visitors can also go to San Diego Zoo Safari Park, a wildlife sanctuary with separate admission that's home to more than 2,600 animals from more than 300 species.

Once the world's largest ship, the USS Midway is one of the last surviving aircraft carriers from the World War II era. Decommissioned in 1992, the enormous ship once home to 225,000 sailors is now a museum featuring more than 60 exhibits and nearly 30 restoredmilitary aircraft. One other major San Diego attraction, Seaport Village, is just a half mile away.

Although this year's event is over, Comic-Con International San Diego is a major annual event held each summer. Among the featured guests who appeared this year were the main cast members of "Star Wars" such as Harrison Ford and Carrie Fisher, "The Hunger Games" with Jennifer Lawrence and several cast members from "The Game of Thrones."

Related: Guide To The San Diego Zoo
Randy Yagi is a freelance writer covering all things San Francisco. In 2012, he was awarded a Media Fellowship from Stanford University. His work can be found on Examiner.com Examiner.com.