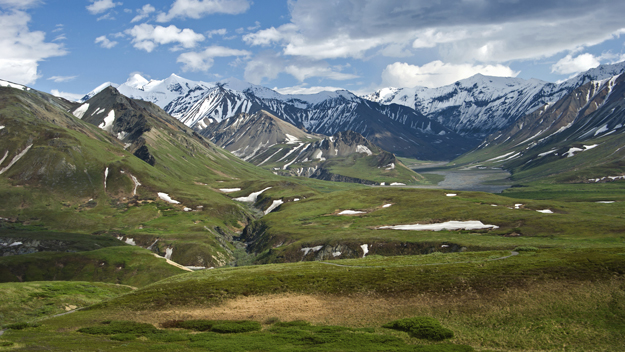 One of the most famous places to visit in Alaska is the incomparable Denali National Park. Encompassing more than six million acres and larger than the entire state of Massachusetts, the park is best known as the location of the highest mountain in North America. Yet despite its lofty status, Denali doesn't rank high amongst the hundreds of units within the National Park Service, drawing just over a half million visitors last year. However, those lucky enough to make the trek are treated to an adventure of a lifetime at one of the most beautiful places on Earth. The following is practical information on what to see, where to stay and where to dine in and around Denali National Park

The closest airport to Denali is Fairbanks International Airport (FAI) located 125 miles northeast of the national park. The largest and busiest airport in Alaska is Ted Stevens Anchorage International Airport, about 245 miles south of Denali. Both airports provide convenient ground transportation options into each respective city, including bus and shuttle services, taxis and rental cars. According to the National Park service, there is only one road entrance into Denali National Park via Alaska Highway 3, also known as the Parks Highway.

Amtrak does not provide rail service to Alaska, nor does the Canadian National Railway. The closest point Amtrak reaches is Vancouver, British Columbia, where travelers can transfer to take a flight out of Vancouver International Airport (YVR) to Anchorage.

The Alaska Railroad provides rail service onboard the Denali Star to Denali from Fairbanks or Anchorage. However, this service only operates from mid-May to mid-September. The Denali Park Depot is located inside the park at Mile 1.25 of Denali Park Road, not far from the Denali Visitor Center. Some transfers to overnight accommodations are available through the respective lodging facility.

By Cruise Ship
Princess Cruises and Holland America offer cruises from Seattle and Vancouver to Anchorage.

Motorists coming from Anchorage or Fairbanks must take Alaska Highway 3 (A3) then exiting at Denali Park Road. The Denali Park Visitor Center is located at Mile 1.5 of the park road. In winter, Denali Park Road is closed beyond Mile 3.4.

Entrance fees to Denali National Park are $10 per person with free admission to children 15 years or younger. Entrance fees, bus tickets and campground reservations can be purchased online or at the Denali Visitor Center. Visitors who purchased entrance fees, bus tickets or campground reservations must present documents either at the Wilderness Access Center or Riley Creek Mercantile, located one half mile from the park entrance near Riley Creek Campground. Mountaineering fees for Mount McKinley or Mount Foraker can be made online and registration must be made at least 60 days in advance of the start date.

Paid shuttle buses allow visitors to board and de-board, and serve five destinations with varying fees. Among the routes is a Camper Bus, providing transportation to campgrounds and the backcountry.

Reservations for all shuttle destinations may be made through the park's bus concessioner, which also handles reservations for tour buses and the campgrounds.

Motor vehicles are allowed on Park Road only to Savage River Bridge, 14.8 miles from the park entrance. Access beyond the bridge is restricted to the free Savage River Shuttle, bicycles and pedestrians.

Visitors are also permitted to bike or walk on any part of the park road, unless a portion is restricted due to a wildlife related closure.

All lodging within the park is operated by privately owned businesses and is located at the end of Denali Park Road, near Moose Creek. Due to the remoteness of in-park lodging, most visitors will stay outside of the park, most notably near the park entrance between the communities of Healy and Cantwell. Not all lodging outside the park operates year round. There are seasonal six campgrounds within the park, with three available for tent or RV camping. All six established campgrounds charge a fee between mid-May and mid-September, but are free during the winter months. Reservations for camping can be made beginning in December. Riley Creek Campground is the closest campsite from the main entrance, not far from the visitor center. Backcountry camping is also available and a permit is required.

Lodging Inside the Park

Campgrounds in the Park
Lodging Outside the Park
Where To Dine

Most dining options can be found outside Denali National Park. However, many business only operate during the peak summer months from mid-May to mid-September. Dining choices range from low cost fare like burgers and hot dogs to upscale Alaskan cuisine. According to the National Park Services, the closest restaurants and conveniences open during the fall, winter and spring are in Healy, 11 miles north of the park entrance.

The only sit-down dining facility within the park is the Morino Grill adjacent to the Denali Visitor Center. Additionally, beer and wine, snacks, sandwiches and groceries may be purchased at the Riley Creek Campground Mercantile and snacks at the Wilderness Access Center.

Outside the Park
Top Attractions

The majority of Denali National Park visitors will do much of their sightseeing within the park by bus. The most affordable options are the courtesy buses, with multiple departures from the Wilderness Access Center and the Denali Visitor Center.

Of the three courtesy routes, the Riley Creek Loop Shuttle has the most departures, running every 30 minutes with stops at many of the parks' top attractions.

For visitors who wish to see the park's sled dog demonstration, the Sled Dog Demonstration Shuttle is the only mode of transportation available. Visitors must check at the Denali Visitor Center or at the adjacent bus stop for departure information.

In addition to the courtesy buses, Denali National Park offers shuttle buses for a fee and tour buses with narration of the park from the bus operator.

Located at Mile 1.5 on Denali Park Road, the Denali Park Visitor Center is a must-see for visitors. The visitor center is the primary center of activity for the park and many other attractions are within walking distance. The visitor center is the best source of park information and offers a number of attractions, including an exhibit hall, a theater presenting the park film "The Heartbeats of Denali," ranger-led hikes and other programs. Also nearby is Morino's Grill, Denali Bookstore at the Murie Science and Learning Center and the Denali Park Depot.

The tallest mountain in North America, Mount McKinley is the premier attraction in Denali National Park. The highest point reaches an elevation of 20,237 feet and, on a clear day, it can be visible from Anchorage and Fairbanks. The majority of recommended spots to view Mount McKinley along Denali Park Road are restricted to park buses or private tour operators. However, the first spot within the park is at Mile 9, which is accessible to both personal vehicles and buses. Other notable spots are at Primrose Ridge at Mile 16, Stony Hill Overlook at Mile 62, Eilson Visitor Center at Mile 62 and Wonder Lake at Mile 85.

Because it's the highest peak in North America, Mount McKinley is a very popular destination for mountaineers. Attempting to climb Denali is only recommended to climbers who have made several other accents to other alpine summits, such as Mount Rainer in the Cascade Mountains or Mount Foraker, also within Denali National Park. Additional information on mountaineering can be found through the National Park Service.

One of the most popular forms of outdoor recreation within Denali is hiking either on a marked trail or off-trail hiking in the wilderness. The most accessible trails can be found near the Denali Visitor Center, including Horseshoe Trail, Mount Healy Overlook Trail and Roadside Trail. Another featured trail is Triple Lakes Trail, a more strenuous hike estimated to take 10 hours round-trip. The National Park Services lists other marked hiking trails within the park, including three far beyond the visitor center — Savage River Loop near Miles 13-15, Tundra Loop near Eielson Visitor Center at Mile 66 and McKinley River Bar Trail at Wonder Lake at Mile 85.

Park visitors, especially families with children, can enjoy a visit to the sled dog kennels. In use at Denali since 1921, the sled dogs are unique to the National Park System. Most of the sled dogs are bred here, and a new litter of puppies is born here every spring or summer. The kennel is home to about 30 dogs, whose primary duties are to provide transportation for park rangers during the winter and entertain guests in the summer for sled dog demonstrations.

During the peak season, ranger-led sled dog demonstrations are held three times a day. Visitors can watch a ranger demonstrate how a team of Alaskan huskies work together.

The sled dog kennels can only be accessed via the free Sled Dog Demonstration Shuttle from the Denali Visitor Center. An alternative to the park's dog kennels is Husky Homestead, the home of four-time Iditarod champion Jeff King.

Related: Top Mountain Climbing Destinations In The U.S.
Randy Yagi is a freelance writer covering all things San Francisco. In 2012, he was awarded a Media Fellowship from Stanford University. His work can be found on Examiner.com Examiner.com.